Today there were many NHS demos, including one in Newcastle. This is in response to the appalling pay rise of 1% from the government. 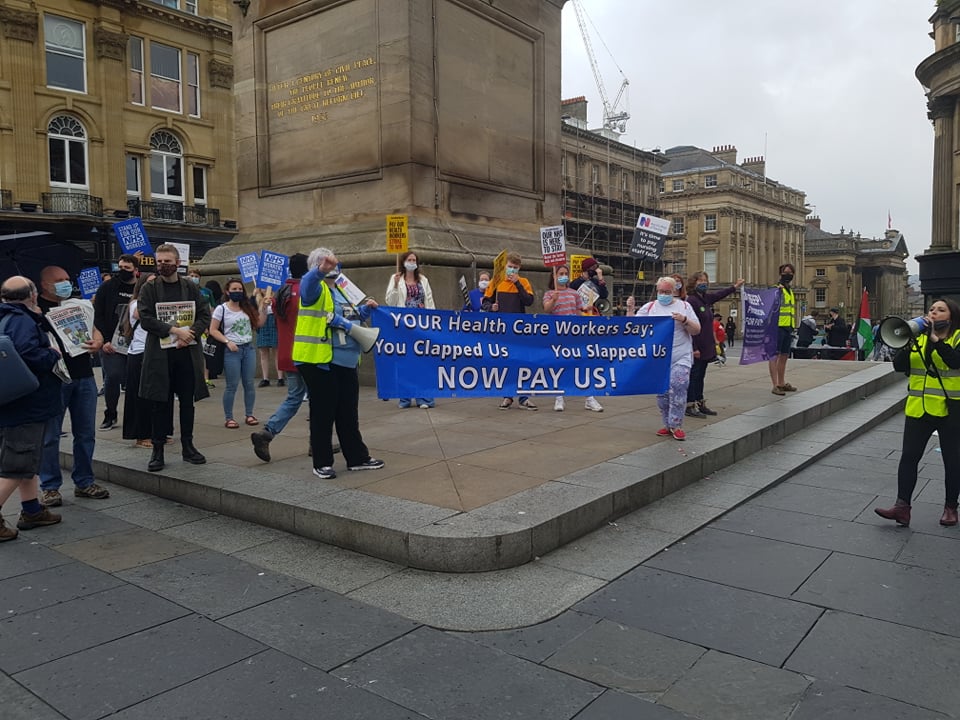 Today NHS demos took place all across the country on the 73rd birthday of the NHS. This was to protest about the appalling proposed pay rise of 1%. A march took place in Newcastle from the RVI to Grey’s Monument. It attracted a good turnout despite the rain.

Earlier this year the government delivered a huge blow to NHS staff by proposing a 1% pay rise for those working in England next year. This includes a whole array of workers such as nurses, doctors,  paramedics, porters, cleaners, physiotherapists and Occupational and Speech and Language therapists. These are the people who have put their lives at risk continuing to work on the frontline over the last year while watching so many of their colleagues become ill or die from Covid-19.  Remember they did this during periods when sufficient PPE was not always available and until very recently, without being vaccinated.

The risks of doing your day-to-day job

Being a health professional myself, I have personally known former colleagues who have died or become seriously unwell from Covid-19. It is indeed the scariest feeling ever thinking you could be at such high risk just from doing your day-to-day job. I have friends in the NHS who were so scared of bringing the virus home that they have lived separately from their families for months at a time.

Some who have worked in intensive care have also described the post traumatic stress that hit them after seeing so many people become seriously ill or die from Covid-19. As visitors are mostly not being allowed into hospitals, NHS staff are often the only people who can physically be present to comfort dying patients. Setting up final goodbye calls on Facetime can also be particularly harrowing for all involved.

The health unions and NHS demos

Is it any wonder that health unions are up in arms at the announcement of this measly pay rise when their members have had to go through such turmoil and anguish? Sara Gorton, head of health at Unison said:

“A 1% pay rise is the worst kind of insult the government could give health workers who’ve given their absolute everything over the past year. The public will be horrified. Staff will think it’s some kind of joke”.

Indeed the government is facing a major backlash already over this, with “The 1%” trending on twitter with thousands upon thousands of users expressing their disgust. Colenzo Jarrett-Thorpe, the Unite national officer for health, said that the union would be considering all options, including holding a ballot for industrial action.

Due to an expected rise in inflation over 2021, this 1% “pay rise” actually translates as a pay cut for health workers in England. Conversely, NHS and social care staff in Scotland received a £500 bonus a few months ago to thank them for their service during the pandemic. This included staff who have had to shield or who have since retired.

Even pre pandemic, on average NHS staff work 11 hours extra per week for free and commonly do not get to take a proper break while on duty. Yet this is how they are thanked for all their sacrifices. A colleague who wished to remain anonymous told me “being clapped is not going to pay the bills”.

Business Secretary Kwasi Kwarteng’s response to the criticism has been to say that while the perfomance of the NHS had been “first class”, the whole economy has been under huge pressure and many people in the private sector faced losing their jobs. The government have also justified their decision by saying NHS staff have been excluded from a pay freeze that has been placed on most public sector workers.

This includes other frontline staff such as teachers who have also worked tirelessly throughout the pandemic. Schools have still been open for huge numbers of pupils even during lockdown to support those who are deemed to be vulnerable and children of keyworkers. Let us not forget that teaching staff have still not been made a priority to receive the vaccine either and schools are re-opening to all from Monday.

Remember when Boris Johnson promised an extra £350million per week to the NHS from the alleged savings made from EU membership only a few years back? With Brexit now completed, it is interesting that this has not materialised in any such way, including to the salaries of NHS workers even when they have put their lives on the line.