In part 2 of Passage to India, Chris Humble arrives in Kathmandu and discovers karma. 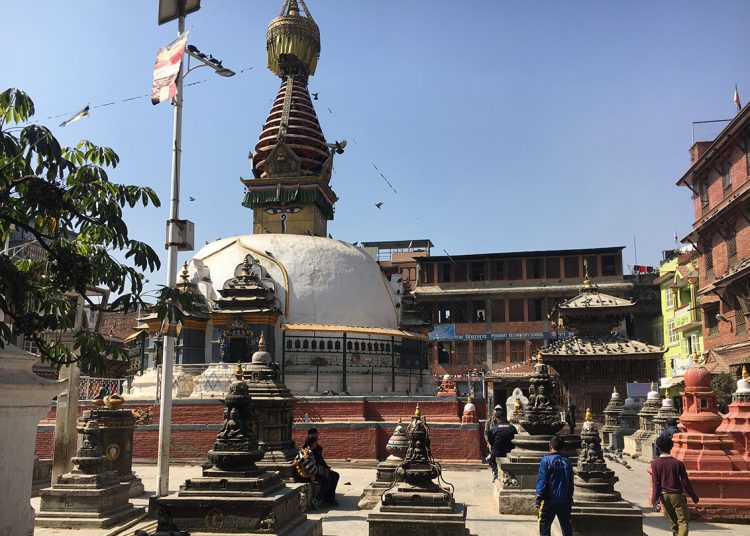 Four years ago Chris Humble spent six weeks travelling around India. What started largely as escapism from a difficult time in his life turned into an extraordinary – and sometimes hilarious – pilgrimage. The very personal blog Chris wrote at the time was only sent to a handful of close friends; with the passage of time and renewal in his life Chris now feels able to share his unabridged story with a wider audience.

Having heard much about karma in the previous few days I had a direct involvement in some at Delhi airport. Having, at the third attempt, found the correct queue to join (this just for ticket collection prior to entry to the terminal) I found myself in line for the Jet Airways counter, behind a small bald diminutive American gent in his 40’s. The woman in front of him had a sudden and extensive collapse of her baggage mountain, which he quickly leapt forward to assist in reassembling. Then, as he was being served at the counter, some kind of issue arose in the parallel queue over a cash payment required of 500 rupees (about £4.50). The customer concerned had no cash. Without hesitating our American friend handed over the required amount with a smile and a nod. “Nice guy”, I thought.

He was then issued with his ticket and disappeared into the melee of the airport. I moved up to the counter to obtain my ticket. A couple of minutes into this process I noticed an iPhone that had not been immediately obvious, sitting on a lower shelf. I waved it at the person serving me. “I think that guy left his phone here”. I received the classic Indian shrug. “No”, I said, “We have to get it to him”.

A manager was summoned at my insistence. “Follow me” he said – and swept me through into the main terminal with my not inconsiderable luggage in tow. Seeming oblivious to the fact that my burden rendered me incapable of moving at his speed, the official hurried me round all four corners of the terminal, gesturing for me to examine the assembled throng. It became frustrating, I became hot and bothered; the guy should be easy enough to spot, the airport was full of Indians, small white bald men were at a premium. Suddenly I saw him not four yards away.

“That’s him” I almost yelled in relief, my arm outstretched in an incriminating point. The big and official looking manager pounced on the small American who recoiled in abject horror, flicking his glance between what he understandably perceived as a huge authority and an equally large accuser. I sidled up to him, “I’ve got your phone” I said’, ‘you left it at the ticket counter’.

His relief – I suspect more in comprehension that he was not going to spend the night in a Delhi police cell falsely accused of some misdeameanour, as for the return of his phone – was palpable. “Why thank you sir” he said gratefully. I put my arm around him and leaned in confidentially:

“It’s karma my friend, I saw you helping those people at the counter”.

I swaggered off feeling quite the guru.

An introduction to Nepal

Unexpectedly (and I was only made aware of it by the car salesman from Kathmandu in the neighbouring seat) I had a clear view from the plane of the peak of Everest as we entered Nepalese air space. As far as I could determine we were only marginally higher than the mountain.

Despite having being informed whilst in Delhi that Kathmandu had experienced minor earthquake tremors just a few days previously (news I had missed whilst travelling but which was obviously of concern following the devasting quake of 2015) I found I couldn’t really work myself up into a lather over this. “You can’t explore the world without taking risks”, I thought, “If I die, I die, is there really going to be anyone that bothered” I considered glumly.

I had a free day before linking up with my trekking group. With Lonely Planet faithfully in hand I set off to walk from the winding bazaar-filled streets of the Tamil area where my hotel was located, to Durbar Square, the spiritual centre of Kathmandu and location of many temples and monuments. Inevitably I became hopelessly lost fairly rapidly amongst the razzmatazz and constant offers of everything from fridge magnets to rickshaws. In an echo of Delhi a friendly young man walking past engaged me in conversation, and helpfully took me to a couple of sites he felt I shouldn’t miss en route to Durbar Square, including a temple where I lit a candle, prayed, and received the red spot daubed on my head that is for “your mind, your mouth, your heart”.

“This guy is another good’un”, I thought, and asked how much he would charge to be my guide for the morning, including to Durbar Square. In case you’re thinking this was a little patronising let me assure you that in this part of the world people are more than happy to make a little money in this way and are more than willing to help. Indeed they foist this service upon you, but I like to pick my own guide….

“Well we’ll sort something out later” I reasoned, and followed him. He took me to several spots I would never have discovered with or without Lonely Planet including an extraordinary small hidden square where perfect and immaculate Buddhist architecture fought a battle with it’s neighbouring building – a pile of rubble, victim of the ’15 quake – for my open-mouthed attention. This really brought home to me the arbitrary nature of natural disaster.

Momos and other things

A lunch of MoMos, a delicious Nepal delicacy resembling large ravioli but so much more spicy and delicious, followed in a ‘cafe’ recommended by my guide. Smaller Indian and Nepali eating houses bear no comparison with those we are used to in the west. Some of them seem filthy and chaotic, and this was a prime example. Maybe they are, but I can only assume that the food is cooked hygienically as I had been there for two weeks now and did not suffer ‘Delhi Belly’. Rather the opposite.

Those of a delicate disposition may wish to skip this paragraph as I jump forward a few days….I realised that I had not been for ‘number two’s’ since arrival in Nepal. This despite a demanding trek and the consumption (as a result of the energy expelled) of three meals a day and considerably more than my usual quota of liquid, alcoholic or otherwise. I concluded that I was suffering from a rival stomach issue – ‘Kathmandu no can poo’. Thankfully, matters resolved themselves before I left the country – it could have been awkward explaining a 10 pound weight gain in 7 days to Indian immigration…..

Back to the MoMos and my friendly guide, who had revealed that his name was Gloria. Not entirely convinced I had heard him correctly I asked him to spell it. Yup, Gloria it is. He wouldn’t share my food or let me buy him any; indeed he insisted on paying for mine despite enormous protestation. “Taking money from you is bad karma” (that word again) he said. “Perhaps you buy me some groceries for my family”. “Of course” I agreed.

Gloria had told me over lunch that his parents had been killed in the ’15 earthquake, his shoemaking business had been destroyed, and he now scraped a living however he could to feed his wife and three daughters. We looked at a couple of other sites and then he said, “We are close to my home, perhaps we buy food now and then I take you to Durbar Square.”

We went to the grocery store. He ordered about six large cartons of milk powder, a huge bag of rice, some chocolate, and a few other assorted items. I realised I had left my Nepali rupees in the hotel and was armed only with US dollars – the alternative currency readily accepted. “20 bucks will cover this”, I thought, “And I’ll bung him another 20 whether he likes it or not”.

“120 dollars” the shopkeeper announced sincerely. I spluttered protest. “Very expensive is the milk powder, imported”, he assured me.

Of course I saw the sting in a flash. But I allowed it. Gloria had been a perfect guide. Maybe he didn’t have two dead parents, three starving children, and a quake hit business, but I chose to believe that he did. Whatever he had, it was considerably less than me; whatever his need, it was considerably greater than mine. I peeled off the bills and handed them over. Gloria guided me to Durbar Square, or rather the top of the street that led to it. He pointed the direction out to me. I had assumed he was going to guide me round the square as discussed, but he was clearly in a hurry to return to the shop, where he would no doubt receive the $100 due to him following the store owners commission for returning the unwanted milk powder to the shelves.

“Thank you”, he said, enveloping me in an enormous hug, “this food will feed my children for three months”. I was doubtful about that, but considered that the $100 just might…”God bless you and your family” I said, returning his embrace.

That evening I met my accomplices in my planned trek through the foothills of the Himalayas, together with our guide Suna. John and Debbie were an Australian couple in their early 60s. they were easy-going and friendly enough, and quickly established with Suna that they would be able to buy alcohol in the evenings of our four day expedition, before I had a chance to raise the issue – which endeared them to me enormously.