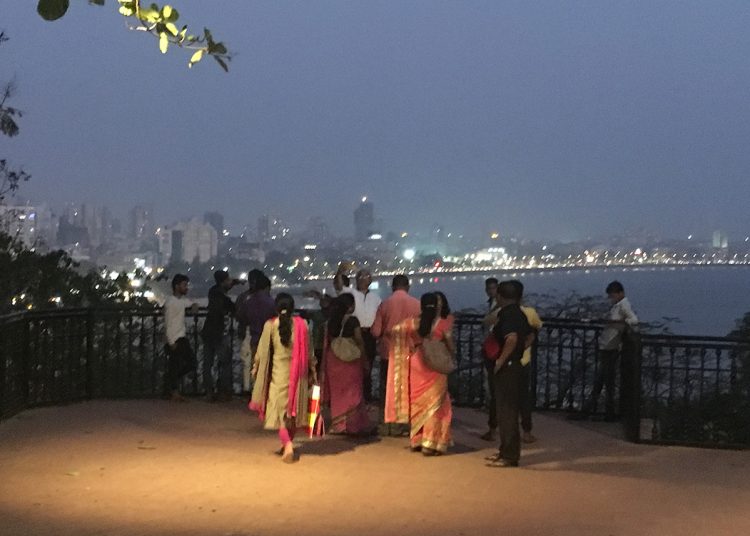 The humidity hit me like a wave as I walked down the steps of the plane at Mumbai International Airport. My whole journey had been fairly hot excepting the Himalayas, but this was the first hint of tropical heat.

The population of Mumbai is 22 million, which, for neat comparison’s sake, is one third of the population of the UK. It is a vast city with various different ‘centres’ and has a vibrancy and eclectic feel that was not in evidence in Delhi. It feels like a capital city, but that honour goes to its northern counterpart.

I followed my usual practice of dumping my bags at the hotel – which was a nothing to speak of establishment in a side street but at a good central location near the waterfront – and heading straight out to explore whilst daylight lasted. As I walked along the sea front, I realised I was not being hassled by Tuk Tuk drivers or indeed anyone else. This was novel. It remained that way throughout my stay in Mumbai, adding to the impression of a more western style city where people have enough business and are too busy getting on with it to bother about you. It also confirmed the evident affluence of Mumbai compared to other cities I’d visited.

The draught ending bar in Mumbai

Of course, I’d done my research, and my wandering didn’t last too long before I was heading for Cafe Leopold, which still preserves the bullet holes in its windows from the terrorist attack it was caught up in ten years ago this coming November. However, it was not for recent history I was visiting this establishment, but rather in a bid to banish to history the aeons of time I felt I’d endured since last tasting draught beer. I’d been assured this was the place to end the draught drought is and – voila! – there on the bar was a gleaming silver tap. Licking my lips, I ordered the first and sat down to look at the menu. Oh, still my beating heart! Steak! How was this possible?

Now I know you will say that this was just a reaction to being starved of my creature comforts, but the steak and ale I consumed in Leopold’s airy saloon bar that evening was some of the finest I have ever tasted. The steak in particular was melted in the mouth magnifique. My only slight grouse was that the service was dreadful. However, I could hardly complain; you will recall from the last chapter that I was desperate for draught beer, steak, and to be ignored. My three wishes had been granted in one go!

A tour of the highlights of Mumbai

The next day comprised a morning tour of some of Mumbai’s highlights, after which I was free to entertain myself. My guide was another Asif, and he was quick, efficient, helpful, and mercifully non-droning! We shot round the sights taking in the Gateway Of India – a huge stone arch on the quayside erected to commemorate the landing of King George V and Queen Mary in 1911, the architecturally magnificent Victoria Terminus – I do like a good railway station, an open air laundry – no tumble dryers needed!, locals playing cricket in the park, and then, to my amazement, a long parade of Art Deco buildings overlooking the Indian Ocean – or Arabian Sea as it is referred to locally. I had no idea Mumbai had an Art Deco quarter. I love Art Deco buildings, an interest mainly inspired by the fabulously preserved examples on Ocean Drive Miami. Those on Marine Drive Mumbai were a splendid though somewhat grubbier echo of their seafront companions a couple of continents away.

We also visited the house where Gandhi had lived and been arrested from. For some reason this moved me even more than the fantastic Gandhi exhibition I’d visited in Delhi, and once again on this emotional journey I was overwhelmed and reduced to tears.

The delicious but non helping tea

My bowels were still creating, and Asif stopped to buy me a glass of masala chai (tea). Wow! What an amazing brew. Full of spices with a predominance of ginger, Asif assured me it would help my ‘problem’. It had no discernible effect, but it was delicious. I ordered it later in my trip, but it wasn’t the same as this street purchase. However, it was a huge improvement on the regular chai that I’d suffered several times, a sweet milky tea which is a hangover from the Raj.

Walking the deck and more beer!

Impressed with Asif I asked him what he recommended I do with the remaining day and a half I had in Mumbai. He recommended walking the full length of Marine Drive at dusk to further appreciate the Art Deco architecture and the general ambience, as it is where Mumbai hangs out at day’s end. I did that and it was great. Buoyed by my draught beer success of the previous evening I then took a ridiculously cheap Uber to the other end of the city, on Asif’s recommendation, to an enormous shopping centre which contained, as promised, The Beer Cafe. The choice of beverages was not quite as advertised but I settled on an unlikely pear flavoured light ale which went down very nicely.

The ’Street Food Tour’ in Mumbai

The next day involved a good deal of lazing around by the hotel pool until the evening, when I embarked on a ‘Street Food Tour’ led by Asif. This was a real highlight. We started with a stroll round the Hanging Gardens – a wonderful green area overlooking the city which put me in mind of a cross between Greenwich Park and Hampstead Heath. ‘Street Food Tour’ was a bit of a misnomer as we ate in three cafes/small restaurants. Asif explained that he couldn’t rely on the hygiene from actual street vendors but that the places he took me were serving authentic local dishes renowned for their quality. I was able to verify this from the food, which was delicious and unusual (to me), and the crowds of locals patronising the establishments. One place had a queue along the street which we somehow bypassed with Asif’s astuteness and/or contacts.

I like Mumbai. If, or more likely when I return to India, my first choice would be to fly there rather than Delhi.