Carol Westall reports on a successful bonfire night in both Northumberland and Tyne and Wear. Thanks to our fire services. 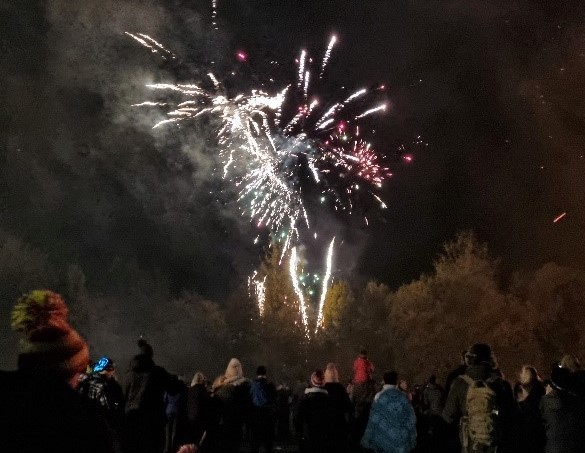 Many of us enjoyed the fireworks, the great fire, food trucks, the presence of fire fighters and shortage of incidents requiring them. The Lions event was much appreciated.

Firefighters across the rest of Northumberland had a busy Bonfire night and handled 343 calls.

“Although we have had a busy night, due to the working closely with partners such as Northumbria Police and Northumberland County Council, both on the night and on the run up to the event, the night was enjoyed safely by our residents and the fire crews.”

Bonfire Night in Tyne and Wear

In Tyne and Wear the 5 November bonfire night was also hailed as a success.

Fire Service bosses have praised the success of and thanked the public – parents and guardians in particular – for passing on the important messages to their children and relatives about the dangers of fire, fireworks and anti-social behaviour.

On the evening of 5 November the Tyne and Wear FRS control room handled 356 calls, this was a 22.4% decrease from last year’s Bonfire Night (459).

“Bonfire Night can be a very dangerous time of year and we would like to thank the people of Tyne and Wear for taking on board and appreciating our annual safety messages in the build up to November the fifth.  The resulting figures speak for themselves with the majority of areas falling significantly from last year.

“The success is down to partnership working with our blue light colleagues and other public sector organisations including local authorities. This saw effective community clean ups across the whole of Tyne and Wear, where discarded objects were removed in advance of Bonfire Night, and schools across the region received online fire prevention packs to talk about in class.  We hope this trend of care and awareness continues all year round as we still need to hit home that respect needs to be given to our emergency service crews and colleagues as they help serve the local community.”

Despite the reduction in figures, TWFRS did still record six attacks on their crews across the Bonfire weekend.

Nobody was injured during the incidents, where missiles were thrown at the appliances, and enquiries to identify those responsible will continue alongside Northumbria Police.