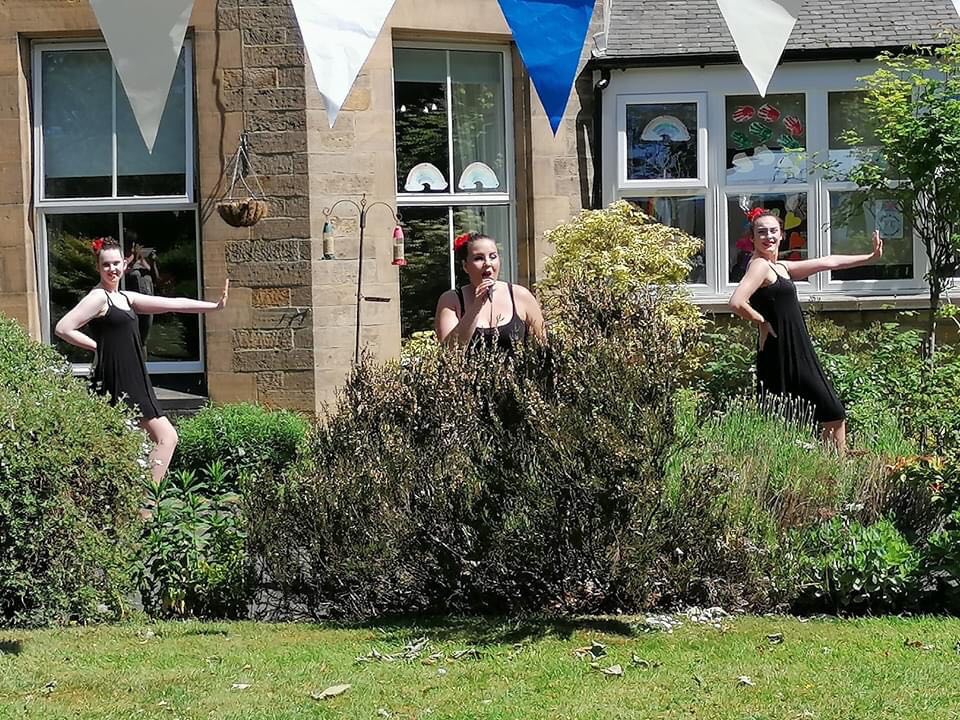 If someone had told me four months ago that Absolute Cabaret would be putting a show together without actually seeing each other in person until the day of the show, rehearsing everything online and then not being able to get closer than two metres to each other on the day of the show, I would have thought that it was an impossible task. But here we are – four socially distanced shows later, with several more in the pipeline.

I created Absolute Cabaret in 2018 with my partner, Suzanne Richardson. The idea behind the group was to provide fun, affordable entertainment to the Sunderland area and beyond. We’ve created over 50 shows in the last two years with venues that included village halls, schools, hotels, Smooth Radio promotions, political rallies, pubs, bars and the care sector.

During this lockdown period, it was the care sector that I was most concerned about. My dad spent the last few months of his life in a care home and I came to realise at that time how important family interaction and entertainment becomes. A large proportion of our shows are performed in residential and nursing homes and assisted living venues and it made me sad that residents were not only missing out on seeing their families, but also missing out on some of their regular activities as well.

In my head I committed Absolute Cabaret to providing ten free shows to the care sector during lockdown with shows in Hetton, Howdon, Washington and Ryton now under our belt we look forward to spending the rest of the summer meeting our target. If the last four months has taught me anything at all, it’s that there’s some truth in the old saying ‘if there’s a will, there’s a way’. With our dedicated and hardworking cast, the impossible has been made possible.

As a dance teacher and choreographer, I’m used to physical interaction – manoeuvring legs, arms, hands, feet into ‘just so’ positions; the relationship a choreographer has with their students is unlike any other I’ve experienced. There’s a level of trust – on both sides – that’s solid and difficult to break. There’s a lot of hard work and sweat and frustration, but most of all joy at the hours spent in the studio working on new choreography and routines. There’s a real sense of team spirit and no one can ever underestimate the amount of love and laughter that happens in the lead up to a show, how many memories are created and how many ‘in-jokes’ are born.

In February the word ‘zoom’ meant nothing more to me than a fast moving vehicle, I could play music while being in the same room as my dancers, and everyone could hear it at exactly the same time. We could stand close to each other and even – if the need arose – make physical contact. Fast forward four months: I’m still not technologically savvy but I’m better than I was at the end of 2019.

We’ve had to rethink our entire way of working and putting a show together. We’ve rearranged choreography so there’s no physical contact or physical closeness. We also determined at an early stage that all of our performances would be outside – and that once a date was set we would perform on that date, regardless of the weather. We rethought costumes, creating a layered effect so items could be removed and added depending on our changeable British summertime. Adding accessories, we could retain some level of ‘glam’ despite the wind and rain. It was essential that long hair was tied up so not to succumb to the elements.

I can’t write this article without mentioning and giving credit to our amazingly talented, hardworking MD Suzanne and dedicated, wonderful singers who also had to adapt to an entirely different way of working. Suzanne couldn’t teach the singers online because the internet delay makes it impossible to learn songs that way, so she spent hours recording herself singing to send the tracks, or her singing along with backing tracks, to our singers so they could learn the songs by listening. We also had to ensure that singers could be heard without a microphone, should rain render electrical equipment unsafe.

I cannot thank the entire Absolute Cabaret team enough. Their dedication, ability to adapt, kindness, patience and hard work has ensured that we have continued to be able to provide entertainment at this time, for those that need it most. For the future, my hope for the arts is that we can all continue to create and entertain. The government have taken a first step in the right direction to inject money into the arts. Whether it will be enough remains to be seen, but I hope that the entertainment industry is recognised as an essential part of our lives. We could not live without TV, music, films, fashion, literature, music, artists and live entertainment. I wish all my fellow creatives and artists lots of love and luck as they start to rebuild their businesses and careers.