Beneson's call to action was a heartfelt response to appalling abuse of power by state apparatus. 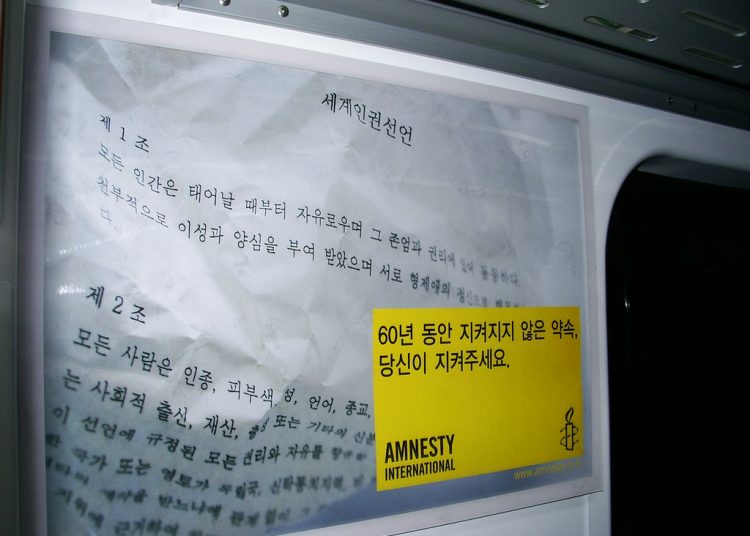 “Open your newspaper any day of the week and you will find a story from somewhere of someone being imprisoned, tortured or executed because his opinions or religion are unacceptable to his government…”

These words are taken from an article by the late British lawyer Peter Benenson entitled “The Forgotten Prisoners” which was published in The Observer on 29 May 1961 yet they could have been written today. Benenson put pen to paper 60 years ago after learning of the imprisonment of two Portuguese students for raising a toast to freedom. (At that time the dictator Salazar ruled Portugal. The country only became a modern democracy in the 1970s following the Carnation Revolution.)

The beginning of Amnesty International

Peter Benenson’s article launched the “Appeal for Amnesty 1961”, a worldwide campaign that provoked a huge response. Reprinted in newspapers across the world, his call to action resonated with the values and aspirations of decent people everywhere. This became the genesis of Amnesty International, the world’s largest grassroots human rights organization. It is a movement of more than ten million people that I was proud to work closely with during my time as a MEP.

How to join Amnesty International

Anyone can join Amnesty International and get involved at local level as well as participating in mass campaigns to protect the lives and freedoms of people under threat in countries all around the world.

Here in the North East there are local groups in Newcastle, Teesside, Hexham and Wearside. Although the pandemic has prevented in-person events and meetings over the past year it has also created opportunities for closer collaboration between local groups.

“”Amnesty International local groups enable people living in the area to raise awareness of human rights issues that matter to them. For example Malu Velez (pictured above) is working to raise awareness of the violent repression of protest currently taking place in her country of origin, Colombia.””

On Friday 28 May representatives from North East Amnesty International groups attended a 60th anniversary commemoration event at Sunderland Minster. Glasses were raised in a toast to freedom in front of a stained glass window depicting the iconic Amnesty candle. This symbolic act is hugely important, not only as a mark of recognition for all the thousands of cases that Amnesty International has worked on over the decades, but also as a means of raising awareness of the ongoing violations that need our attention today.

“Amnesty International has been saving lives for 60 years. It is so important that we acknowledge and celebrate the difference that Amnesty has made not just to tens of thousands of individuals, but to the whole of human history. It’s the steady pursuit of fairness that produces a world that is safe and just. Join Amnesty International today, and you can play your part in this incredible human endeavour.”

As an Amnesty International member I receive frequent communications by email and text simply asking me to add my name to letters and petitions responding to urgent human rights abuses. In the past month I have received messages about the British-Iranian dual national Nazanin Zaghari-Ratcliffe who has been repeatedly jailed on various trumped-charges by the Iranian government in an apparent diplomatic spat with the UK over a long-standing unpaid debt. I also received a message about the aid worker Abdul Rahman sentenced to 20 years imprisonment by a court in Saudi Arabia for making satirical posts on Twitter.

But the Middle East is not the only focus for Amnesty International campaigns. Just this week we witnessed the shocking abduction, detention and forced confession of the 26 year old dissident journalist Roman Protasevich and his girlfriend by the Belarusian security forces. True to form Amnesty International swung into action mass messaging its community of supporters. It is worth noting that Belarus is the only country in Europe which still uses the death penalty and Protasevich is clearly at risk of execution. Abolishing the death penalty is one of Amnesty International’s long-standing campaigns.

Steve Newman, Chair of Amnesty International’s Wearside Group and one of the organisers behind Friday’s event, first got involved with the charity after travelling around the Asian sub-continent in the 1980s. He learnt about a wide range of human rights abuses in places like Burma, now known as Myanmar, where military rule has recently returned bringing with it a crackdown on students, trade unionists and others who dare to protest.

Amnesty International works to protect people wherever justice, freedom, truth and dignity are denied, whether that’s in the global south or here in the UK. Current campaigns include a continued focus on Northern Ireland’s failure to commission appropriate healthcare services following the decriminalisation of abortion. It also opposes the Conservative government’s Police, Crime, Sentencing and Courts Bill which threatens to restrict our right to protest.

Beneson’s call to action was a heartfelt response to appalling abuse of power by state apparatus. He intended a simple year long campaign focused on ‘prisoners of conscience’. 60 years later the work of Amnesty International continues to be just as important. Sustained pressure from the charity has changed laws in dozens of countries on issues such as refugees, reproductive rights, LGBT equality, free speech and the death penalty. Last year alone public support from people like you and me helped free 153 people who were wrongfully imprisoned because of who they are or what they believe. In these bleak times that’s something to celebrate.

To find out more about local groups in the north east contact steve.newman@amnesty.org