Emmanuel Gomes was a Ministry of Justice cleaner, who died during the pandemic in April 2020 after working for five days with suspected Covid symptoms. He could not afford to take time off work. 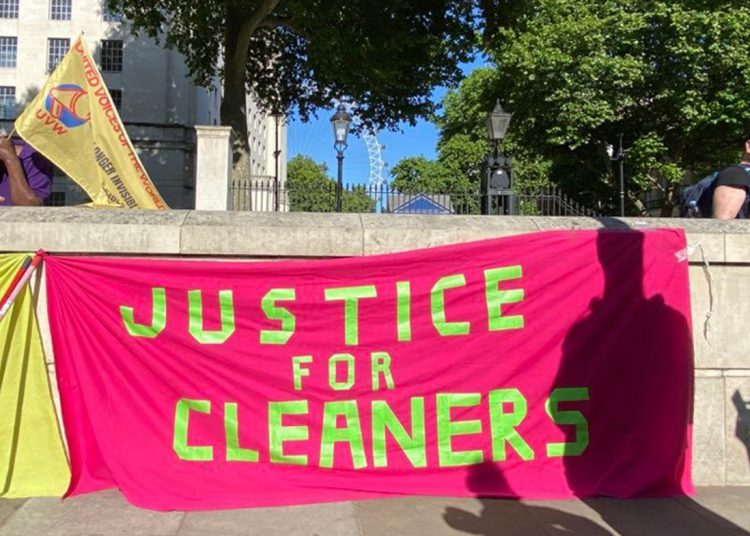 Are cleaners third rate citizens? It’s a provocative question that might never cross our minds. We are all equal, aren’t we? In fact it seems that cleaners and security staff at 10 Downing Street were treated as even less than third rate citizens. This was by staff who partied long into the night leaving a gigantic mess of empty bottles, wine stains everywhere and even vomit during lockdown.

Too late, Johnson. It was your callous and cavalier attitude that caused this drink fuelled wild parties and no number of feeble apologies will make a difference now.

Open Democracy reported on Emmanuel Gomes. He was a Ministry of Justice cleaner, who died during the pandemic in April 2020 after working for five days with suspected Covid symptoms. He could not afford to take time off work.

Gomes belonged to the United Voices of the World (UVW) trade union who organised at very short notice a demonstration outside 10 Downing Street on Friday 26 May in his memory and in solidarity with all cleaners and security staff who work in government buildings.

I attended the demonstration with two friends and found it a humbling experience. It was important to be there to show solidarity. As I listened to the speakers, I felt deeply moved. With little economic power, many on minimum wages and with poor employment conditions so many workers are totally exploited by the system.

The Gray report findings on the mistreatment of the number 10 staff to be beyond shocking. It goes straight to how we treat our fellow humans. We read of civil servants, government special advisors and others drinking and partying late into the night while people were dying in people’s homes, care homes and hospitals. One of the banners held at the demonstration read:

“They partied while workers died “

The disrespect and distain shown to all us who followed the rules and to the government staff is way beyond my comprehension and understanding. I find the current Prime Minster to be perhaps the worst I could ever have imagined possible. His insulting elitist, entitled and cavalier approach to rules and normal standards of decency is terrifying.

Is there anything at all that we can do to restore trust in our democracy?