Since 2009, Newcastle has witnessed a number of far-right protests, led by organisations such as the EDL, Pegida, National Action and North East Infidel, which at their peak attracted 1,500 demonstrators. 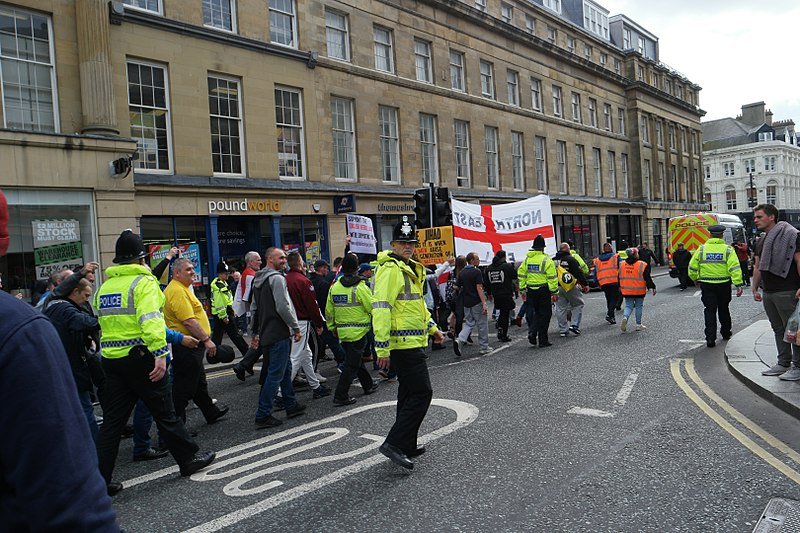 The stain of anti-Semitism has rocked the British Labour Party in the last two years. For Philip Spencer, professor of Holocaust studies at Kingston University, the shame of far-left anti-Semitism has a long history. In his book, ‘Anti-Semitism and the Left’, co-written with Robert Fine, it is stated that the roots of today’s crisis in Labour stem back to the 19th century where Jews were seen as a problem and part of a ruling capitalist class by a strand of socialist thought.

But we must not forget this is also the hallmark of the new far-right. Teesside University historian Paul Stocker argues that the far-right’s re-emergence is a cultural phenomenon. The rise of groups like the National Front (NF) and the British National Party (BNP) was a direct response to immigration in the 1950s and 60s. In 1967 the NF, a far-right party was founded. Its main belief was a redefinition of the ‘real’ British community based on ethnicity.

For the NF only Anglo-Saxon whites were seen as the ‘true Brits’. It’s former leader John Tyndall called for the resistance to ethnic integration well into the 1970s. The initial membership of 2,500 grew to 20,000 by 1974, with 50 branches. It achieved modest success at a local level. By 1979 the NF lost a lot of its support partly due to its thuggish skinhead image, street violence and Margaret Thatcher’s populist stance on overseas migration.

By 1992 it was eclipsed by the BNP. In 2009 both Nick Griffin and Andrew Brons, one-time chair of the NF, were elected to the European Parliament for the first time. And by 2012 UKIP, although not a fascist party, represented the further mainstreaming of ideas popularised by the BNP.

Nigel Farage, UKIP’s former leader, even boasted in 2014 that he was ‘proud’ the party have taken about a third of the BNP vote.

Britain First and the English Defence League (EDL) became fast growing far-right groups in recent years. Established by Paul Golding and Jayda Fransen, Britain First had an extensive presence on facebook – till it was banned in 2019 along with the EDL and BNP. Its members have targeted mosques and have tried to whip up unrest in predominantly Muslim and Jewish communities.

National Action is another extreme far-right group and was proscribed as a terrorist group by the UK government in 2016. Although small in number the group had a disproportionate reach and influence on social media, using hashtags like  ‘hitlerwasright’. In 2016 it championed far-right terrorist Thomas Mair, who was convicted of murdering MP Jo Cox.

Although racist attitudes and anti-Semitism were prevalent in the latter part of the 20th century, Britain is by and large a tolerant multi-ethnic and cultural society according to author Paul Embery. Of course, there are genuine concerns about migration, which was one factors in the vote for Brexit in 2016.  But research by Hope Not Hate notes we have become more tolerant since 2011. Overt racist views, as measured by opinion surveys, have fallen markedly in the last two decades.

Still, there can be no room for complacency. Keir Starmer has pledged major reforms to eradicate anti-Semitism in the Labour Party, following the recent damning report by the Human Rights and Equality Commission. Yet we must not ignore the real threat from the new far-right which received scant attention.

Since 2009, Newcastle has witnessed a number of far-right protests, led by organisations such as the EDL, Pegida, National Action and North East Infidel, which at their peak attracted 1,500 demonstrators. In Gateshead anti-Semitic hate crime is at a high according to a report by the Community Security Trust. In 2017 hate crime in the Newcastle increased by 68 per cent compared to the previous year, with racial and faith-based offences making up 82 per cent of all hate crimes according to the 2017 Safe Newcastle report.

Half of the North of England referrals to Prevent, the Government’s anti-extremism programme, are for individuals believed to be at the risk of far-right terrorism. UKIP, although a declining political force in the region, has become increasingly ‘racialised’. The fall- out from Brexit could spawn the growth of a new far-right movement.

It’s for these reasons that central government launched its ‘Building A Stronger Britain Together’ programme, part of its counter extremism strategy, to address concerns about the potential growth of political extremism. Tyneside based charity ‘Show Racism the Red Card’ and Newcastle CVS have all succeeded in sharing a £1m pot of money.

As some writers point out, the core lesson from inter-war Britain is that this ‘nativist populism’ only comes alive when government fails to address the anxieties of communities which feel ‘left-behind’. A failure to address industrial decline, wage stagnation and a sense of political alienation could fuel support for a fascist solution through far-right movements or anti-Jewish totalitarian far-left groups in some parts of our divided and fractured post-Brexit region.

Cardiac Arrest: an international rescue in the ‘heart’ of London

Cardiac Arrest: an international rescue in the 'heart' of London