Ben Houchen, the tale of Teesside Airport, and the lexicon of the new right 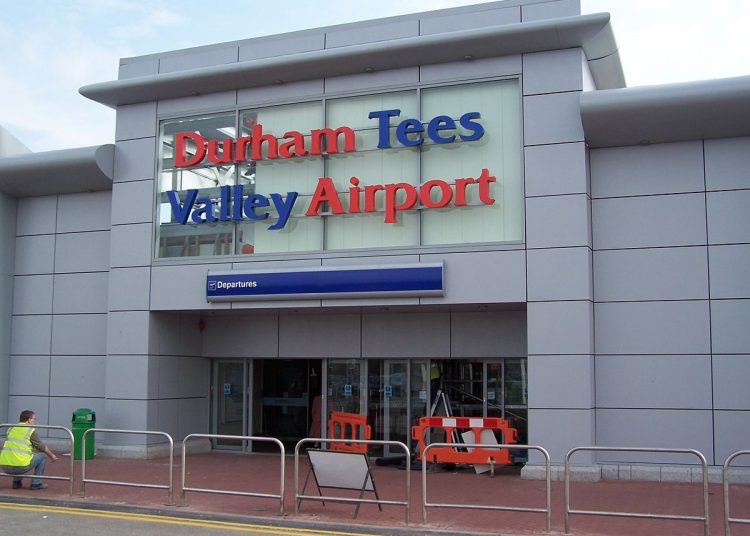 The original uploader was Adambro at English Wikipedia., CC BY 2.5

Ben Houchen’s PR machine has gone into overdrive this weekend, with an article in the Northern Echo, to get the message out to voters that the management of Teesside Airport is a model of transparency, and therefore there is no lack of accountability, and anyone who says otherwise is guilty of “naked politicking and hypocrisy.”

It began when Houchen’s opponent in the mayoral election, Jessie Joe Jacobs, claimed precisely the opposite, and insisted that people had a right to know how their money was being spent and that the organisation should be more transparent.

In November 2020, Tees Valley Monitor (TVM) reported that the Tees Valley Combined Authority (TVCA) had prepared a business plan based on a report by consultants ICF. These observed that only the public sector has the appetite to invest in regional airports. This had been found previously by the consultants to the Welsh government in the run up to its purchase of Cardiff Airport. Both consultancy reports consider that the private owners of these airports (Peel Group in the case of Teesside) were unable to attract investors in commercial markets, and both airports went into decline as a result.

This becomes, in the language of Houchen’s PR team, “For years the Labour Party ran our airport into the ground with Peel”. Put it in other words: Peel Group wanted their business to lose money, and they achieved this with the help of the Labour Party. Or, alternatively, Labour wanted the airport to fail, and Peel Group was happy to oblige. Either way, we are to believe that it was a deliberate act of sabotage. Right.

Later in November TVM reported that one of the differences between Cardiff Airport and Teesside is that Cardiff is 100% publicly owned, while Teesside is 75% in public ownership. This because the airport company at Teesside (TIAL) was set up as a joint venture partnership between TVCA and Stobart Aviation. One side-effect is that the airport company is not subject to freedom of information legislation, as this only applies to companies that are 100% publicly owned. Therefore, the public has no access to information about Teesside International Airport Ltd’s affairs

And the Houchen-PR-speak for this? “There is not a more transparent airport in the country”.  Now, this may seem odd at first, until you work out that Cardiff doesn’t count because, even though it’s 100% in public ownership, it’s in Wales. Fully publicly owned Glasgow Prestwick is also in another country. So that statement is true. The fact that all of England’s airports have exactly the same status with regard to FOI means that the statement “there is not a less transparent airport in the country” is equally true. But Houchen’s PR team omits to mention that.

And there’s the matter of the internal structure of the airport enterprise.

In December, TVA examined how oversight of TIAL is managed from the inside. We noted that, here, as at Cardiff, one company has been set up to manage the airport, and another to hold the shares in that company. In Wales, the holding company scrutinises the work of the airport company on behalf of the Welsh government, and the boards of the two companies are entirely separate.  At Teesside the holding company, Goosepool 2019, can’t do that because it shares directors with TIAL. So, if it scrutinised the work of TIAL, that would amount to marking their own homework.  So, there are scrutiny committees instead.

And In PR-speak? “There is accountability … Reports of the airport come back to councillors who are Labour, Conservative and Independent”.

Now that sounds all right until you consider that a properly functioning holding company has the right to obtain information on demand from the companies whose shares it holds. The members of scrutiny committees at Teesside are entitled only to whatever information Houchen, or TIAL, decides to give them. And some of them have been complaining of the lack of information they receive.  A holding company has the ultimate sanction over the companies it controls in that it has the right to appoint or remove directors. A scrutiny committee has no such sanction within its gift.  So, if they encounter a lack of cooperation all they can do is complain.

Then the PR team gets overexcited.  The article concludes with this:

“My plea to the voters of Teesside, Darlington and Hartlepool is ignore the publicity stunt and look at Labour’s record – a lack of investment and running it into the ground and then look at what we have done over the past four years – secured new flights, overhauled the terminal and created jobs for local people. Don’t put all that hard work at risk.”

It’s as if no one has told the PR team that Houchen was the first elected mayor of the TVCA in 2017 and had no predecessor. Effectively, Labour does not have a ‘record’ in this respect. Houchen, as the first incumbent of the mayoralty, also has a devolved budget to spend on projects in this region that has never existed before.

As for securing new flights, that has certainly happened, and with much fanfare from PR-Houchen when they are introduced, and silence when they are cancelled. When, two days before the ‘transparency’ article, the Northern Echo reported on the cancellation of the Loganair flight to Dublin, one thing that was noticeable by its absence was any statement from PR-Houchen.  Defence of the action was left entirely to spokespeople for TIAL and Loganair.

Few would deny that, even before the onslaught of Covid-19, both TIAL and Loganair were operating in a challenging commercial environment, and setbacks were inevitable, but the public might expect some defence of that from the elected mayor who, more any other individual, has been the face of the airport project. That would demonstrate a sense of responsibility.  However, PR has no sense of responsibility towards the electorate. It is there to advertise a product, and the product in this case is Houchen. So, where transparency should be, there is only manipulation.