Young European Movement launched its exciting new Beyond 2022 campaign this week. The young people share a passion for European unity. 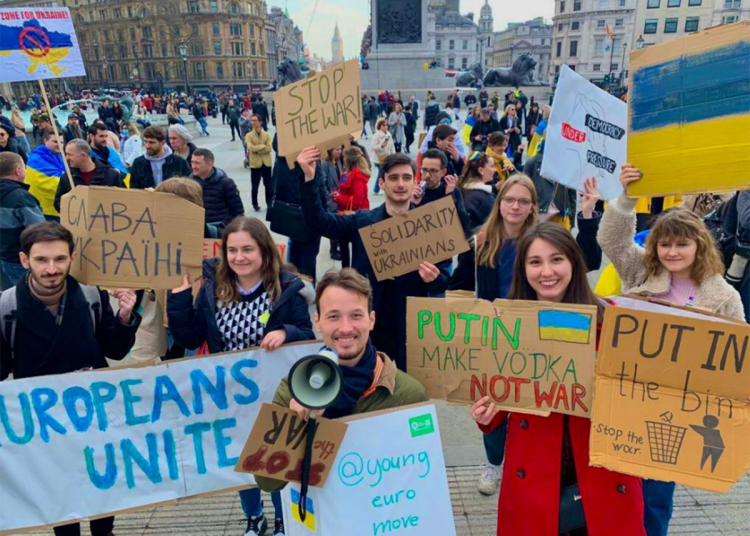 Young European Movement (YEM) UK launched its Beyond 2022 campaign this week at Europe House, London with a book presentation and panel discussion. Titled after the new book of panellist Yannis Karamatsios (writer and legal officer) – ‘Time for a European Federation’ (Peter Lang) – the event kicked-off a weekend of workshops, discussions and activities, all with the aim of engaging young people in a vital conversation: what is the future of Europe?

Beyond 2022 is bringing the pro-EU conversation to UK youth through mobilising – and creating opportunities for – young people to talk about Britain’s future now we have left the EU. Where the EU has made 2022 the European Year of Youth and is launching citizen consultations all over the continent in the framework of the Conference on the Future of Europe, young people need more ways into politics and Beyond 2022 will help UK youth to be heard.

After an interactive workshop hosted by The3Million on migrant rights in the UK, young participants collaboratively produced a letter on their personal voting rights as EU nationals with UK citizenship regarding the Elections Bill, which will be pitched to the House of Lords. This was followed by a talk from Typhaine Morillon (European Parliament, EU Delegation to the UK) on the activities of the EU Delegation to the UK, before the panel discussion brought together young pro-European activists from across the UK in order to debate Yannis’ vision for a federal Europe and argue for their alternative visions for the continent.

“The economic decline compared to the rest of the world”, Karamatsios argued, is Europe’s main issue, “along with demographic stagnation, food dependency, energy dependency and staying behind in the race of the fourth industrial revolutions”. Karamatsios then argued for a federal Europe, rooted on policies such as a universal basic income of 300 euros a month for every citizen, as well as a quota of two million immigrants every year. During the discussion, young people debated their views on a common foreign policy, an EU army, the fiscal union, immigration and refugee policy were amongst the topics discussed.

On the event, Typhaine Morillon of the EU Delegation to the UK said:

“The EPLO in the UK was delighted to hold this live – and lively – event together with YEM, to celebrate both the European Year of Youth, and the continuation of our long-standing partnership, and in particular our discussions around the Conference on the Future of Europe. Judging from the quality and intensity of the exchanges, and the smiles on the faces, this will lead to an even closer cooperation, to make sure young voices in Europe are heard and represented”.

“YEM’s Beyond 22 programme included an intense and lively discussion on a federal Europe during which a wide range of views were hotly debated. Nonetheless all delegates shared a passion for the closest relations to be re-established between the U.K. and the EU. YEM deserves to grow into a major campaigning organisation”.

Following Friday’s event, Beyond 2022 continued at Bush House (King’s College London) the next morning with a workshop on citizen journalism from Bylines Network. This flowed into a policy forum, in which participants were encouraged to voice their views on UK-EU relations on the key tenets of the UK’s Brexit Deal (such as trade, services & qualifications, travel, fishing, European Court of Justice & Other Disputes, security & data, and education).

As such, for the first time since before the pandemic, YEM was able to bring young people from all over the UK together – face-to-face – in order to look into the effects of the Trade and Cooperation Agreement (“Brexit Deal”) and to discuss what the next steps could look like to a better and closer relationship between the UK and the EU.

We need young people on board

“Beyond 22 is proof that young people in this country are not willing to accept the status quo as is and are keen on improvements in the EU – UK relations. We need them on board with us, and we do!”

On the last day of the event, young speakers from the Young Greens, Young Liberals and The3Million debated the importance of proportional representation (PR) on an in-depth panel discussion hosted by Make Votes Matter. The weekend then closed with a march from Bush House to Trafalgar Square for the opening action for YEM’s Democracy under Pressure (DuP) campaign, where participants stood in solidarity with Ukraine against the Russian invasion.

YEM UK is the youth wing of the European Movement UK and UK Section of JEF Europe. The organisation carries out activism for pro-European campaigns and advocates for policies to make Europe stronger, greener and more democratic; all with the aim of empowering young people to engage in politics.

Teesside Tommo’s tax and spend turmoil: what will the new Red Wall voters do?