The final part of Chris Humble and Brendan McBear's pilgrimage through Middle England. In this article they have arrived in Scotland! 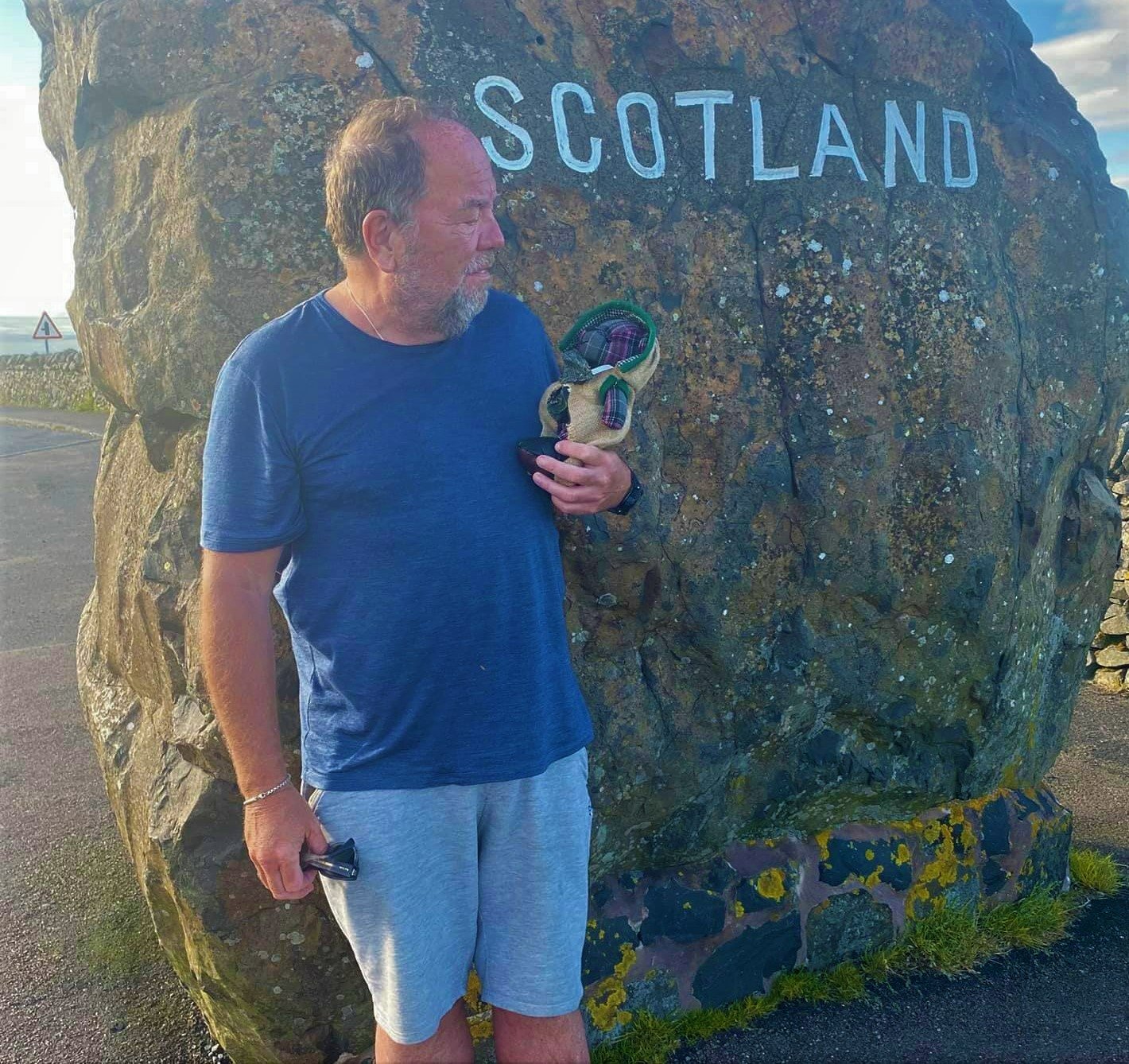 Those of you with long memories may recall that in the first part of this series, I explained how the original inspiration for the pilgrimage had come whilst walking the Pennine Way with my late friend Antony.

As I pondered the best way to approach the England/Scotland border at Carter Bar, from Bellingham, I realised that it was the 20th anniversary of that trip. It therefore seemed fitting that the penultimate leg of the Pennine Way was basically the only option for us now. 16 miles across wild moorland, where, for so much of the time, you feel like you’re walking on top of the world. It’s a lonely place and lends itself to reflection and introspection. I’m unashamed to say that memories led to tears being shed, but also to laugh out loud moments, as we traversed that peaceful, bleak, wilderness.

“To be sure, i thought the Big Eejit had finally lost it, muttering away, blubbering and guffawing.”

Thanks for your compassionate empathy Brendan.

We spent the night in a B&B in Byrness, five miles from the border. There was really no way to cover those last few miles on foot the next day, short of walking along the busy road, so my friend Karen kindly drove up from Newcastle and took us up in her car, with a promise to take us home to Newcastle afterwards.

This invoked memories for her, from her childhood in Byrness village. Brendan and I made sure to hop out of the car just before we reached the border; Karen parked up and walked back to join us. We now had to walk along the English side of the border until we reached the exact central ‘Middle England’ point and the end of our journey.

I had not paid much attention in advance to this final section. A brief glance at the map had suggested to me that it was about half a mile. In reality it was more than two miles, steeply uphill, on uneven, boggy, heathery ground. Karen grumbled a bit, not unreasonably, given that she was only wearing Converse trainers and expecting a casual ten minute stroll!

The northernmost point of Middle England

She had been delayed in travelling up from Newcastle, and our arduous climb meant it was gone 6pm when we finally arrived at the northernmost point of ‘Middle England’, interestingly situated on the highest terrain for miles around.

At exactly the moment we got to the precise spot, my phone pinged with a reminder. A very poignant reminder. It was ten years, to the minute, since my father had died. Karen and I (and possibly even Brendan) were stunned by the timing.

I had noted, the day before, that it would be the anniversary, but had expected to be back in Newcastle by late afternoon, and perhaps able to visit Dad’s grave as I’ve regularly done at this date and time. But it had completely gone out of my head on the day itself, with everything else that was going on. Karen and I agreed to take some time out. I stared towards Scottish mountains and contemplated life, love and loss. Karen faced the other way to Northumbrian hills and remembered her own parents and how much they had loved this area.

The pilgrimage was done

‘Middle England’. We’d done it. The journey was over. The pilgrimage done. What had we learned about our country?

I had observed a strong sense of relief. A sense of people slowly but confidently emerging from shells they had contained themselves in for well over a year. Perhaps also an element of contentment that had not been so prevalent before.

I met so many different people. I think I blessed some. I know that many blessed me.

There were few negatives, but these included footpaths mindlessly closed by developers, and, of course, the bloody British weather! Positives included the kindness that is so often shown by strangers, and the fact that public transport in this country is overwhelmingly excellent.

I think Brendan enjoyed himself…

And so we leave you for now, but look forward to taking you on our next journey. I believe there are still some islands that need visiting…

It’s tonight! A fun and fabulous neon playground at Independent