Boris Johnson set to be downgraded at the next election

Democracy is not democracy if the electorate does not have a chance to change its mind. I and many others were denied the opportunity to vote in the 2016 referendum simply because of our age. 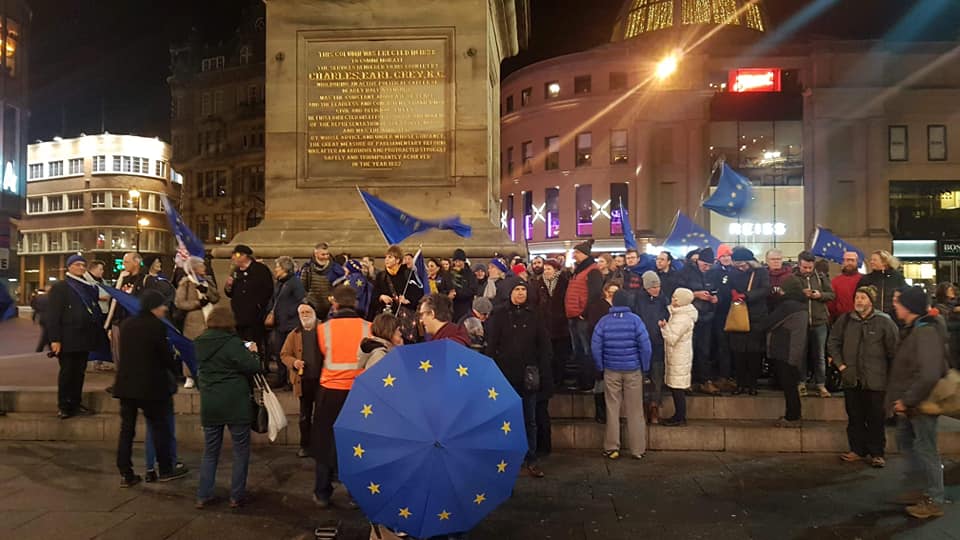 Grey's Monument silent vigil for the loss of rights and freedoms the Government has inflicted on us. Photo by North East Bylines

Standing at Grey’s Monument, Newcastle, on the 31st January 2020 at 11pm, I could not have guessed that a few months down the line we would be in the midst of a global pandemic. I would have also looked in utter disbelief if someone had told me that my mock exams could potentially become my final A-Level grades. As some of us marked the occasion of the UK leaving the European Union that night, the future looked bleak. And then Covid-19 was thrown into the mix.

Democracy is not democracy if the electorate does not have a chance to change its mind. I and many others were denied the opportunity to vote in the 2016 referendum simply because of our age. Surely there should have been a possibility to check that Brexit was really what we wanted as a country and surely young people should have been consulted?

I am already seeing the negatives of leaving the EU, such as the end of the ERASMUS scheme. This is going to make the option of studying abroad only available to the privileged few.

If I were to grade Boris Johnson’s handling of the exam fiasco, I would have to give him a U. The total lack of trust that the government displayed towards our teachers is shameful and they should have never altered their original predicted grades. Teachers already suffer enough, with ever-growing classroom sizes and poor wages but now they are having to endure a demoralising absence of faith from the Prime Minister.

As Secretary of State for Education, Gavin Williamson, along with his counterpart in Scotland, John Swinney, should face the sack for the hardship they have caused young people across the United Kingdom. So many students were apprehensive enough as it was to receive their grades, but to open that envelope and see they have been cut merely because of their postcode is a difficult feeling to try and fathom.

These days, the Government’s policy changes back and forth like the bounce of a ping pong ball and yet we have ministers cowering away to avoid scrutiny. To this day, we still have not heard a formal, sit-down apology from Boris Johnson over the exam fiasco. We have Matt Hancock abolishing Public Health England (PHE) for its ‘failure’ during this pandemic, despite it being an executive agency of the department he heads. And finally, there is Gavin Williamson clinging on as Secretary of State for Education, even though half of my Sixth Form could do a better job than him.

The Prime Minister had his night on the 31st January, but he must never forget that everyone who received grades this summer including those who stood at Grey’s Monument that night, will be old enough to vote in 2024.

Government A-Level debacle symptom of incoherent approach to data, and the opportunity this presents the North East