This government's war is actually against people in dinghies 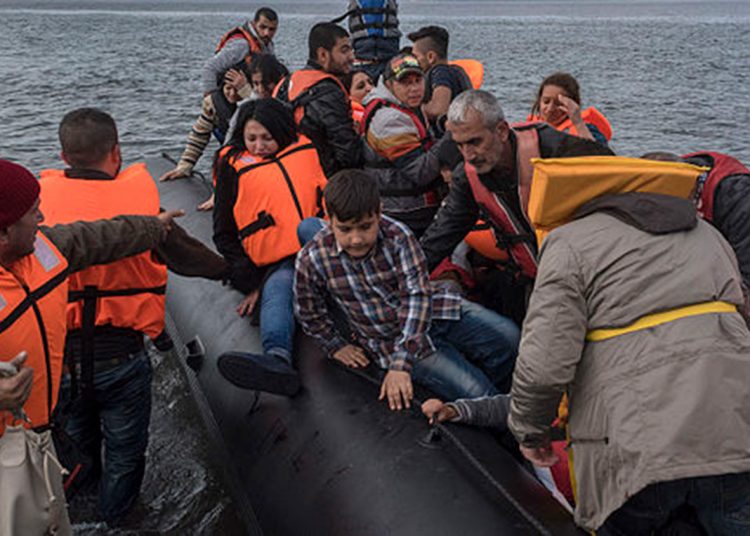 Forget ‘send them back’! “PM invoked spirit of Brexit” hailed the Daily Mail reporting Johnson’s confirmation that the desperate plight of the refugees crossing the Channel in dinghies would be solved first by sending in the frigates, and then, failing that, by deporting them to Rwanda. That’s right, we’re going to send them to some other Hell entirely, thousands of miles from here, there, anywhere.

But it’s not about racism, no. In a speech in Kent, he underlined the old mantra that it wasn’t about the ‘Forrin’ invading Farage’s garden, but to end this “human suffering and tragedy”. How, Johnson, how? By “disrupt[ing] the business model of the gangs” in a ‘world-first’ deal, or “economic development partnership” as Johnson properly called it, with Paul Kagame’s regime.

Business, deal, economic partnership. The solution to the hideous and complex plight of desperate humanity fleeing wars often enabled by British bombs is by putting the people traffickers out of business. How free market, how Conservative, to frame such suffering as a business problem. One wonders where and when was this interior ministry expo, where UK Home Office ministers were so successfully schmoozed by Rwanda’s ‘Migrant Solutions’ stall, but we digress.

The theory is these service providers (traffickers, smugglers) will go bust when the viral marketing disabuses their customer base (refugees) of the UK offering sanctuary and liberty, as so much imperial soft power selling led them to believe, but instead offers only relentless Hell in Rwanda. Truly, “f*** business”, Boris Johnson. But the traffickers are entrepreneurs; they may likely just switch trade into cigarettes, diesel as that gets such a premium in the UK now, or delicate laces, the kind of post-Brexit smuggling so romantically envisaged by Charles Moore. The real point is this, though, it’s a business strategy involving deporting desperate human beings, and retroactively doing so on the false claim of having come ‘illegally’, to uncertain fates thousands of miles away, and by that terrorising tens of thousands more lost souls into realising they have no hope here.

Certainly, none there. The UK government will bear no responsibility for anyone’s fate in far-flung, sovereign Rwanda, as if we’d ever find out. Now the country’s not massively corrupt in global rankings, certainly not compared with the country of origin for so many donations to the Conservative Party, but the regime of the Rwandan Patriotic Front, topped by Kagame, is markedly authoritarian, oppressive, brutal, in a country that underwent a mostly unpunished genocide a mere generation ago.

A genocide that, as Ranulph Fiennes puts forth in his book My Heroes, was largely brought about by the ruling Hutu elite’s media conducting a drip-drip-drip poisoning of the minds of the Hutu masses against the middle-class, and unsuspecting Tutsi, a stoking of ethnic tensions over decades until the day the trap was sprung and the slaughter began …

Today’s Rwanda is where the regime’s opponents, critics, journalists investigating abuses and massacres ongoing are threatened, incarcerated, murdered, disappeared, under a state that the international NGO Human Rights Watch has noted for “arbitrary detention, ill-treatment, and torture in official and unofficial detention facilities”. Surely such places that the UK’s great unwanted will end up, at the great expense of the heavily indebted British taxpayer: because spending our pounds on murderous Russia’s oil is bad, but propping up Rwanda’s murderers is good.

Either way, they ain’t coming back: “Asylum seekers will get NO right to return”, hailed the Mail. Any hopes they might inveigle their way into neighbouring Uganda and come back as economic migrants, like Priti Patel’s parents, who weren’t refugees, will have shrivelled up, too. One might fancy their chances more if they were lighter skinned, like those nice Ukrainians who the current government claim to be welcoming in with open arms, so long as they can provide the UK’s pop-up, fold-up, visa-processing sites with utility bills, bank statements and employer referees from their homes in bombed out Ukraine.

The war in Ukraine, to where Johnson most recently fled for a photo-op, standing in the bloodied rubble and basking in Zelenskyy’s limelight, then coming back here where he ‘braces for battle’ over the Rwanda deal, hailed the Mail.

And this is it. The party whose MPs have received staggering amounts in donations from Russian oligarchs, the party of the Brexit that Putin sought and did so much to enable, the party whose leader will go to Kyiv just for a photo-op with the leader of a country incurring mass murder and rape from Russia … their actual war is against people in dinghies. It’s against them that the great colossus of Global Britain now unleashed will send its Royal Navy – and only a few miles offshore too, saving a few bob on fuel. Brexit Britain, open for business, leading the world, unencumbered by the red tape of principles, its own values, of justice, truth, humanity.