Who knew that a tariff-free deal could carry so many extra costs? 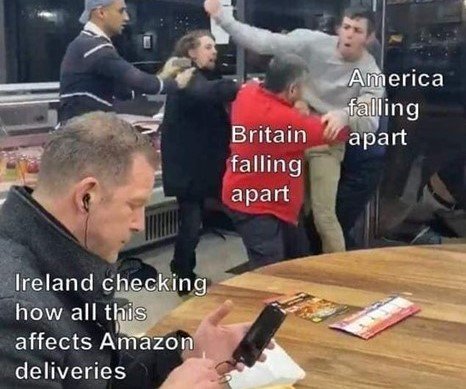 There is some truth in this meme, or course. The situation in America may be improving since it was first circulated, but Britain is still in the middle of a serious existential crisis – Who are we? Why are we here? What do we want in life? Ireland is still trying to work out how it is affected by other people’s dilemmas – a Brexit that the people of Ireland were unable to vote for is now causing huge changes to the way life works here.

Despite Amazon having a massive presence here in terms of offices, there has never been an Amazon.ie. Irish people set up their accounts with Amazon.uk and an Irish address. My experience of this has been that the website strings you along until you get to the point where your order is confirmed, then tells you “Sorry, we do not deliver to your location, please try a different delivery address”.

I’m guessing Amazon will be thinking hard about starting up an Irish website and sourcing products from places other than the UK. We heard rumours in late December that they have been searching for warehouse space in Dublin. In the meantime, we’ve been advised that the best thing to do is to open an account with Amazon.de, which has an English language option. There is of course no reason why a product made in China for a Dutch company should have to go anywhere near the UK, but like so many companies that have hitherto treated the UK and Ireland as a single entity for trade purposes, Amazon seems not to have thought this through – yet.

One area where Ireland has been doing rather better, though, is shipping. Irish Ferries, Stena, and Brittany ferries are all in the process of strengthening their routes between Ireland and France, at the expense of the customs-ridden routes to the UK.

Long before Brexit actually happened, the port of Rosslare, in County Wexford, was upgrading its cargo facilities. Multiple direct routes to France have been established from both Rosslare and Dublin to Roscoff, Cherbourg, and Dunkirk. Stena Lines is particularly proud of the new Stena Embla, which, as recently as January 4th was destined for the Belfast / Birkenhead route. It has now been redeployed to work the newly popular Rosslare to Cherbourg crossing. This direct route to France apparently takes about eighteen hours; commentators have been worried about the cost of having a driver languishing in his cabin for most of that time, but there is a cunning plan.

On some of these ferries, drivers are parking their trailers, unhitching the cabs and driving off, leaving their cargos to sail alone. The trailers are then picked up by local cabs at the far end. This is an ingenious way to make a ro-ro ferry operate as closely as possible to a container ship and it seems to be working, although I wouldn’t like to be the ferry manager who has to choreograph the loading and unloading. There are now a dozen ferries on this route, and the Embla alone can hold 3km of trucks.

“Oh mom (sic) dieu look at that absolute unit. Packed up to the very gills with freight arriving back from Cherbourg. Ireland we’ve got this” tweeted the excitable social media manager for Stena Line Group. I guess we have found the one tangible benefit of Brexit – fewer HGVs on English roads, using what they dismissively call the “UK Land-bridge”. Good news for anyone who regularly uses the M4.

Of course, not all the changes for Ireland are trade-related, and not all are negative. I remember being told, back in the 1980s, that one of the jobs the UK was expected to do diplomatically, was to be the spokesman for the EU in the United States, and vice versa. Having a shared history – albeit a colonial one – and a shared language, put the UK in the ideal position for some powerful shuttle diplomacy.

However, it was surprising to hear Keir Starmer, at a Fabian Society speech last weekend, still saying “Britain’s national interest lies in being the bridge between the US and Europe.” I have news for him. The EU and USA do not need a “bridge” that isn’t part of either territory. As the only English-speaking country in the EU, Ireland will be picking up that role. This is especially true with a very Irish-American US President, who is closely allied with Ireland already. Joe Biden has ancestry on his mother’s side in Ballina, County Mayo. (On his father’s side, the Bidens came from somewhere near Chichester, West Sussex, but that does not seem to have registered with the new President.)

Here in Ireland, the political commentators are saying that Biden has already appointed more cabinet members from the West of Ireland than the Taoiseach has. They are mainly referring to Marty Walsh, the Irish-speaking Mayor of Boston, who will become Biden’s new Labour Secretary.

On the whole, everybody loves the Irish – genial, neutral, formerly much put upon by a belligerent colonial power, English-speaking and fond of the craic; Ireland may only be one percent of the EU population but is gaining in soft power, thanks to the UK’s ignominious decline.

Homemade vegetarian lasagne recipe – a good one for fussy eaters!

Homemade vegetarian lasagne recipe - a good one for fussy eaters!