I don’t feel responsible for what happened long before I was born. 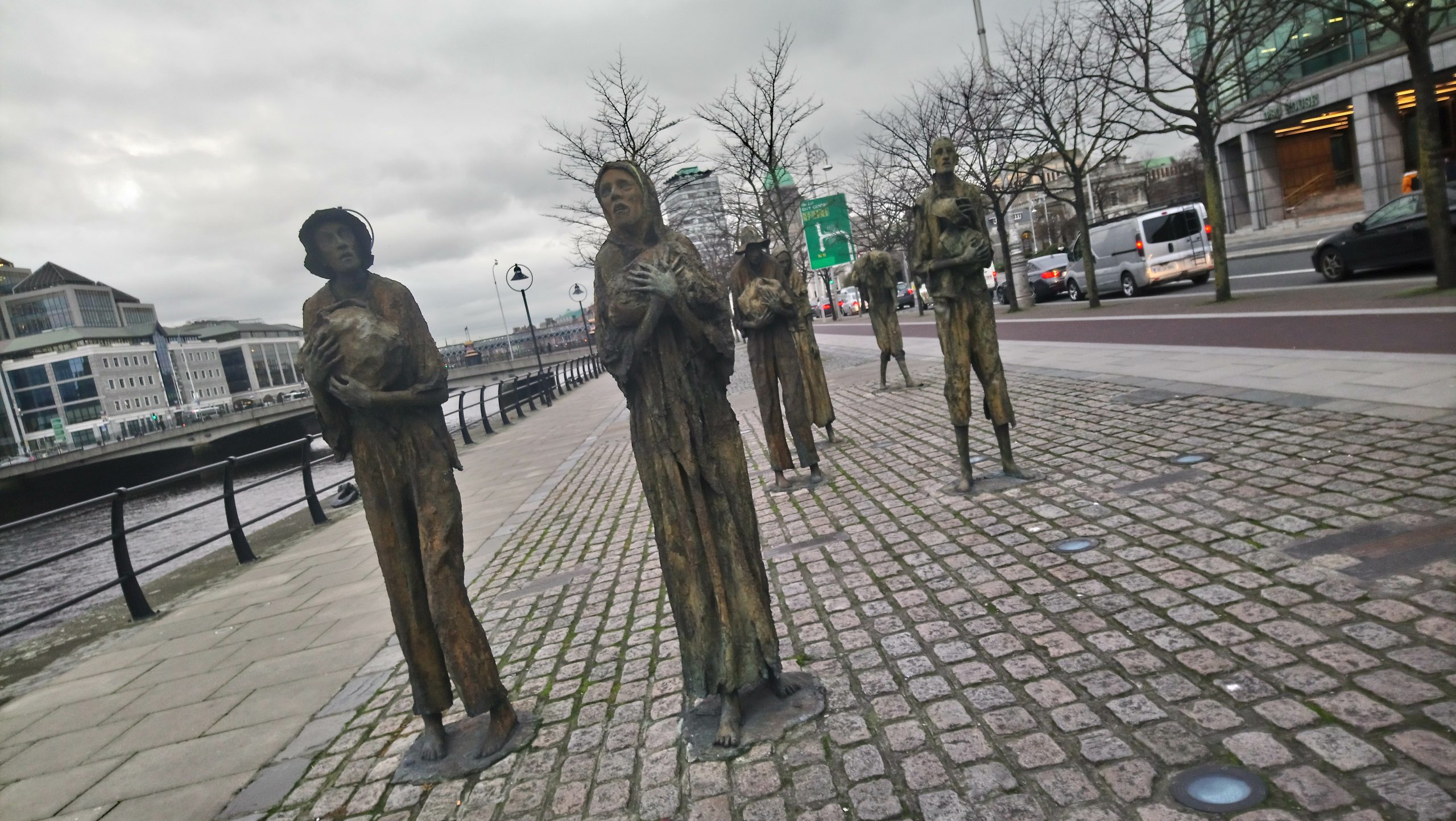 It was 2003 and the whole of Europe was basking in a record-breaking heatwave – apart from the West of Ireland, where we were wearing jeans, boots and fleeces, emptying out the dehumidifier in our holiday cottage twice a day and getting used to the mournful aroma of a turf fire. One evening we went to Doolin, a coastal town famous for its traditional Irish music, and we stumbled on a fantastic session in one of the local pubs. As we were leaving, a local fella in a flat cap and wellies approached many of the audience asking them where they were from. “Australia” said some, “Netherlands” said others, “Spain”, “the USA”. He shook hands with all of them and told them they were welcome.  But when he asked us and we said we were British, he turned his back without a word and walked away. Such is the reputation of the British in Ireland.

Arriving to live in Ireland in 2020, I’m aware that the country is about to spend a whole year commemorating the horrible things the British did a hundred years ago. In September we had the anniversary of the Sack of Balbriggan – a town just a few miles up the coast from here, where British Black & Tans torched fifty buildings and killed two men in reprisal for a couple of squaddies being shot after a row in a bar. Last weekend was the centenary of the original Bloody Sunday, when the IRA shot a number of British soldiers in their own Dublin homes on a Sunday morning, accusing them of being spies. The army’s response was to block all the exits to the Croke Park stadium during a Gaelic Football match that same afternoon, with the intention of searching the crowd, on its way out, to find the gunmen. Only, ten minutes into the match, shots were fired, and the result was a stampede for the exits and a bloodbath in which a number of the crowd were killed, including boys aged ten and fourteen, and a young woman who was due to be married the following Saturday. It is going to be brought home to us over and over again in the next twelve months, that the British, as an occupying power, were poorly organised, ill-disciplined, bad strategists, and brutal. They were also fond of cover-ups. Until very recently, it was maintained that the first shots at Croke Park were fired by IRA gunmen inside the ground. Newly-released documents imply that, in fact. all the shots came from the British forces.

Further back in the history of the British in Ireland, things were no better. Eyewitness accounts of the potato famine give some idea of how devastating the potato blight was for an already impoverished population, and how, during this time, Irish-grown food continued to be exported, being too expensive for the ordinary Irish family to afford. But the British remained blasé.

Rotten potatoes and sea-weed, or even grass, properly mixed, afforded a very wholesome and nutritious food. All knew that Irishmen could live upon anything and there was plenty grass in the field though the potato crop should fail. (The Duke Of Cambridge, January 1846)

I don’t feel responsible for what happened long before I was born. At the time of the Great Hunger, my ancestors were living lives of rural poverty as farm labourers in Scotland and England. None of them would have been able to vote for the British government that despised the Catholic Irish and conspired to keep them in poverty. I don’t feel responsible, but as an Englishwoman in Ireland, I have to be sensitive to the difficult history of our two countries. As last summer’s Black Lives Matter protests indicated, we Brits have a lot to learn about our country’s history of colonial rule.

Now I am English living in Ireland, I feel quite apologetic for the latest chapter of British imposition on Ireland – Brexit. Without being able to vote on it, Irish people are being made to suffer the consequences of Britain’s inability to get on with its neighbours. After the United States, the UK is the second biggest destination for Irish exports, and the biggest single source of imported goods. Many commercial operations conflate the two countries, for example, there is no separate Amazon website for Ireland; we order goods from the UK site and put up with the extravagant shipping costs and delivery times. When my Bosch washing machine breaks down, I call an Irish number, but I’m put in touch with a British call centre to book a repair. It is still not clear how any of this will operate after December 31st. Will there be tariffs to pay on goods ordered from the UK? Will Irish beef and butter still appear in UK shops? Irish lorries have been used to making the journey by ferry to the UK, crossing the UK motorway network, and taking a second ferry to France. These extra transport costs explain the high cost of living in Ireland, but will such journeys even be possible in the new regime? And what effect will customs delays at Dover have on Irish shops? Suffice it to say, a number of new ferry routes have started up between Ireland and France and the Netherlands, to try to minimise these interactions with the UK. And last, but far from least, we still don’t know the effect of Brexit on the Irish border, and the uneasy peace between Northern Irish people who, thanks to the Good Friday Agreement, can choose to be British, Irish, or both.

When I meet Irish people, I roll my eyes and shrug my shoulders and tell them I am sorry my country has gone feral. They are generally really nice about it. They usually mention their relatives in England who love living there and say they’d never come back, or the great years they spent working in London. They are kindly reminding me that there is a long shared history between our two countries, a fact that the Queen acknowledged on her historic visit to Dublin in 2011, when she wore green, and made her opening remarks at a formal after-dinner speech in Irish. About six million people in the UK are of Irish heritage, 400,000 of those having been born in the Republic. Conversely, the British are the biggest minority in Ireland, at about 100,000, or two percent of the population.

It seems to me that Britain is still acting like the Black & Tans. Still throwing its weight around, still believing it has a right to be in charge, and still having an instinct for vengeance and reprisal. Still being poorly organised, ill-disciplined, bad strategists, and brutal.

The pandemic of violence and what to do about it

The government needs to do more to save the High Street: a response to the Arcadia group administration news

The government needs to do more to save the High Street: a response to the Arcadia group administration news