"The Tories failed our steel workers before, they can't be allowed to fail them again" 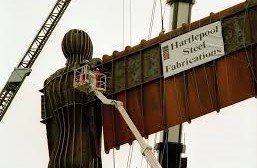 Constructing the Angel of the North Photo by Sally Anne Norman, used with permission

Hartlepool’s history is forged in steel. Sadly, the town’s steelworks closed in 1977 with a loss of 1,500 jobs and the end of steelmaking in the town, leaving local steel fabrication workshops to create structures from steel made elsewhere.

The main fabrication work was focused on mass production of large diameter steel pipes, but Hartlepool steelworkers in 1998 were to make a lasting contribution to the identity of the North-East with the creation of Anthony Gormley’s iconic ‘Angel of the North’. Again sadly, and shortly after the triumphant rise of the Angel, Hartlepool Steel Fabrications saw itself fall into insolvency.

Formed through the merger of British Steel and Koninklijke Hoogovens, Corus inherited the Hartlepool factories in 1999, and they were transferred again in 2007 as part of the Tata Steel takeover. Ten years later (2017) Tata Steel UK sold its 42-inch and 84-inch pipe mills in Hartlepool to Liberty House Group, and retained it’s 20-inch pipe mill on the same site.

Liberty House Group was founded almost 30 years ago by industrialist Sanjeev Gupta; its 2017 Hartlepool acquisition was made together with the acquisition of Tata Steel Speciality Steels businesses over the rest of the UK. In total they employ a UK workforce of some 5,500 people spread across more than 30 sites, making it one of Britain’s largest industrial employers. News of the takeover came only days after the announcement of a deal for the group of which Liberty was part, to acquire Australia’s mining and steel business, Arrium Group, also employing a total of over 5,500 people.

Liberty House set its sights on forging a key role in the global oil and gas pipeline sector.  It seemed to be making headway towards achieving this in May 2020 when it announced  it had ‘by some way the largest order since the business was taken over by Liberty House Group in 2017’. The contract for more than 290 miles of steel pipes provided the business with its strongest backlog of orders for more than six years. It was therefore a shock to read on 8 March 2021 that there were fears over the future of Liberty Steel as a result of the collapse of its main supplier of credit, Greensill Capital.

As explained by the Greensill Capital website, before it was taken down and replaced by a notice of the appointment of Joint Administrators, ‘Our passion was born out of personal experience. Founder and Chief Executive Lex Greensill saw first-hand the devastating impact inefficient financial supply chains can have on a business as he grew up on his parents’ sugar cane farm in Australia.’ Founded less than 10 years ago, this passion involved lending money to businesses to pay their suppliers – a sort of corporate “Pay Day Loan Company”. The website also explained that they bought company invoices, packaged them and sold them as bonds. Is that not what finance companies exploited with home mortgages in the United States, and which contributed in no small way to the 2008 financial crash?

It seems that Greensill and Liberty House had each other by the throat and stepping back from the apparently $5bn of Greensill’s exposure to Gupta’s GFG Alliance group of companies, which includes Liberty Steel, could lead to the collapse of both parties to the loans.  Greensill Lawyers claimed that GFG was “currently experiencing financial difficulties” and had “started to default” on its obligations. It had apparently been worries about these liabilities that caused Greensill’s main insurer to refuse to renew a $4.6bn contract and Credit Suisse to freeze $10bn of funds linked to the firm.

Despite the failure of Greensill, in his address to union representatives on Tuesday, Gupta said: “We have adequate funding for our current needs while we bridge the gap to refinancing the business”. He said the GFG Alliance as a whole was “operationally strong”, but noted ominously “There are some exceptions and I’m sorry to say that includes some of our UK steel businesses.” Demand for some products had fallen as much as 60% during the pandemic following “the severe downturn in the aerospace sector due to Covid-19”.

The dramatic emergence of the risk of termination of thousands of Liberty Steel jobs across the UK has caused dismay in many quarters. Labour’s Tees Valley mayoral candidate Jessie Joe Jacobs has demanded swift and decisive government action to save steel jobs under threat in Hartlepool to prevent a repeat of the Redcar steel collapse in 2015:

“The Tories failed our steel workers before, they can’t be allowed to fail them again”

This time, if the worst were to happen it may be difficult for the Tory Government to blame European Union rules for inaction as they mischievously and wrongly did in 2015. After all, until a few days ago, former prime minister David Cameron was a senior adviser to Greensill, and former Government chief commercial officer Bill Crothers was its vice-chairman.

2020 started badly for Hartlepool with the final closure of the Heerema Fabrication Yard in January 2020. Let’s hope that in 2021 Hartlepool stays at the top of the barrel and its share of steel fabrication at the Liberty Steel Pipe Mills is not allowed to evaporate.