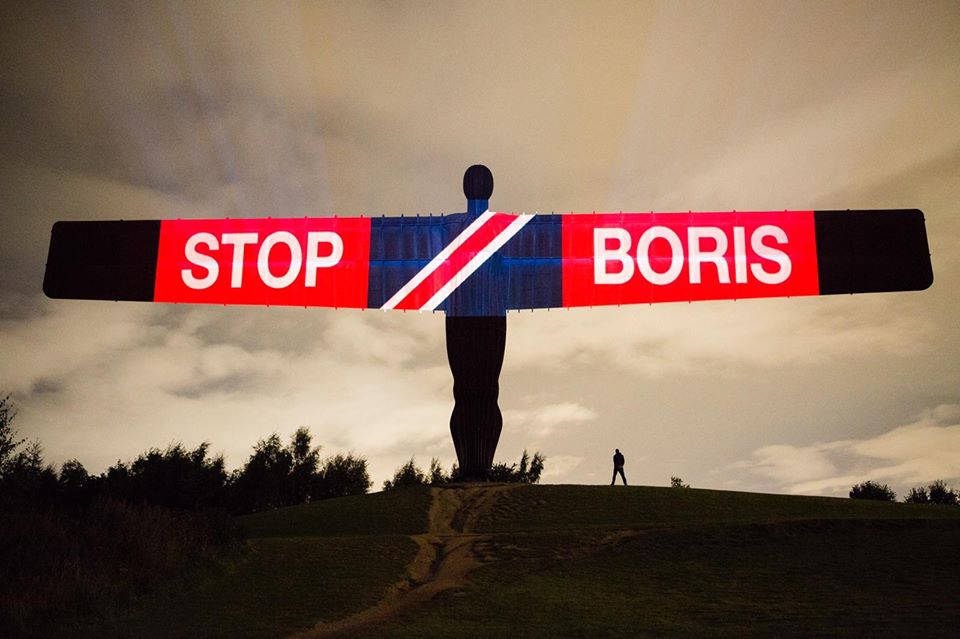 Angel of the North saying Stop Boris screenshot from facebook

On 20 January Joseph Robinette Biden Jr was sworn in as the 46th President of the United States of America and the planet heaved a sigh of relief.  The question we are now asking is: if the Democrats could unseat Trump, can we defeat the Tories who, like Trump, have the billionaire money, the media muscle, and a way with the truth that lowers the standards bar to the floor?

The short answer is no. Not with a bog-standard General Election campaign that we’ll begin to think about in 2024.

But there is a way. The Republicans weren’t just beaten by a superior presidential election campaign,  but with a four-year grassroots fight to weaken their authority and prevent the Trump agenda from becoming law.  With some adjustments we can copy their game plan.

The rallying call to the American ‘Resistance’ was the 25-page Indivisible Guide, written after the Trump victory by congressional staffers Ezra Levin and Leah Greenberg. Born as a Google Doc, by its first birthday the Guide had received six million views,  6,000 groups had popped up nationwide and 500,000 actions had been taken.

Their efforts laid the groundwork for the 2018 mid-terms, when all seats in the House of Representatives and one third of the Senate were up for election. The House of Representatives saw a Democrat landslide. The Senate results, always weighted in favour of the Grand Ol’ Party, were better than expected. The movement energised the election campaign that installed Biden.

The Guide had two unusual features. First, it borrowed from the Tea Party Movement, a network of right-wing groups that sprang up after the election of Barack Obama in 2008.

Named after the Boston anti-tax protest of 1773, the Tea Party realised that with minimal but highly focused action, local groups could dissuade even Democrat lawmakers from backing Obama’s ‘mandate for change’ and at the same time sabotage their reputations in their home districts.

The Tea Party ensured the Republican congressional Mid-term gains of 2010 that paved the way for Trump in 2016.

Greenberg and Levin witnessed the policy vision of the Obama presidency evaporate in a right-wing Congress. The tactics they observed became the basis of the Indivisible Guide:  it was a Republican strategy for Democrats.

The Guide’s second surprising quality was its totally defensive stance. It was all about protest – to obstruct new laws and protect the Obama legacy. It was not about lobbying for a social justice programme. That didn’t mean that activists couldn’t promote their own agenda in other ways too. But Indivisible’s only objective was negative publicity.

The advantage of this tactic for us Brits is that a group only has to agree on two aims – the removal of its sitting Conservative MP and opposition to government legislation.  With our plethora of parties and factions, it avoids wasting time fighting over a mini manifesto.

The Guide homed in on the lawmakers’ weakness: they live for re-election. They are terrified of a bad press and local unpopularity. Indivisible challenged Republican politicians using the local media and the democratic process. Groups were encouraged to write to their lawmaker with simple questions, run phone bank protests and hold demonstrations at their district offices. The US tradition of Town Hall Meetings hosted by the local congressman proved a great venue for action. Every event was recorded and followed up with publicity.

So can we use the same approach here? Yes, with a few tweaks. We are unlikely to persuade a Conservative MP to vote against their own government: our American cousins are strangers to the Three Line Whip. The best we can hope for is public criticism of the laws being passed.

One group just has to target one person –  their local Tory MP. Our unelected Peers of the Upper House are immune to our charms.

If your representative is a ‘friendly’, there’s no point in lobbying a nearby Tory –  MPs are only allowed to deal with their own constituents. Instead ask your MP for support by raising questions and using parliament to press your case.

First form a group, if you’re not in one already. The MP has more to fear from a group than an individual.  You can set up a facebook page to attract members,  all you need is half a dozen people and you’re good to go. The plan is based on surgical precision, not large-scale actions. The work shouldn’t take more than an hour a month per person.

Next find your MP – easy enough to do with a simple google search. On the Parliament website you can find their voting history, committees, speeches, expenses, and financial interests. Their election donors are listed at the Electoral Commission. Their posts as company directors are filed with Companies House. You’re looking for conflicts of interest and favours for donations. You will definitely find that their speeches and votes don’t chime with their squeaky-clean image as presented at election time.

Then the press. Make a list of local newspapers (they all have websites now) plus radio, TV and blogs. The local media has very little money but it’s hungry for reliable content and MPs follow the local news closely. Don’t forget the nationals and independents  –  they might pick up a newsworthy story.

Learn the fine art of writing a press release. This will take 20 minutes. On timing the release, a senior local reporter advises, “I don’t think it really matters, nowadays everything is web-based, so perhaps send the email first and follow up with a phone call to remind them you sent it”.

Take a simple question, perhaps on a scandal like PPE contracts going to cronies.  Or on new legislation – for instance the Electoral Integrity Bill to be debated in the spring which will require voters to show photo ID – disenfranchising poorer people without passports or driving licences.

Write your MP a personal letter by post or email. Your own MP is obliged to reply.  If they don’t, complain to the Parliamentary Commissioner for Standards. Send out a press release and expose your MP on social media.

Ask your MP to forward your letter to the relevant Minister or Secretary of State. If they don’t, complain and publicise.

The Minister is bound by parliamentary convention to reply to every MP. Again a non-response is grounds for a complaint and publicity.

Attend your MP’s surgery, Covid-willing, as a group, demanding answers. Hold a mass phone-in to the Member’s office. Turn up at the Conservative constituency office. Film everything. Tell the world.

Picket the MP’s publicity events. You can find the details on the MP’s social media. Ask the awkward questions in front of the gathered press. Film, share, and expose. A placard is worth a thousand words.

After a few groups get started, someone somewhere will set up a co-ordinating website.

And that’s it, the route to removing 365 Tory MPs. The plan could be used to target local Tory politicians as well.

Why should the North East take the lead?  The region is best-placed for action, with seven new Blue Bricks in our Red Wall since the 2019 General Election who are just settling in. It’s time to loosen the mortar, and it has to start now, not three years down the road.

So can the North East do a Biden?