Can we expect a return to normality by March?

Vaccination would be the best exit strategy. 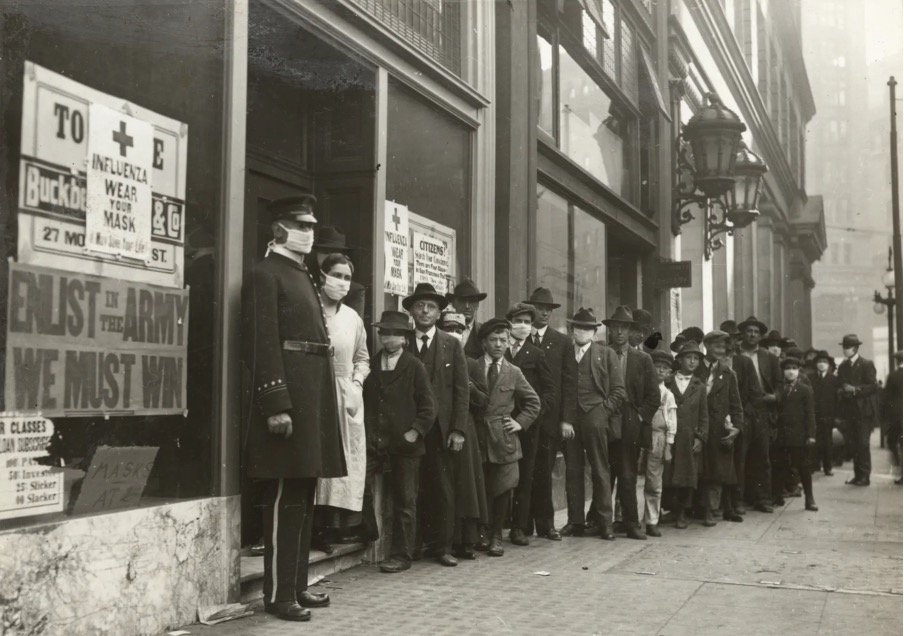 ‘Spanish’ flu in San Francisco in 1918. There were four waves and, in the absence of vaccines, the pandemic went on for more than two years. Photo Hamilton Henry Dobbin Public domain

Much depends on whether we have a vaccine, but it might not be full normality

On the 21st September, the chief medical officer and the chief scientific adviser told us that we should be prepared for ongoing restrictions over the next six months. Six months, though, is just a ballpark figure.

When this crisis ends depends on how it is going to end.

Vaccination would be the best exit strategy. With over 200 vaccines being assessed, it seems likely that one or more will be found to be safe and effective, but how long will it take? It takes longer to demonstrate vaccine safety, as opposed to just efficacy.

The US government announced that vaccination might start by 1st November, just two days before the presidential election. This was a politically motivated publicity stunt, as no phase 3 vaccine trials have been completed as yet.

The licensing of a Coronavirus vaccine has become a matter of political interference. A Medscape article argues that there are concerns not just about the data supporting the Chinese and Russian vaccines but, possibly, even about the US process. The US FDA could be pressurised to give an emergency use authorisation even in the absence of endorsement by the Vaccines and Related Biological Products Advisory Committee (a body staffed by independent scientists). If this happened, it would be a ‘red flag’ that could damage confidence in vaccines.

The Times on 3rd October reported a ‘government source’ saying that the UK could vaccinate its whole population in ‘six months or less’. However a report released by the Royal Society has a more realistic prediction: vaccinating the adult UK population could take up to one year.

Speed of vaccination in Western countries may depend on whether access to an initially limited supply of vaccine is restricted to a few countries or whether there would be a wider and more equitable distribution of the vaccine from the outset. An initial high price for the vaccines would also be a barrier for lower income countries.

A fundamental issue is the effectiveness of the coronavirus vaccines. The standard influenza vaccines, for instance, give a modest degree of protection (59% reduction in the risk of infection) and do not give any significant level of protection to individuals aged 75 or above.

The decreased effectiveness of vaccines in the elderly is a consequence of what is called immunosenescence: it would be a real problem if this happened with the coronavirus vaccines, as the elderly have the highest mortality rates.

Return to near normality in March would depend on what proportion of the population had been vaccinated. Without a vaccine, it would be less likely that we could return to normality. The influenza pandemic in 1918 went on for two years.

The reproduction number (R) of Covid-19 is about 3. For each 10% of the population that has acquired immunity, either through infection or vaccination, there would be a corresponding 10% reduction in R. This would mean that immunity in about 67% of the population would be required to reduce R to less than 1 and achieve ‘herd immunity’.

Recent studies of blood donors suggest that only about 6% of UK adults have Covid-19 antibodies suggestive of previous infection: this is much below the number thought to be required for herd immunity. However, 6% could be an underestimate and a larger proportion of the population may have T-cells reactivity (another form of immunity) to coronavirus because of previous infection with the Covid-19 virus or other related coronaviruses.

Furthermore, some researchers have challenged the classical model of herd immunity based on the assumption of homogeneous populations. What actually happens is that some individuals are more likely to spread the infection and get infected in the early phases of a pandemic. Thus – they say – it is possible that herd immunity might be achieved even when antibodies were detectable in just 10-20% of the population.

Nobody can make firm predictions on where we would be with this pandemic in March if we did not have a vaccine.^ I suspect we will not yet have reached the threshold for herd immunity but, after a protracted second wave, there might be enough immunity to allow control of the pandemic with less severe control measures.