What we can do as citizens is to ensure there is a viable planet for our grandchildren to inherit. 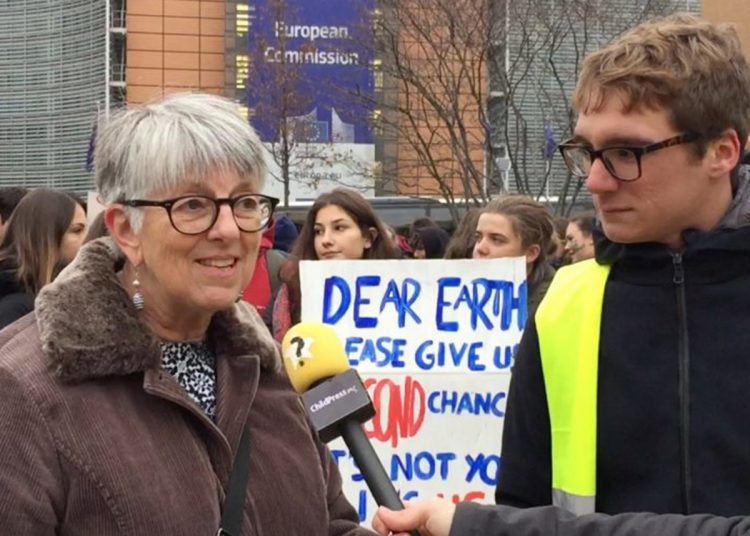 Under the inspiring leadership of Dr Sarah Price, Shildon-based Locomotion is forging ahead with an exciting and innovative programme despite the challenges of the coronavirus pandemic which forced the museum to close its doors to the public for much of the time last year. I was particularly thrilled to discover that, along with four other museums in the Science Museum Group, Locomotion is co-hosting a series of Climate Talks as part of online activities for 2021.

I caught up with these talks on 15 February when the iconic artist-activist, music-producer and former Roxy Music member, Brian Eno was in conversation with James Thornton, the Buddhist poet who became an environmental lawyer, subsequently setting up Client Earth as a means of holding politicians and governments to account by helping them to write good environmental law, and taking them to court when they fail to uphold legally enforceable standards.

‘Changing the System’ was the title of the talk but the focus was very much on personal and collective empowerment and how to build people-powered movements that can cut through political obfuscation to shift timid policy-making and institutional inertia, whilst also challenging the powerful corporate lobbies of the fossil-fuel industry.

Eno kicked off by describing how he moved from recording the outside world to simply listening to the sounds of nature. This led him to become a creator of ambient music, “celebrating the noise of the world”. Whilst the music industry has often been at the forefront of global campaigns such as Band Aid, Eno decided that it would be more effective to intervene before a catastrophe so he threw his weight behind Client Earth, becoming a trustee of what is a now a global powerhouse of activist lawyers operating from offices in seven different countries.

Whilst Eno is fascinated with cybernetics and complex systems, Thornton’s opening remarks served to offer a simplicity that we can all understand. “Society is made up of two things,” he said, “people and the law”. Working closely with civil society and lawmakers across the EU Client Earth has managed to herald the end the era of coal-fired power stations and stop illegal logging in Europe’s last ancient forest in Poland. Client Earth experts helped to write the EU sustainable fisheries law – which probably makes them Nigel Farage’s number 1 enemy. Further afield they supported the Torres Strait Islanders to bring a ground-breaking human rights case against the Australian government for climate inaction, and, as part of an EU environmental initiative they have been working with the Chinese authorities to train judges in environmental law, resulting in more than 140,000 legal challenges being filed against companies and government departments for violating those very same environmental laws.

Here in the UK Client Earth have taken the government to court and won three times over illegal air pollution which Thornton describes as “malign neglect”. He choked back tears as he recounted the story of Ella Kissi-Debrah, the nine year old girl who died in 2013 after a viciously short life blighted by breathing in noxious fumes and diesel particulate from the busy roads near her home in Lewisham. In December last year, a coroner’s court finally agreed that ‘air pollution’ was a major contributory factor in her death, stating that nitrogen dioxide emissions in Lewisham exceeded legal limits set by both the EU and the UK and that particulate matter levels were above the WHO guidelines. Furthermore, the coroner judged that the health effects of air pollution had been known for many years, and children and those with asthma were particularly at risk.

Thornton described his approach as working out “how to do jazz with the law”. Looking at graphs and charts he had seen temperatures going up and bio-diversity going down. “We needed to flip it,” he said, and added, “Exxon knew what they doing”. This was a reference to shocking revelations that the giant multi-national knew and understood the science of climate change as early as 1977 and orchestrated a deliberate campaign of misinformation and denial for decades. It is no surprise that President Trump’s pick for Secretary of State was former Exxon CEO, Rex Tillerson, who had been at the helm of the company for more than 40 years, presiding over controversial polluting operations as well as establishing a cosy relationship with Putin.

Unsurprisingly, both Thornton and Eno welcomed the departure of Trump and Biden’s early commitments on climate action, but they remain sceptical about whether Boris Johnson’s rhetoric on carbon-net zero targets are genuinely felt. Eno articulated that solving the climate crisis would also address other issues such as the need for international collaboration and human rights. “If we really took human rights seriously we wouldn’t be exporting our problems,” he said, adding, “We need an ecological approach”. Thornton expanded on the theme using the example of the Torres Strait Islanders who had been watching the bones of their ancestors being washed up and washed away by rising sea levels. In this instance, Client Earth are framing a human rights case against Australia for failing to protect the islanders from the effects of climate change. The case has already received an initial favourable hearing at the UN’s International Court of Justice.

The conversation moved on to consider what we as citizens can do to ensure there is a viable planet for our grandchildren to inherit. “Eat less meat… educate yourself… hold your parents to account… follow the money… Your money is either buying a hotter or a cooler climate,” said Eno.

There followed a lively Q&A session with Eno answering a question about the need for a broader education by suggesting that economics should be part of a future curriculum. I fully agree and suggest readers sign up to the Post-Crash Economics Society founded by a group of students at Manchester University, including Maeve Cohen who I knew as a bolshy pupil at Wolsingham Comprehensive when I was a Parent Governor a few years ago.

Eno also suggested that people needed “to curate their news”, adding with a shake of his head, “Why are we still reading The Times and The Sun?… We are on the cusp of a new kind of thinking… there are thousands of good news stories…”

The arts and artists are part of that movement for good. “It’s a way of making things valuable, celebrating things,” mused Eno. “The way we will save the world is to fall in love with it again.”

On that note, can I recommend that readers immediately avail themselves of a copy of “Letters To The Earth” recently published in a paperback edition, with an introduction by Emma Thompson. The anthology includes contributions from the famous and not-so-famous including Yoko Ono, Ben Okri, Kate Tempest and 15 year old Harkiran S. S. Dhingra whose words form the epilogue.

Brian Eno is amongst the hundreds of artists and arts organisations that have signed up to Culture Declares Emergency. Help to spread the word by asking your local arts centre and cultural organisation to add their support.

Sophia's new single brings her sound to a new level