Churches, wells and a labyrinth: a pilgrimage with Brendan McBear

Part 6 of the story of Brendan McBear and Chris Humble's pilgrimage through Middle England. Lots of visits to pilgrim sites. 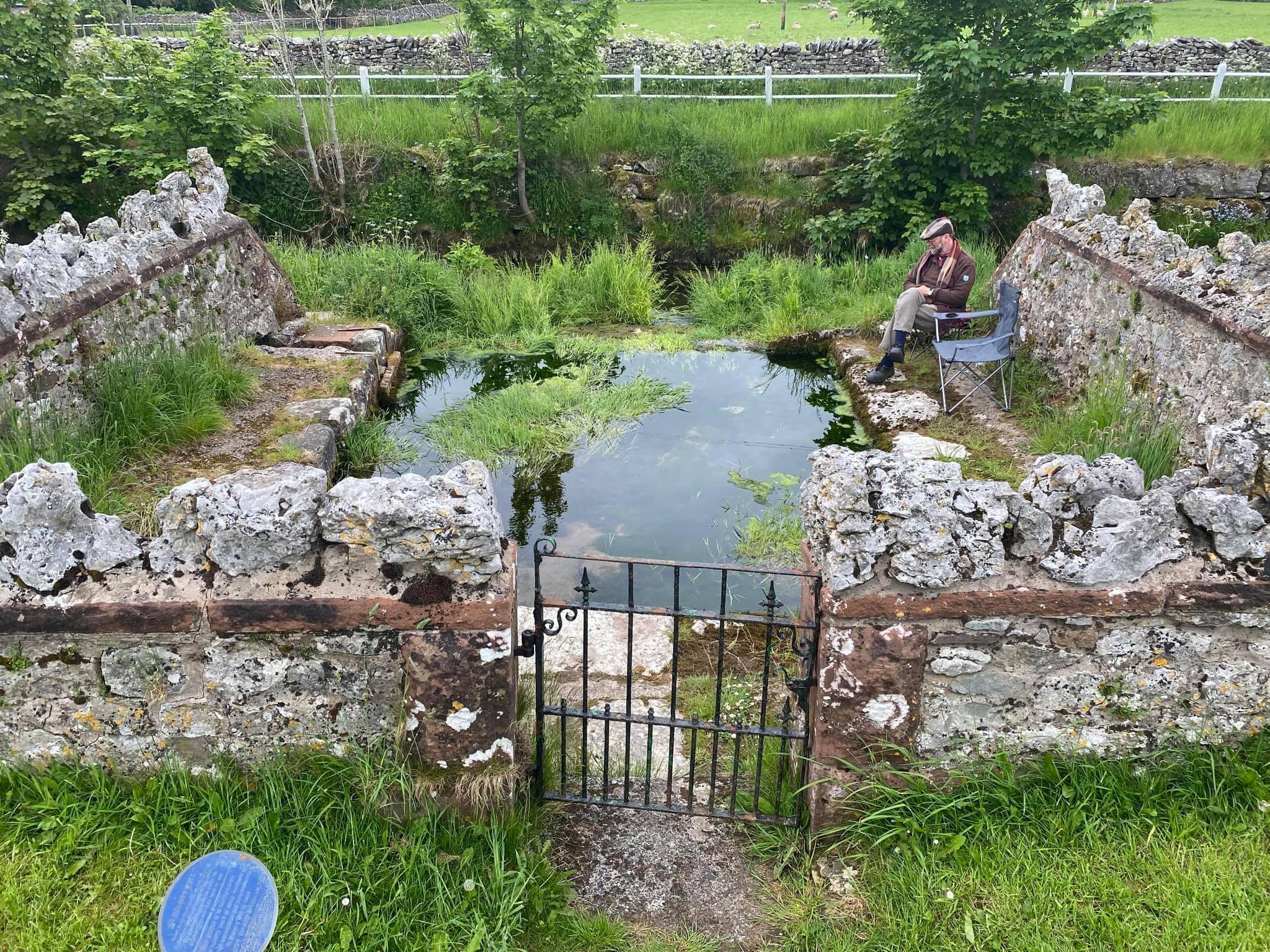 Going for a Burton

We went to Burton on Trent, trying (and more or less failing) to find any trace of 7th century St Modwen, who lived as a hermit on the island of Andresey, now a park to the east of the town centre.

An abbey was built on the mainland to house her shrine. A very nice restaurant called The Winery now occupies the site, but, as you can see from the photo of an arch from the chapter house closely inspected by Brendan, very little evidence remains of the abbey’s existence. Access to these remains did, however, provide an excuse for a nice light lunch, and this in turn led to the restaurant owners kindly digging out for us some information they had about Modwen to supplement the standard flyer they give out.

Heading for the island we did note that the parish church bears her name. We eventually found St Modwen’s well, a rather depressing affair fenced off by the council for safety reasons.

Although we’d only just reached the geographical halfway point of our journey we’d already visited two thirds of the pilgrim places that I’d identified as lying within the 25 mile travel corridor. Some of our readers may be pleased to realise that this means their torture is almost at an end!

The next stage of our journey was to accompany Jim Bailey – the Indiana Jones of labyrinths to three locations – Wakefield cathedral, St Peters church Addingham and St Mary’s church Kettlewell.

“Hulloo folks, Brendan here. Just to let you know that the next stop on our journey was Knaresborough, where we visited St Robert’s hermitage and the chapel of Our Lady on the Crag. Both of these were on the same road near the town centre about a mile apart. Amazing that one road (Abbey road by the river Nidd) has two separate chapels that are both cut into cliff faces, but there they are. The first one was open (it’s basically a cave) and the second one was closed cos of Covid. The Chapel of Our Lady is one of the oldest (1408) surviving wayside shrines in England and still holds occasional services. The big eejit wasn’t happy with our accommodation that night, but it’s all the same to me as i’m much less fussy than he is!”

Thanks Brendan, good to see you’ve been doing your homework. The next day, – following the grotty hotel (pretending not to be) that Brendan refers to – in the process of avoiding a breach of the self-imposed corridor rule, we were compensated with the most beautiful bus journey I’ve ever undertaken, from Knaresborough to Barnard Castle via Ripon and Richmond.

In Ripon we had a four hour layover that allowed us to visit St Wilfrid’s well, a disappointing, neglected, dry stone trough on the outskirts of town. His crypt in the cathedral was closed (Covid again) but we’ve been before and it is much more splendid than his well! The layover at Richmond was shorter, and not too shabby on account of the bus stop being right outside a pub with a beer garden. The journey took all day and we travelled through beautiful North Yorkshire countryside, villages, and Harrogate to reach Barnard Castle, where the bus dropped us 20 yards from our accommodation – which was a huge improvement on the previous night’s! A good day.

CJ to the rescue!

Examining the distances and virtually non-existent public transport options between our remaining six pilgrim places scattered widely throughout County Durham, Cumbria and Northumberland, we realised that we didn’t have remaining the energy to walk to them all – which would probably take well over a week – and wondered if we should have done the journey in reverse, from the Scottish border to the south coast, when we might have felt up to this challenge.

“Not so much of the ‘royal we’, I’ve got all the energy i started with!”

Yes Brendan, but you are travelling in my backpack and not monotonously putting one paw in front of another!

CJ to the rescue! I remembered that there were no rules other than the imposition of the corridor, and that my good old mate Christopher (CJ) had expressed a willingness to journey with us when we approached the North East. I wondered if he may be persuaded to bring his car! He was, bless him, and picked us up in Barnard Castle. Even with this transport it still took two full days to visit all six pilgrim places.

The first of these did not require CJ’s car, being a labyrinth situated in St Mary’s church, 200 yards from our B&B. And a very nice one it was too.

Then it was off to Great Asby to visit St Helen’s well, named after the mother of Constantine the Great, who apparently discovered ‘the true cross’ in Jerusalem early in the 4th Century. I can formally announce this as ‘best well of the journey’. What a fantastic spot! A thin place and no mistake. We hung around for a good while; CJ got his camping chairs out of the car (luxury!), and we said midday prayer together. One of the best visits of the pilgrimage.

Next up was St Ninian’s cave, which required a walk of over a mile each way from a small car park beside the A66. The cave, where Ninian is said to have taken refuge, is not easy to locate, set halfway up an almost vertical cliff face, and only viewable from the opposite side of the River Eamont. Nearby, and as remote as the cave, is St Ninian’s Church, know locally as ‘Ninekirks’. It’s not officially on our list, but it would have been churlish not to pop in, and how pleased we were that we did. Wholly renovated in the 17th century, it is extraordinarily preserved from that period, with stone-flagged floor, box pews, and a three-decker pulpit.

“Sure, and didn’t the eejit have the nerve to climb up in there and make like he was sermonising? As if anyone would listen to him! “

“Did this have something to do with the Oswald feller?”

Yes, very insightful of you Brendan. The church is half buried in a hillside, so eager were the builders to incorporate St Oswald’s well into the structure.

Bewcastle Cross is a very long way from…well, anywhere really! St Cuthbert’s church in the tiny village of Bewcastle hosts it, and it is well worth the journey (pun not intended). The village signpost showing the distance to Rome is a nice reminder that this was an outpost of the empire; the remains of a Roman fort lie 100 yards away from the cross.

And so to the last pilgrim place, St Cuthbert’s well in the Northumberland village of Bellingham. A very nice, working well, near the centre of the village. Brendan liked it.

Now we just had to get to the Scottish border. Our final instalment will detail this emotional journey.

You can read more in this series below