James Sheerin is keen to bring some fresh air to politics in more ways than one. 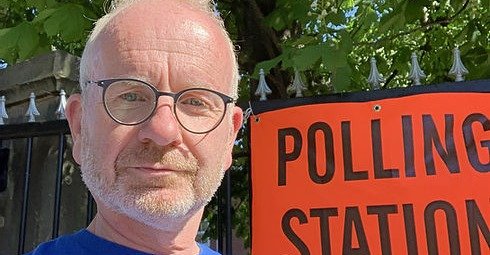 James Sheerin is keen to bring some fresh air to politics in more ways than one. He wants a real change for the better for his local area and he wants to see this through a pro-European, pro-environmental agenda which will benefit all of us and especially our young people.

James is standing as an independent for Gosforth ward in Newcastle. He feels that we need to cooperate across a party system that has largely let many of us down. I asked James some questions about what motivated him to ger involved in politics and what he would do and would like to see if elected this May.

Why are you standing as an independent for the coming May elections?

“Politics needs some fresh air. Locally and in Newcastle everything is very stale just now. The party system has to bear a lot of responsibility for this.  I don’t want to be part of that.  Being different, cooperating with each other to achieve what is best for our country and our local area, is more important now than ever. I want a change.

Nationally the Conservative party has driven away many supporters who don’t agree with the hard right, anti-welfare state, anti-European, racist and authoritarian policies that Jacob Rees-Mogg, Dominic Raab, Michael Gove, Boris Johnson and Dominic Cummings have put at the centre of the Conservative Party.

Many decent traditional conservative voters can hardly recognise the party they joined.

Here in Newcastle, massively important issues like addressing traffic pollution and our city environment are being held back by failure of the Lib Dems and Labour to engage properly and achieve a consensus on the way forward. Whether you have always voted Conservative, Labour or Liberal Democrat I am offering local people the chance to put party politics aside and actually start making progress.

The failure of politicians in Newcastle, including the Liberal Democrats in Gosforth, is killing people. You can’t get much more serious than that.

I want to bring fresh air into politics and, most of all to the centre of my local area, Gosforth High Street.”

What would be your key priorities if you are elected?

“Without doubt, fresh air on Gosforth High Street. And yes, I will get that bus stop moved! Better still, I will work with others to ensure that all buses using the High Street are non-polluting, using renewable clean energy.

The very worst thing about Gosforth is what should be its very best, the High Street. Far from being its greatest asset, which it should be, it is a scar running right through the ward I hope to represent.

Even before Covid-19 it was struggling. It is being suffocated, like the people who use it, by traffic pollution. Gosforth High Street is the most polluted street in Newcastle, having levels of NO2 and other pollutants way in excess of legal levels.

We urgently need to look again at the Clean Air Zone proposals for Gosforth opposed by the current Lib Dem Councillors.  I know the CAZ wasn’t universally popular with local residents, but sometimes responsible politicians have to take difficult decisions.

Our local councillors should have helped educate and convince residents about the need for the CAZ.  They should have sought to find ways of making it work in the High Street and looked at opportunities it could bring for local businesses and the much-needed renewal of the High Street. They should not have opposed it.

The watered-down proposals are a threat to the High Street.  It’s difficult to see how they can make things better for Gosforth.

I spent a few days’ holiday in Maastricht last year.  All the buses in that city are electrically powered and drive quietly at sensible speeds.  They share the city streets with pedestrians, cyclists and only those cars and other forms of transport which are necessary for the proper functioning of businesses and the services we all expect.

We need a decent and clean public transport service in Newcastle so that people actually want to use it rather than their cars.

I remember two greengrocers’ shops on the High Street which used to display produce on the pavement outside the shops.  I want to make it safe again for business to be done this way.  A clean, green, European High Street, with bars and cafes able to use pavement areas (when our weather allows!) would be a major attraction and bring shoppers and visitors.  The High Street could be the life force of Gosforth again and not another problem.

Of course, being a councillor for a local ward means that you are also responsible for the whole of our beautiful City of Newcastle.  Newcastle is a very positive City with much to boast about.  It also has a high level of deprivation.  65,000 people in Newcastle (twenty per cent of the City’s population) live in the top ten per cent of areas of deprivation in the UK. As a whole our city is the 53rd most deprived local authority area out of 326 in the country. This just isn’t good enough for a city with so much going for it.

All councillors have an obligation to address this. I believe that one of the essential ingredients of improving wellbeing is education. I don’t just mean passing exams and going to university.  Primarily I mean inspiring young people and opening their horizons.  It’s so sad that one of the ways of doing this, the Erasmus scheme, has been closed down by the government as part of its anti-European programme.

I will encourage the council, our two great universities, our schools and other educators to foster links with our twin cities in Europe to fill the gap created by this scheme. It would be an amazing achievement for Newcastle if it could lead the UK in doing this.  Understanding and experiencing other cultures should not just be restricted to university education.  We should look at broader involvement for young people in differing environments.  It’s only by understanding each other that the UK can become the outward looking and welcoming nation it needs to be if it is going to be a success.”

How can local councillors make a difference to the Brexit/Europe issue?

“In February 2020, when the UK left the EU, a group of us were sitting around asking the question “What do we do now?”.  There is a plethora of pro-EU pressure groups, small political parties, local grass roots groups and protest groups. I’ve concentrated my efforts over the last five years in supporting North East for Europe and the SODEM parliamentary protest started by Steven Bray. We need to keep many of these going, but the only way we are going to change things and get the UK back in its rightful place in the European Union is to start at the beginning. We need to get pro-EU men and women (hopefully particularly young men and women) elected at all levels of government, locally and nationally.  That way we can raise European issues wherever they are relevant. Parish Councils, Town Councils, District Councils, County Councils, City Councils and Regional Assemblies all provide an opportunity for the European voice to be heard.

It took Nigel Farage twenty years to achieve his objective of taking the UK out of the EU.  He only ever had one MP elected as a member of UKIP or the Brexit Party.  We are so much better than Nigel Farage, so let’s get to it!”

In what practical and local ways can you influence the green agenda?

“So many people have said it that it’s hard to repeat without sounding trite, but we can only change the world in small steps. I’ve told you what my priorities are for Gosforth.  The truth is that even these small steps are very ambitious and possibly beyond the capacity of one councillor to change.  That’s why we always need to work together. I will cooperate with anyone to further the green agenda, whether or not I agree with other policies or plans they may have.

In my personal life I have tried to do the right thing environmentally, but I know there is much I could do better.  I generate electricity on my roof with solar panels, I drive a small electrically powered vehicle, I’m installing an electrically powered heat pump heating system and will be having my gas supply disconnected.  Not everyone can do that, but the more we do the more others will be encouraged to follow. I know I have many failings too.  I drive a diesel-powered motorhome, I’ve been shopping far too much online during the virus emergency, I regularly buy produce covered in unnecessary plastic.  I do have a beard and occasionally wear sandals too!

As a councillor there are big things and little things that I could do.  I would love to find a way of introducing a waste food collection in Gosforth.  It’s frankly embarrassing that little towns in the Scottish Borders and elsewhere have weekly waste food collections but that we don’t in Newcastle. Home composting isn’t for everyone.  Usually in Newcastle waste food is put into plastic bags, thrown in the wheelie bin and ends up in landfill.  If we can find a way of doing things locally in Gosforth that puts an end to that it would be an excellent start.

The important thing is to make people realise that their actions do make a difference, whether to help save or to haste the destruction of our endangered planet.”

You can read more about James’s campaign here.

Once upon a time in vaccination land

Once upon a time in vaccination land