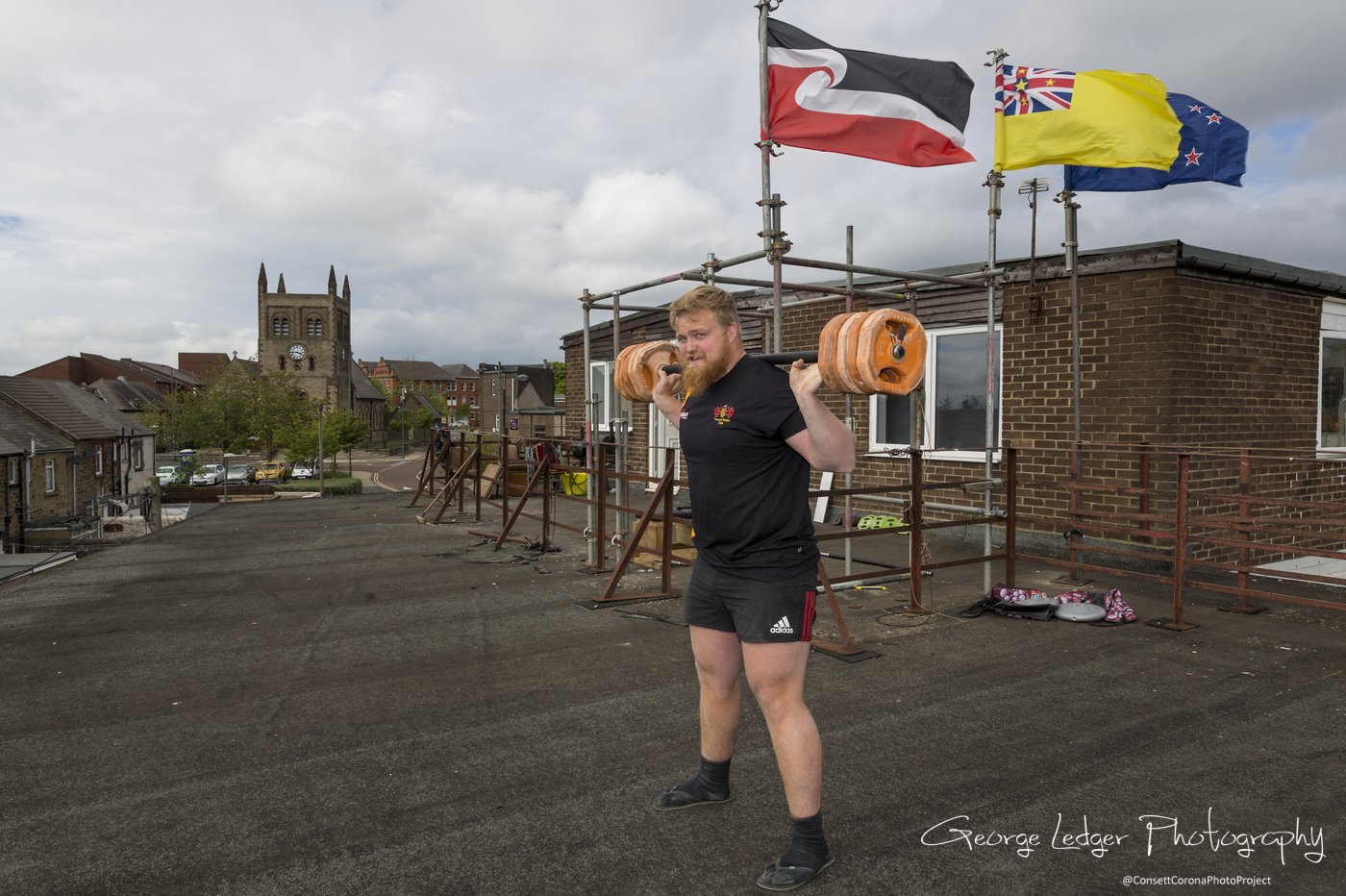 On 23 March 2020, the Prime Minister delivered a very simple instruction to the British public: “you must stay at home.” Since this dependence day, and the introduction into popular discourse of the word ‘lockdown’, people have adapted to a host of alien measures and customs.

Social distancing, mandated isolation, face cloths, PPE, and those perpetual lockdowns, have all combined to form images once restricted to a Hollywood filmset; not to mention a cultural and social atmosphere unique to our country since perhaps the time of the Second World War. And the invocation of that same spirit has allowed our combined sense of solidarity and human togetherness to percolate through the grey reality of the pandemic. And in doing so this has led to the creation of many unique and wonderful images.

We were delighted that local photographer George Ledger agreed to join us to discuss his ‘Consett Corona Photo Project’ and the success it has achieved, and to share some of his favourite moments. The project began as a way of recording the pandemic within the community of Mr Ledger’s hometown of Consett, but it swiftly expanded to include volunteer groups, businesses and shops. And in January of this year the project added three extra photographers and had finished over 170 shoots.

I invited Mr Ledger to tell us a little bit about himself and the project, and how it all came about.

“I have been a professional photographer for ten years now, having retired from the police force. The project came about because of the coronavirus in March. More or less overnight my photography business stopped. I am a sports photographer – all the major sports, football, athletics, basketball, rugby. One weekend I was in Edinburgh photographing the Six Nations up at Murrayfield; the next weekend: nope.”

This immediate retirement of ‘normality’ as we knew it was as much a shock to George as it was to everyone else. But it did provide one thing: family time. George is (incredibly) a grandfather. “Taking the family for long walks, the same as everybody else,” was the substitute for his work. However, it soon became apparent that this was radically different to anything that had happened in his lifetime, or any lifetime since those old enough to remember the last World War.

The beginning of the project in Consett

George had a thirst that needed to be slaked, and the desolate streets of a ‘locked down’ Consett provided him an opportunity to get out with his camera and do just that. But the project really began to germinate after one encounter in particular:

“My project really started with a gentleman in a village close to us, who was due to have an exhibition of old photographs and memorabilia from the war. He was in his mid-eighties and thought just because the community centre’s closed, that’s not going to stop me showing my photos. So he hauled everything out into his garden and luckily for us it was a sunny day. He erected a flagpole, put up a flag, and put all his photographs on painting and decorating tables, and sat next to them.”

The gentleman received a steady stream of visitors to his exhibition, including George and his wife, but what was influential to George was the interest shown by every generation that visited. They were all united through an interest in the pictures of such an event in history and a passionate desire never to forget.

“I thought, ‘this is seventy-five years later, and people are still interested in this event.’ Coronavirus, the lockdown, this is the biggest thing that’s ever happened in my lifetime. So, being a photographer, I have to try to record it. From that day, things changed from trying to record pictures of empty streets to taking pictures of people doing something about it, not letting the virus take over their lives.”

A change in style and a sense of engagement in Consett

I asked whether there was any difference between the sports photography he was used to and this nomadic style of photography.

“It was less physical. It was more or less carrying the single camera and lens. Instead of being three steps away from the action, I was now having to get involved, and speaking to people; it was great.”

And he “very, very quickly realised that the sense of community, the sense of engagement, was changing,” as a result of the isolation most people were feeling. The desire to speak to someone, even a stranger, was something that George noticed in people, even when just out walking with his wife. The starvation of our social impulse was driving people closer together. “Engagement was happening all the time; it was very enjoyable.”

This continued to grow as the lockdown extended. The clap for carers every Thursday night soon became a weekly social event for George’s street, lasting long after the applause. And on the organised side, George tells me of a local shopkeeper who set up a community volunteers group, using social media to get over eighty volunteers to do whatever they could – including the wonderful story of a tennis coach producing the clips for facemasks with a 3-D printer in his shed.

“They did everything for them from making sandwiches and putting food parcels together to doing children activities, picking up prescriptions, walking the dogs of those who are isolating. A lot of things that people probably didn’t even think about.”

The sense of solidarity and community steadily grew as the lockdown continued. A wonderful example of this is the story George told me of the woman who, every Sunday morning, would go out and play the cornet. She was a member of the Salvation Army band, and was unable to attend her church, so she went out each Sunday morning and brought the hymns to the community. And it was not just a case of George capturing the special moments during the pandemic, but also of his helping engender and feed such feelings of mirth and togetherness.

“Every single person we’ve photographed until now, we’ve always given them all the photos we’ve taken. Luckily enough most people have emails – I think for only three people we’ve had to print images and take them round. But in that conversation it’s a case of ‘here’s the images, give us your email, and if there’s anyone else you think should be photographed please tell me.’ So the ball started rolling and just got bigger and bigger. The number of nominations we were getting was almost ridiculous. This was right from the start when I was doing it all by myself.”

In the beginning George tells me he was going out two or three times a week to do the photoshoots, for quite a few hours a day, looking for the various people. I asked whether the search was as nomadic as it sounds, or whether there was some method from the beginning.

“No, most of it was pre-planned. It was a case of ‘right we know this person, I want to do this photograph of, say, the local vicar, or somebody planting flowerbeds.’ If we bump into somebody, then, yes.”

And there was one special case of a spontaneous photoshoot which happens to be the most popular photograph on project’s Facebook page. It involved the local refuse collectors. On his way to a separate shoot one morning, George saw that the binmen were there. He had a chat with them and explained what he was doing with his project:

“And this was before anything had been posted on Facebook or anything like that. And he said ‘just a second, just a second! I’ll be back!’ and he disappeared into the estate with the bin wagon, and came back in convoy with two other bin wagons. He said, ‘I had to bring this one back because we’ve just got the new Thank You NHS stickers on the side!’ We completely blocked the street. We could only get two side-by-side. We took the pictures and off they went.”

Mon – Sat for 3 weeks ending on Friday 13th Aug.
It is all outdoors in the hospices gardens.