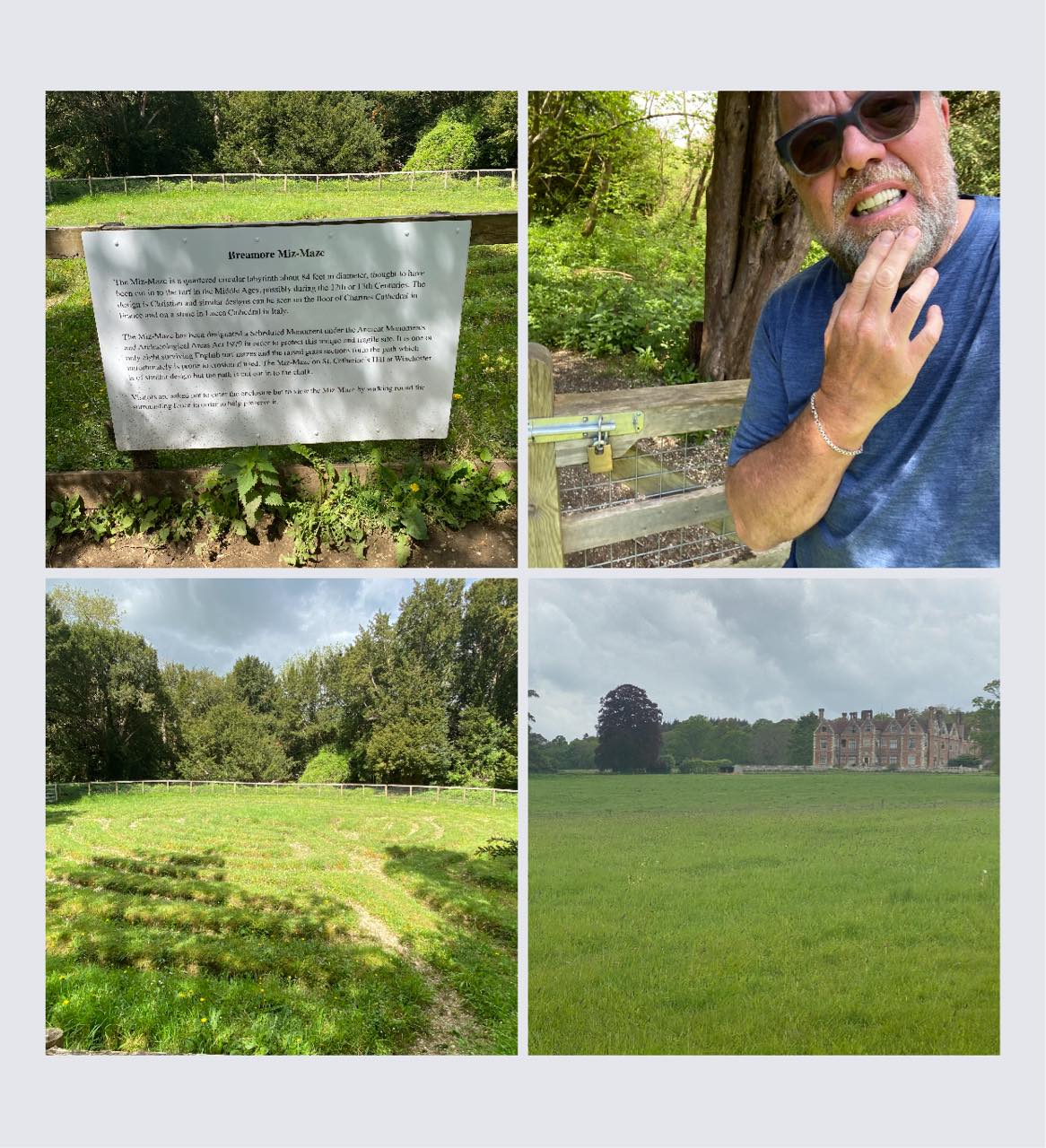 Brendan is a bear. He would describe himself as a New Monastic Celt when he’s not too busy taking the mickey out of The Big Eejit or BE – his companion and sometime mentor. His association with Chris Humble began when the Northumbria Community asked Chris to take him on pilgrimage. This is their third and most recent outing, and you will hopefully see why Chris counts on Brendan’s Celtic charm and ready wit to make friends and open doors!

The day began with a 6.45am flight from Newcastle to Southampton. Whilst waiting to board I read the Northumbria Community daily reading from Eata:

This advice soon proved wise; as we descended towards Southampton we had the most wonderful view of Winchester Cathedral.

I dumped my bag at Christchurch Travelodge and headed to the start point.

“Not only did the eejit dump his bag but also me inside it. In such a hurry was he to get started he forgot that there’s two of us on this pilgrimage!”

Sorry Brendan, you’re right, I was eager to begin, but don’t worry, there will be plenty of opportunities for you to be involved.

Counter intuitively I didn’t immediately head North, but east onto Hengistbury Head and round to the ferry terminal where I caught the ferry to Christchurch Priory, a fantastic 11th century building that stands equal with some of our finest cathedrals. North tomorrow…

Middle England: the adventure starts for Brendan and Chris

A quite extraordinary beginning.

So much happened, so much to tell. Here are a few highlights.

Me and the Bear headed north from Christchurch with Fordingbridge and Breamore Miz-Maze labyrinth in our sights. Our list of pilgrim places to visit comprises all those (that fall within our travel corridor) featured in the newly published tome ‘Britain’s Pilgrim Places’, an essential comprehensive reference work for any self-respecting pilgrim. I haven’t been so excited about a book since I was a child.

In addition to these places I added a number of labyrinths, as recommended by Labyrinth King and friend of our journey, Jim Bailey.

On arrival we found the gates of the Breamore Estate firmly locked and not a soul to be found. Not a great start. The labyrinth lies several miles inside the estate, up the main drive – which is clearly marked as a public footpath on the Ordnance Survey map and uphill via a long track. I consulted Brendan and we decided we had no option but to exercise our right of way. Tackling the towering main gates was not an option without climbing equipment and a brazen amount of impudence sufficient to get us shot.

We scouted the surrounds of the exceedingly well-to-do estate and found a path leading to another locked but less observed and more scaleable gate. We clambered over and headed towards the side of the main house with its countless windows. I was ready with my justifications but the only attention we attracted was from a couple of groomsmen leading some horses at a distance, who merely glanced at us and went about their business.

Further up the track through the woods we encountered a group of tweedy young men coming downhill. I gave them my best country-style ‘Good Morning’ and on we went, eventually reaching the labyrinth, set within a small copse. It was locked. Once again Brendan and I consulted.

“Right enough so we did, and I told the big eejit what I thought about locked gates and closed footpaths and the like. He says I’m not allowed to divulge the decision we came to; suffice to say that I very much enjoyed looking at the Breamore Miz-Maze labyrinth.”

After this adventurous first day we made tracks into Salisbury and found lodgings that were cheap and cheerful but not altogether sanitary; I was scratching the fleabite I acquired there for several days.

Corridor issues for Brendan and Chris

I’ve explained my commitment to staying within a 25 mile wide corridor in order to genuinely experience the middle of England and give some discipline to the journey. I knew this may occasionally present problems, but wasn’t expecting one so early on. We needed to get to Didcot. There was no bus route and the train would only get there via Basingstoke or Reading to the east, or Bath to the west – all outside the corridor.

We considered getting an Uber at a cost of £22 but then worked out we could get the train to Reading West (just inside the boundary) and a bus to Tilehurst – the first station west of Reading – to pick up the Didcot line. It was a proper palaver, took about 3 hours and – yes, you guessed it – cost £22.50!

However, this did afford us the opportunity for a nice chat with a trainspotter on the Tilehurst platform. He seemed to totally get what we were up to… I guess it takes a nerd to know a nerd!

We stayed near Didcot and the following morning walked up to Churn Knob, a small tumulus from where St Birinus used to preach to the assembled masses. Apparently in 634 his audience included King Cynegils of Wessex, who subsequently became a convert.

You can read more below