MI5 and police have made the point that the threat posed by the extreme right in the north and elsewhere is greater now than at any other time since the 1930s. 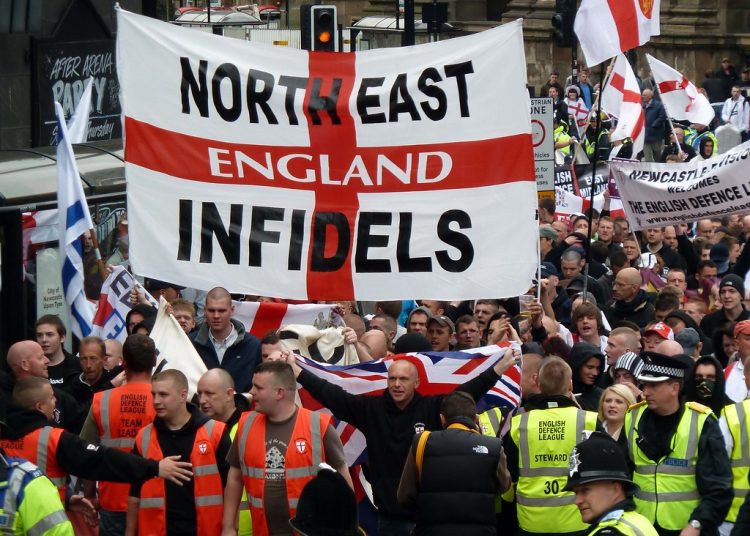 Far right organisations like For Britain, led by Anne Marie Waters, are targeting the North East, especially Hartlepool, to stir up racial hatred and social unrest. MI5 and police have made the point that the threat posed by the extreme right in the north and elsewhere is greater now than at any other time since the 1930s.

Fascism which gained prominence in inter-war Europe with the rise of Hitler, Mussolini and Franco has resurfaced. A doctrine of extreme nationalism, based on race hatred, it’s a 20th century phenomenon. One variant of fascism appeared on British soil in 1932 against a backcloth of mass unemployment and social dislocation. This was the British Union of Fascists, headed up by Sir Oswald Mosley.

Mosley, a former Conservative and Labour MP, (supported by the Miners’ leader Arthur Cook), put forward a plan for economic regeneration – ‘Britain First’ which combined the idea of the ‘corporate state’ with government protection of heavy industry. Mosley was essentially fascist in his attacks on parliamentary democracy, the tired old men of the ‘establishment’ and communism. He was committed to crushing the trade union and labour movement. Mosely’s BUF blamed the Jews for the country’s woes.

Between 1932 and 1934 the BUF recruited thousands of members, especially amongst young working class youth. By 1934 Mosley’s Blackshirts numbered 34,000. Blackshirts organised rallies, marches and street violence in towns across the north including South Shields. Mosley’s appeal lay in his charismatic ability to persuade people that his party would restore jobs in the economically depressed north. He not only gained support from some of the working-class like Cook, but attracted active members from both the aristocracy namely the 8th duke of Northumberland, and middle- class conservatives. They shared his idea of white supremacy, patriotism, commitment to law and order, free speech and ”English methods”.

According to Newcastle University historian Martin Pugh the ”fascist appeal” varied from one part of the country to another. In the depressed region of Lancashire Mosley claimed that the cotton industry could be saved by crushing Indian manufacturing and imposing import controls. For local historian Nigel Todd Mosley’s Blackshirts targeted the inactive munitions factories and silent shipyards on Tyne and Wear during the best part of the period. Unemployment was widespread and grinding poverty was endemic in Sunderland, Jarrow and North Shields.

Yet the BUF’s poisonous ideology owed something to the impact of the better-organised fascist movements in Germany, Italy and Spain. Mosley got financial support from Mussolini and married into the Mitford family who were on warm terms with Hitler. By 1936 the BUF emulated the Nazis in attacking the Jewish community in the east end of London, which it treated as a scapegoat for the economic problems of the nation.

Despite its rapid growth, the BUF lost momentum by 1937. This has been attributed to public reaction towards street violence of the Blackshirts which alienated the respectable middle classes. For some writers, fascism never posed a real threat to parliamentary democracy after 1934. Britain’s political culture was durable and moderate. Respect for constitutionalism and the rule of law was key. For the political scientist Bill Coxall fascism was alien to our democratic values, institutions and traditions.

Yet Pugh argues this is too complacent a viewpoint. The recruitment of thousands of working class young men into the BUF, marked by its quasi-military style, was solid evidence that violence continued to be part of the UK’s political tradition. Mosley’s ambitions were prevented less by political culture than by economic factors.

Although the north, parts of Scotland and Wales were hit hard by the recession the unemployment crisis was worse in Germany and North America in the inter-war period. Unlike in Nazi Germany where soaring inflation destroyed the savings of the middle class, incomes for British ‘black coated’ clerks remained stable. Fascism held little appeal.

From 1937 much of Britain was recovering economically which confined the BUF to the margins of society. The drift towards war with Germany made Mosley appear a traitor in the eyes of many. By 1939 the fascist movement in Britain was effectively finished. Mosley was imprisoned. In 1949 he had moved to France.

It’s been clear for some time that the violent element within the 21st century far-right identifies very closely with the European fascism of the 1930s. The neo-Nazi EDL and its cousin Britain First repeat the slogans and copy their beliefs. They are ultra-nationalist, anti-immigrant, anti-semitic, Islamophobic and racist. The old BNP has been eclipsed by UKIP and For Britain, both racialised parties, the latter is in serious danger of becoming a national socialist party. Both parties are expected to field a large number of candidates in the May 2021 elections in Hartlepool and Sunderland building on their electoral breakthrough in 2019.

For the best part of the last century fascism has faded away. It comes and goes; witness the rise of the National Front in the seventies and the BNP in the noughties. It hasn’t died. That’s why the decision by central government to ban the neo-Nazi group National Action was right.  In 2016 the Government unveiled its FBVs programme followed by the launch of the Building A Stronger Britain Together programme to address concerns about the growth of far-right groups and ”Islamo-facism” in local communities and schools.

According to the Teesside University academic Paul Stocker the re-emergence of the extreme  populist right is as much a cultural phenomenon as an economic one. But as other experts point out, the core lesson from inter-war Britain us that this nativist populism only comes alive when government fails to address the anxieties of the dispossessed living in left-behind post-industrial towns and coastal communities in the north. Ending austerity and challenging embedded societal inequalities in income, wealth and material condition is one way to prevent the seeds of proto-fascism taking root in the UK’s post-Brexit left-out communities.

Getting old: the reality