The lateral flow test that the government intends for mass testing is potentially less sensitive than RT-PCR. 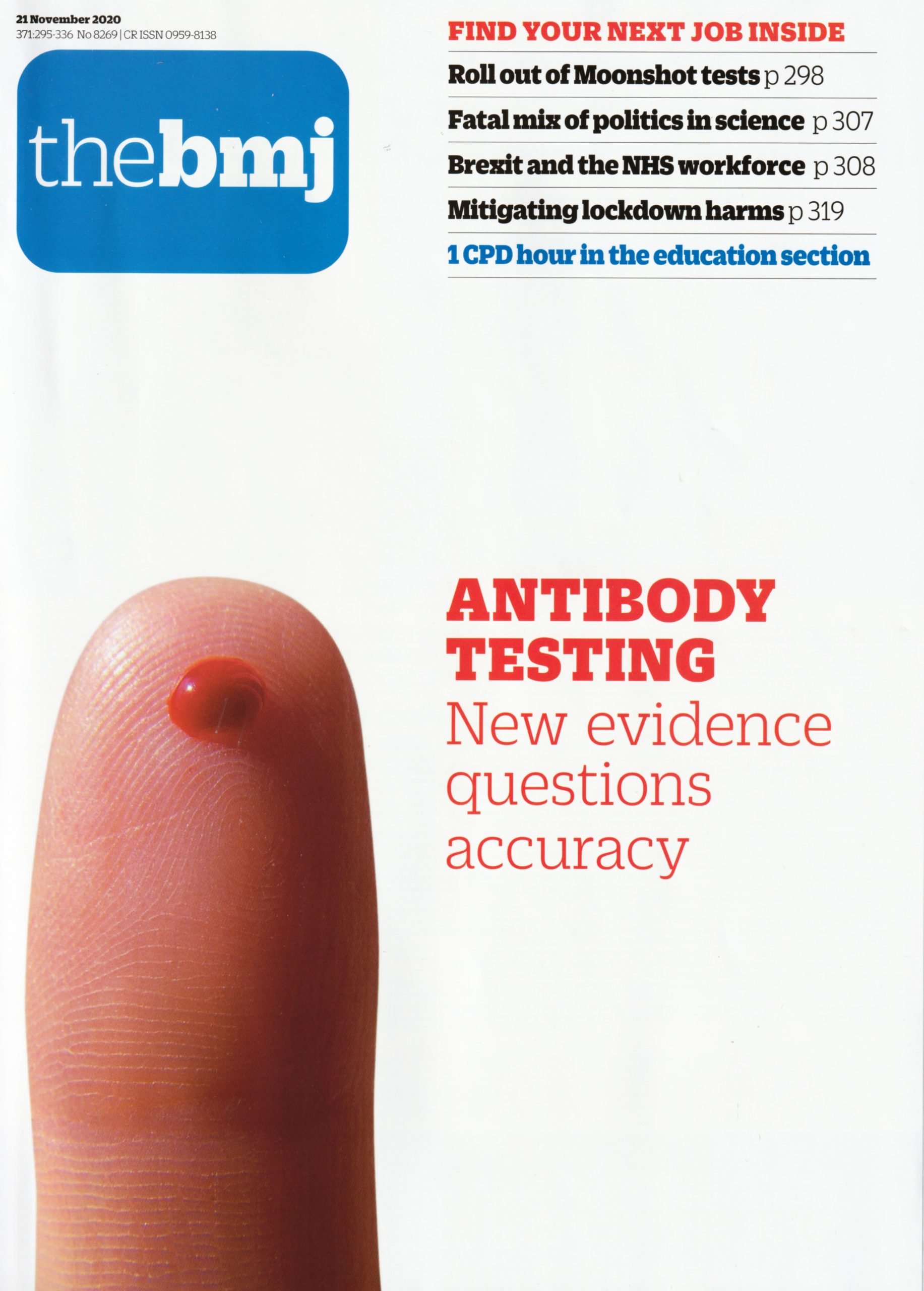 The cover of the British Medical Journal (BMJ) 12 November 2020, shared with permission

For people with Covid-19 symptoms testing is useful, it allows treatment and public health interventions, such as self-isolation and contact-tracing. Testing is usually done with a reverse transcriptase polymerase chain reaction (RT-PCR) test and the result needs to be interpreted bearing in mind the clinical context, as any test can give both false-negative and false-positive results. Lay people understandably believe a negative RT-PCR test means they are not infected. This assumption may be wrong, because the sensitivity of the RT-PCR test might only be around 70%.  A review of Covid-19 test accuracy ‘reported false negative rates of between 2% and 29% … based on negative RT-PCR tests which were positive on repeat testing’. In a hospital setting an unexpected negative result in a patient with typical symptoms would be followed by repeat testing.

The lateral flow test that the government intends for mass testing is potentially less sensitive than RT-PCR, especially when used by self-trained members of the public. Is there a point in using tests that miss half or more of the infection cases? The introduction of population screening, with awareness of the test results, is likely to inform behaviour, but misplaced ‘reassurance from missed cases could potentially increase [infection] transmission’.

One article in the BMJ discusses questions raised as to why Covid-19 screening has been set up without the involvement of the National Screening Committee, the UK body that has experience about the limitations and pitfalls of mass testing.

It is not just mass testing that attracts criticism. The BMJ reports that the Government’s contract for one million ‘rapid’ antibody tests was a misuse of taxpayer’s money. The UK government faces legal action over the award of a £75million contract, signed without competitive public tender. Furthermore, a combined Public Health England, Bristol, Cambridge and Warwick Universities study critical of this ‘rapid’ test kit had been suppressed. We are also increasingly aware that antibody testing may have little practical value in identifying those who have suffered from Covid-19, as antibody levels decline within a few months.

The £75m wasted on antibody tests pales into insignificance when compared with the £18 billion spent on Covid-19 contracts over the period up to 31st July. This huge expenditure has attracted criticism by the National Audit Office for the absence of documentation on why specific providers were chosen and on potential conflict of interests.

Other national media have been critical about the way hundreds of firms had been fast-tracked to win lucrative Covid-19 contracts on the basis of recommendation from Conservative ministers and MPs. There has also been the curious incident of a US jewellery designer who had secured £250m worth of contracts to supply protective equipment to the NHS. He seemed to be out of his depth and subsequently paid £21m (UK taxpayers’ money) to a Spanish businessman. The details of this case came to light after a legal dispute between the two intermediaries in Miami.

Finally, a 13 November BMJ editorial  discussion on the suppression of Covid-19 science points out the worrying evidence that ‘Covid-19 has unleashed state corruption on a grand scale’. This concern is further documented by  Sophie Hill in The Guardian on 21 November, she argues that Tories’ “chumocracy” over Covid-19 contracts is destroying public trust.