Part 3 of Peter Lathan's journal Covid and me. This time from the beginning of 2021 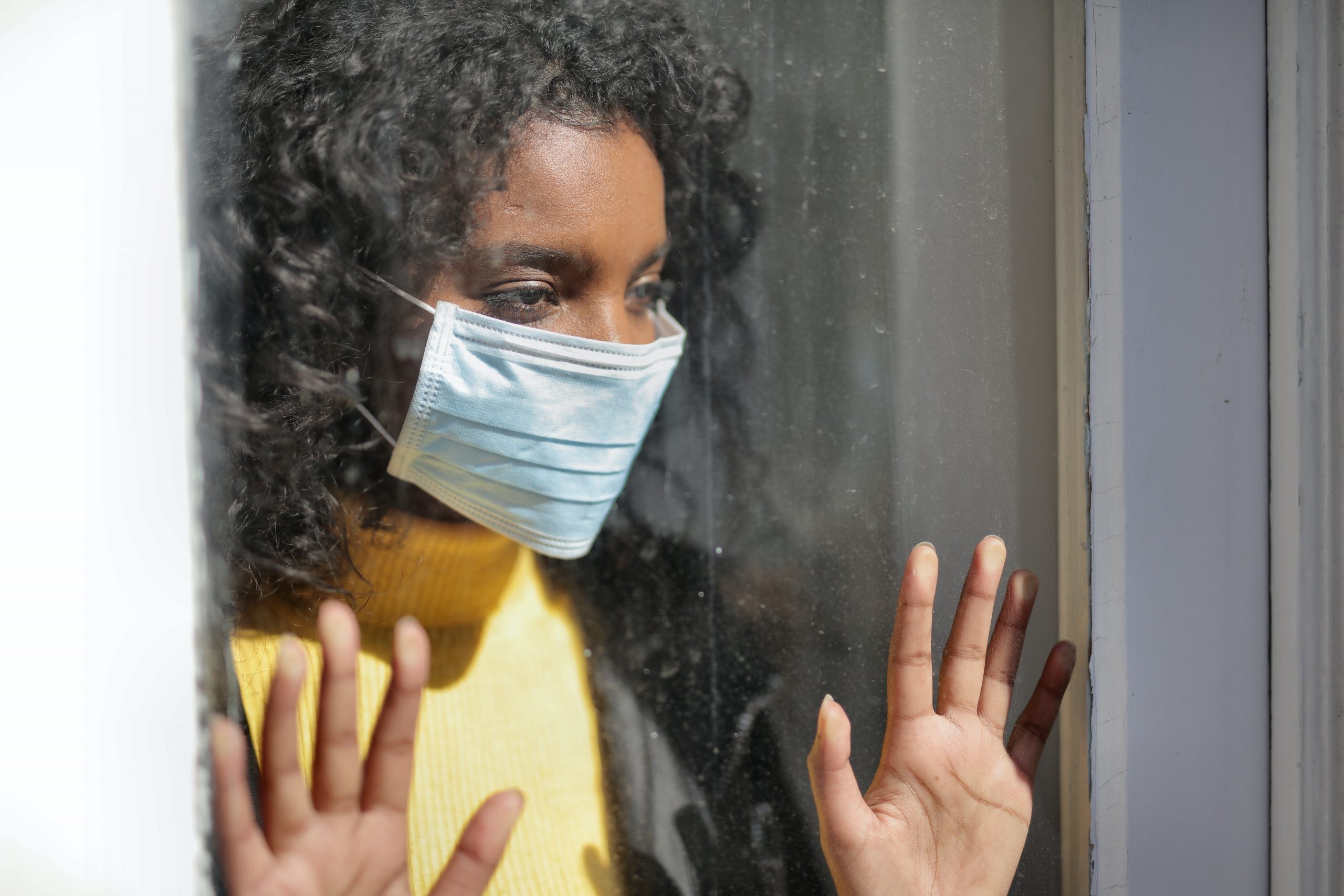 Photo by Andrea Piacquadio from Pexels

It was midnight, the last midnight of 2020, and Covid 19, clothed in black drab, mystic, horrible, spoke.

“You don’t think I’m going to go quietly, do you? That I’ll just scuttle off before a flurry of fireworks and the singing of Auld Lang Syne?

And the Covid support act, Lozza Fox and the Reclaimers, breaking every social distancing rule, struck up its signature tune:

Every day, for the last four or five days, I’ve sat down in front of the computer and been unable to write anything. No ideas, or if I had any, they imploded, leaving not a rack behind.

Yesterday was grey. Everything was grey: the sky, the light, the few people who walked past my window, my mood. I sat here, at the keyboard, ready to type something along the lines of it being a grey day but I didn’t because I couldn’t think what else to write.

The previous day had been the same. Round about three or four o’clock the previous night I’d woken up and jotted down a couple of ideas that had just occurred to me in the notebook I keep beside my bed. So that morning I started the computer, looked at my notes from the night before, said “Oh sod it!” and watched telly for the rest of the day.

We are more than a week into a new year. So what? If there’s one thing isolation has taught me it’s that every day is the same as every other day unless, somehow, you make it different.

New Year’s Day was my Day 305 of isolation. More than 300 days. Now into the eleventh month. But nothing happens. Yes. Life goes on, but I only see it through a television screen. Or a window.

My hair’s longer than it’s been since 1979 but it’s a dirty grey. My eyes are red-rimmed. My face is lined and my cheeks slightly sunken, even though I’ve piled on the weight.

You know that awful fear of being asleep and a spider coming down from the ceiling onto your face and possibly even walking into your mouth? It happened to me in the middle of last night.

Or at least I thought it did.

I woke up suddenly because there was something gently moving across my face. I sat up frantically trying to brush whatever it was away. I switched on the bedside lamp and hunted round for the offending “thing”. I even got up and turned the sheet and the duvet right back but couldn’t see anything. I looked all over the floor, but there was nothing there. I looked up at the ceiling but there was no dangling thread or bit of spider’s web, so in the end I just put it down to imagination and went back to sleep.

I’m not scared of spiders – well, not of house spiders; the big buggers are a different kettle of fish though – but it took a while before I started to drift off to sleep. Then it happened again.

I shot up, grabbing at my face and got hold of – a hair! One of my own hairs at that.

I last went to the barber’s just before Christmas 2019. (Actually, I think it was October.) I usually go three times a year but of course in 2020 I didn’t go at all, what with isolating and barbers being closed during lockdown and so on, so my hair is longer now than it was in 1979 when I looked like Jason King, moustache and all.

Then, however, my hair was thick, almost luxuriant, and dark brown, whereas now it’s mottled grey, thin and wispy and the lightest movement of air can blow a single strand so that it tickles across my face. It’s been obvious for some time and I’m constantly having to brush a strand or two to one side – when I’m awake – but of course that’s not what you think about when, in the depths of the night, you are startled out of sleep by what feels like a tiny creature scuttling across your face.

Yet another of the totally unexpected effects of eleven months of isolation!

Who’d a thunk it?

Burns Night Supper. Another regular job gone the way of all flesh thanks to the virus.

For years now I have “addressed the haggis” at the Burns Night Supper of Jarrow Choral Society, a concert of Scottish choral music accompanied by the traditional meal of haggis, neeps and tatties, followed by a bit of Scottish country dancing.

Halfway through the evening I would stand before the assembled diners and the haggis would be piped in (a recording, no live piper known to the members). It would be held on a platter before me and I would address it in the words of the famous Burns poem. Then I would plunge the knife – not a dirk, unfortunately; just an ordinary kitchen knife – and it would be carried off to the kitchen and, table by table, the diners would line up at the hatch to collect their plate of Scottish joy.

They always made too much, so there were always seconds, and guess who was first in the queue for them!

Not that tonight is Burns Night, of course. That’s next Monday, but for the participants, the Choral Society and their guests, Saturday is a more convenient night.

Cultural Appropriation? Come on! Here in the North East we’re closer to Scotland than we are to London, Birmingham or even Manchester, and I, for one, feel that I have more in common with the Scots than with them! I remember, more than 25 years ago, being told by the Sergeant of the Guard at Edinburgh Castle. “You Geordies. You’re honorary Scots!” and that pleased me then and continues to please me now.

Even though I’m a Mackem and not a Geordie!

So, here’s tae the haggis!

Now you are one of the select few.

To this I am reduced.

Ten days ago (or thereabouts, my sense of time has got pretty well messed up) I got a dose of food poisoning – the cherry on the icing on the cake of eleven months of isolation.

At least it felt like food poisoning. It could have been gastro-enteritis. I don’t know. What I do know is that I felt like death.

It wasn’t prostrating so much as debilitating. My energy levels had been low for some time but for the last god knows how many days they have been negligible. I’ve spent 15/16 hours a day in bed and 90% of the rest was spent just sitting.

After a few days I did start eating again: milk puddings, the blandest of bland soups, and biscuits. Biscuits – not exactly a world of exciting flavours! And such names! “Rich Tea” – so tasty they make Malted Milk feel full of eastern promise.

But of course, as Shakespeare told us in Hamlet, “When sorrows come, they come not single spies, but in battalions.” First it was Covid and isolation (337 days and counting), then it was the stomach thing, then my arthritic knee started playing up and now, when the rest are settling down (although not the Covid, obviously), this morning I woke up with a cold sore, the second in a month.

But that’s not all. Oh no. Walking even the shortest distance makes my hips and lower back ache, so my struggle to maintain some sort of fitness in lockdown has been reset to zero.

Do I have the energy to restart the whole getting fit programme? Do I even want to?

I dread to think!

“When sorrows come, they come not single spies, but in battalions.”

First I had a stomach upset, now I’m having problems with my eyes. They’re sore, itchy, tired, dry.

Obviously, dry heat from the central heating, little or no fresh air and far too much time staring at a computer screen.

“What to do?” we ask ourselves.

So, see you when I see you – probably through red, itchy, swollen eyes.

God, I have hated this month! It’s been by far the worst since the pandemic began, worse even than those first weeks when I had that dreadful debilitating cold which meant I missed so many things that I was so looking forward to.

I suppose the self-isolation was something novel, something almost exciting in those innocent days a year ago but as this eleventh month of isolation has progressed, as I’ve got nearer to the anniversary of my incarceration (for that’s what it feels like now), any positivity has waned – even the thought of the second vaccination within in a month or two fails to excite.

And as my hatred has grown, so my temper has shortened and in thought and even on occasion in word I have spat venom in all directions. I have tried to keep it in-house as it were and it has only spilt into the pages of this journal. Face to face contacts have only have only been with a very (extremely – three people plus delivery drivers) limited number of people – people, in fact, who are helping me – so in those contacts my temper has been kept under tight rein.

It’s been a mixed blessing that door-to-door salespeople have been few and far between during the pandemic – none at all so far in 2021 – for, although it’s good not to have the annoyance they cause, I would dearly have loved the opportunity to unload some bile on them. It would have been such a pleasure. Even my October bright spot, the lovely young lady of Day 237, would not have been pleasantly received this month!

And as for writing: three BTG news stories in the whole month, seven whinging journal entries – under 2000 words, in 28 days! – and nothing creative. Nothing at all. A big fat zero.

I’d have had a more productive month if I’d slept through every miserable bloody second.

Elton John is livid: Frost's lack of responsibility for our UK music industry