Cycling is a way of being considerate to your community, as it reduces pollution. And this is linked to another current issue: there are times when pedestrians and road users would be well advised to wear facial shields such as masks. 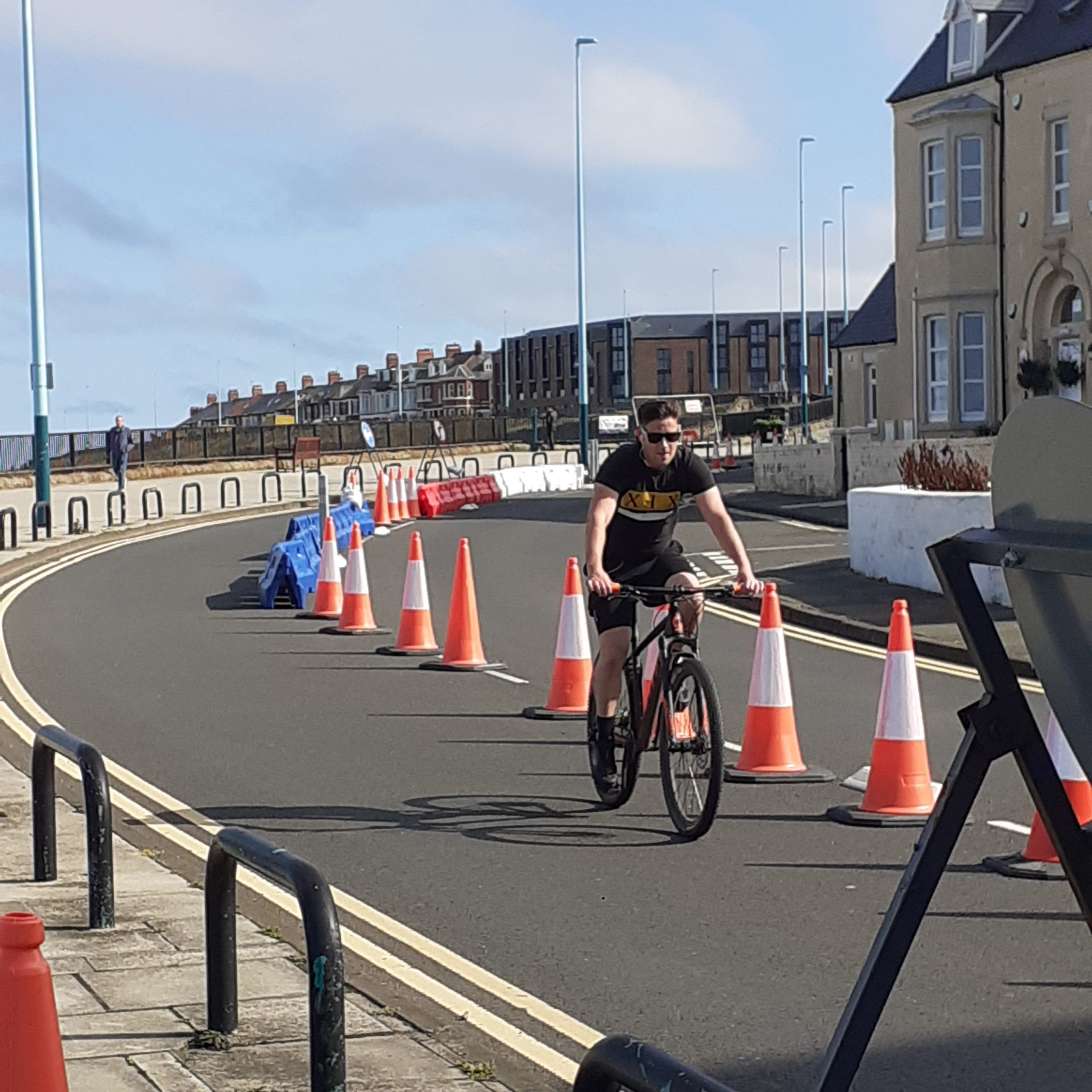 It’s 7am. Running from the Spanish city, Whitley Bay to the Clocktower at the end of Front Street, Tynemouth, is a temporary cycle lane: it occupies half the road. At this time in the morning, as I overlook the sea, there are swimmers and surfers in abundance – groups of people in the open air, exercising on the beach.

There are young children and their families happy just to ride bikes together along the seaside route, taking their chance to enjoy the extra space and freedom. There are all kinds of folk from every generation, not all are dressed in lycra, with pain on their faces, riding at full pelt.

The cycle lane is a much-needed development, as cycling allows you to consider more of what you see and to socialise more. Take the DFDS ferry to Holland however, and you’ll enter a country where bikes have equal prominence with cars in suburbia such as this, where cycle lanes abound and the highway code gives them greater protection.

Cycling is a way of being considerate to your community, as it reduces pollution. And this is linked to another current issue: there are times when pedestrians and road users would be well advised to wear facial shields such as masks. These would stop not just help to protect us from Covid-19 but also some virus-sized microparticles coming from diesel engines, a major cause of respiratory problems.

The roads are busier now; cycling can help reduce that, but just as this cycle lane from the Spanish city has a start and an end, to actually get there you are either a local and start from your home or you have to endure the open roads to get there. It offers so much opportunity for safe enjoyment of our wonderful coastline. Yet sometimes these special cycle routes create other problems by acting as a special amenity which attracts cars carrying bikes to the start of the route.

The problematic, fragmented nature of our cycle lanes is embodied by the rite of passage that anyone takes when they try to cycle into Newcastle from the coast. At peak times, I’ve seen safer bull runs in Pamplona! The problem only becomes greater with increased local traffic, as we saw since the start of lockdown, and as new housing estates accumulate with little infrastructure to support the extra residents.

There is a point to providing this infrastructure: it’s a sense of belonging to a community which begins with recognising people; this is not so easily achieved as cars speed by. I believe we could start with better integration of safer cycling routes to help children get to and from school by bike without major hazards. To give children greater independence means they can learn more about where they live and their community. It is a step towards their eventual independence from parents, and hopefully also from polluting vehicles.

The Whitley Bay cycle lane is an innovative idea from North Tyneside Council, this should be applauded; this experiment will hopefully produce other initiatives to help increase people’s means of healthy transport and exercise. It could be further enhanced in schools and with advertising locally, perhaps through cycle shows and races, and with workshops to help people mend and ride their bikes.

However, as with the cycle lanes, policy needs to be joined up: a £50 government voucher scheme is of no use if there are no skilled people to carry out the work safely. Equally, there are no MOTs or insurance for a bike; it’s a safety lottery. And cyclists need equipment: I tried to buy cycle tyres and rang around North Tyneside cycle shops. There were hardly any in stock or just expensive brands left, demand is clearly high. The move to internet buying has also resulted in the closure of cycle shops since the start of this 21st century.

Where to start? People in their third age are perhaps the best equipped to ensure there is a continuity of knowledge about cycling. When they were born, fewer people had cars – and practical engineering skills were taught more widely in schools, so they acquired relevant knowledge.

There are some fantastic places to cycle in the North East and more time has to be spent making change happen: effectively, well-coordinated and with financial backing through planning and education.