A North East dad, a firefighter with TWFRS, brought in his 4 year old daughter to work. Adalyn was inspired by his female boss, Jade Makarski. 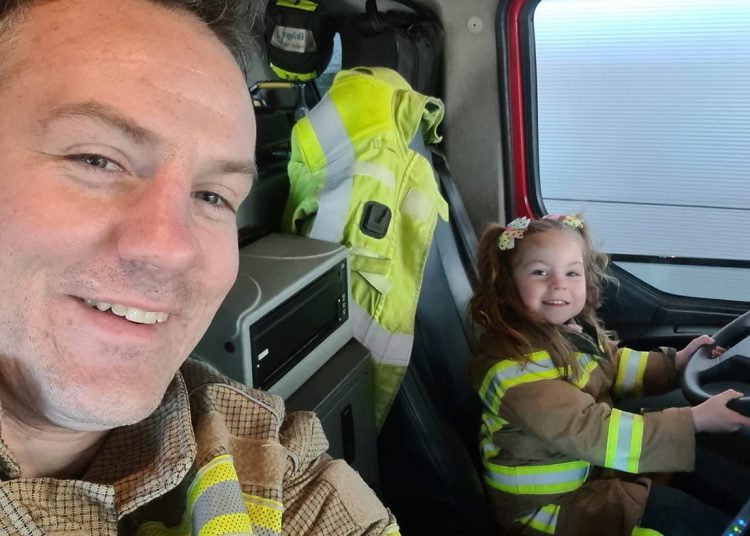 A dedicated father and firefighter praised the importance of female role models after he brought his daughter to work – and she was inspired by his female boss. Firefighter Luke Watson this week brought his daughter Adalyn to his office with a special tour of Farringdon Community Fire Station, part of Tyne and Wear Fire and Rescue Service.

He wanted to teach her more about his job and the four-year-old had an opportunity to try on some kit, get into an appliance and watch her dad in action. Little Adalyn was amazed finally meet the male and female firefighters working alongside daddy Luke after hearing all his great stories.

Manager Jade Makarski talked with the youngster about what drills her dad was performing.

Inspirational leadership at Tyne and Wear Fire and Rescue Service

Now her father has revealed Adalyn has not stopped talking about her visit and now only talks about wanting to follow in their footsteps.

Luke, who lives in Horden in County Durham, said:

“Adalyn has been curious about my role since I started with the Service around 18 months ago so I knew I was going have to get her in and show her the ropes sometime.

“She was welcomed with open arms by the watch which was great and her and WM Makarski sat together and instructed the watch on how to perform their drills!”

“She was so excited to finally meet the women on the watch that I’ve been working with and I think that has really opened her eyes at a young age.

“Adalyn had such a wonderful day and got to spend time with great role models. For me it just shows why we need more women in senior roles in the Service.”

WM Makarski, who was running the training exercise that morning, said she is proud to be a role model for the future generation of firefighters.

“The watch were thrilled to be able to show Adalyn their workplace and perform drills for their “Little Gaffer”. She was a delight to be around and a real credit to Luke and his partner.

“You never know who you’re going to inspire in this role and I’m glad that me and my watch got to spend the morning with Adalyn showing her that she can do anything when she grows up.

“Interactions like this underline the importance of having a diverse workforce and I hope other women consider a career as a firefighter because different people bring different ideas and that is exactly what we need.”

Recruitment for firefighters has recently closed after more than 1,200 people submitted an application to join the Service prior to Sunday’s deadline. However, the service says they will be recruiting hundreds more firefighters in the coming years and called on anyone interested in a career with them to visit the TWFRS website.