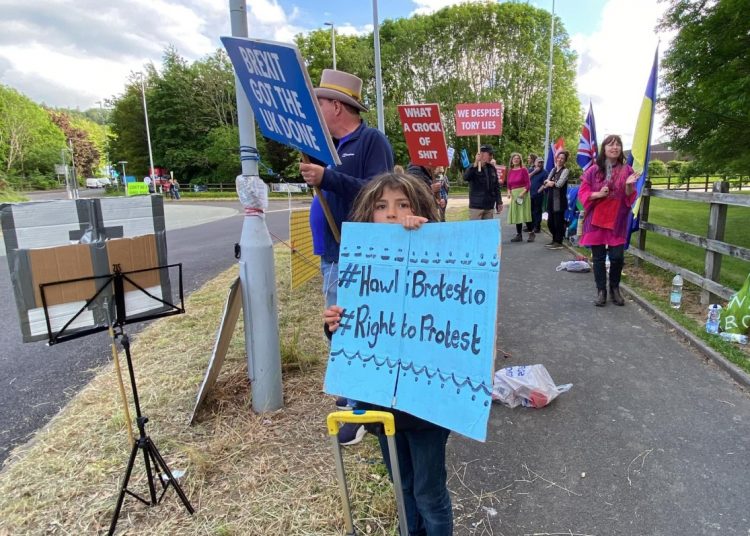 The Welsh Conservative Party conference was held in Newtown, Powys, over 21 and 22 May. Steve Bray and SODEM (Stand of Defiance European Movement) decided to pay a visit.

Wales is not known as a Tory heartland. Even appreciating this, I found it heartening to see that the massed ranks of their committed Welsh membership could barely fill a small to medium-sized wedding reception venue for their Friday evening dinner. A single coach was able to ferry the vast majority of them from the conference venue to the evening event.

Steve Bray, Mr Stop Brexit of SODEM got wind of this event remarkably far in advance. This allowed for the planning of a little SODEM tour (we’ve previously troubled party conferences in recent years, and not just the Conservative conferences). Rooms were booked at the venue hosting the Friday evening event, and a group of us arrived that afternoon ready for their evening dinner.

We were in the car on the way from London when it was announced that Boris Johnson himself would be making an appearance at the conference, but, frustratingly, we weren’t there yet, so we missed him, despite a last minute detour to intercept his photo op at a honey manufacturers. We arrived at the factory perhaps only 20 minutes after he’d left. We’d missed “Big Dog” himself, but we knew we would yet be able to picket for Rishi Sunak’s appearance at the conference on the evening of the following day, Saturday. But, first thing’s first, and there was the Friday evening event for the Tory faithful to attend to, so we carried on to the hotel and booked in.

The venue was a converted and charming country manor, part of which was 16th century with successive later additions as you often find with such buildings. At the back there was what appeared to be the most recent addition, built in recent decades, of a function room such as you might expect would host a wedding reception, and that was, indeed, a key part of the business.

You know the sort of thing, you’ve likely been in one at some point – it possibly sits about 150 people at a dozen or so tables. After a little recce, we noted with quiet delight that the function room was accessible not just through the main building, but from the side of the property, and also from the far end, where there were a set of French doors, which we might readily assume would be open for ventilation on what was a fair spring evening. It would not, therefore, be necessary for us to enter from the main body of the hotel. Which was handy.

About 90 minutes later it was evident that the Tory reception down the corridor was progressing happily, the delegates having accessed the function room from the side of the building, and so without passing us. Probably as well – it was entirely possible that one or two of the parliamentary party might have recognized us from Westminster.

As the sun was setting, a little after 8, we did this –

In the palaver, Steve sustained a small injury to his hand, and the microphone was taken. As you’ll note in the video, Steve told the staff that they’d have to call the police before we’d leave, so they did call the police, and whilst we were waiting for them one of the delegates came out to talk to us, to get us to leave. We weren’t shifting without the return of our property. After some back and forth it was eventually returned.

Unsurprisingly, the hotel did then tell us to leave whether we had room bookings or not. The Police, when they were arrived, were very obliging and entirely reasonable, and took us to a Premiere Inn, and that was where we stayed the night. However, as we were taken there in the back of a pair of police vans, Steve couldn’t resist asking Sylvia, one of the team, to take a photo. When he then published this photo to Twitter there were various types of the Twittersphere that declared he was under arrest. But we were not arrested. As one police officer said – “you’ve a right to protest”.

The police did take us a fair way off, mind – 50 miles in fact. But that was no impediment to our making our way to the conference venue the following morning.

Unusually, we weren’t the first protestors on the scene. Elizabeth Blanche (Liz) was already there. We put some of our banners up, and Steve played the music as he often does, most notably the “Bye Bye Boris” track that we’d used the night before, and which we have played regularly outside parliament since the new year.

It was quiet that morning, SODEM, Liz, and a couple of other people who joined us here and there. But later in the afternoon many more people started arriving, with banners highlighting the cost of living crisis and environmental issues, as well as a broader anti-Tory agenda.

One thing we did note was that the coach that was used by the delegates arrived about three quarters full, and that’s fair enough, but it then made three further trips, and on each of those trips when it came back to the venue there were only a handful of people on it. A hundred-seater coach sent to pick up a handful of people. So much for the Conservatives and the environment.

We all of us made sure the Tory faithful knew what a good proportion of the country think of them, particularly Rishi Sunak who swept past us with his security. He didn’t seem at all inclined to talk.

This will give you a taste of it –

A profitable excursion, bringing the dissatisfaction and dissent of the British people home to those responsible for it.