“Whilst I watch the clock tick, eagerly willing for 8 o’clock to come, some patients watch it not knowing which hour will be their last.” 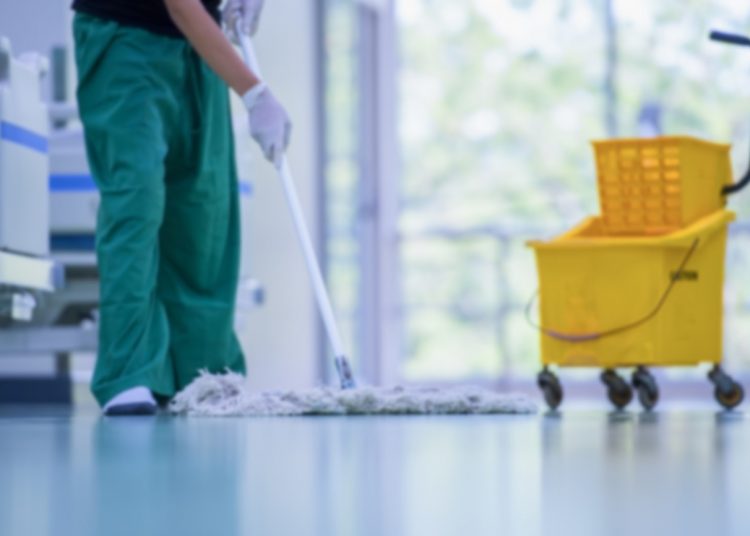 Coffee and chlorine, easily the two most prominent yet strangely comforting smells you’ll find in any hospital. During coronavirus, this was no different; your nose just burnt a little more from the chlorine, and the cheap instant coffee you relied on to refuel lingered just that little bit longer on your tongue.

The responsibility of maintaining cleanliness

I had been working as a Domestic Assistant for just over a year and it’s undoubtedly been the most challenging, formative and rewarding experience of my young working life. A Domestic Assistant, or Domestic for short, ensures that both clinical and non-clinical areas in a hospital remain clean, organised and free of contamination. During Covid-19, in which an infectious and dangerous virus was sweeping the nation at an alarming rate, this responsibility of maintaining cleanliness felt pretty immense. The difference between wiping that door handle or not wiping that door handle could be the action or inaction that causes an outbreak on a ward, and for wards full of already vulnerable patients, this decision could easily be fatal. Unfortunately, this level of responsibility doesn’t quite match the level of pay. People often regard cleaning as an unskilled and unrewarding task, not particularly deserving of a decent wage. However, the amount of precision and pride my colleagues and I take in our work is unmatched by any other industry I’ve worked in.

An emotionally charged environment and relying on intuition

Having previously only worked in hospitality or retail, switching to an environment as emotionally charged as a hospital, particularly during the one of the greatest health crises the modern world has ever seen, was an incredibly overwhelming experience. All those work-friendly mannerisms and go-to conversation starters you internalise in retail and hospitality environments just aren’t transferable when you become a domestic. The main reason being that a distinguishing and often isolating part of being a domestic is that you never really know what’s going on with individual patients, you’re out of the loop, so to speak. All other members of staff who make up a ward have access to patients’ medical situations: who they are, why they’re here, whether they’re improving or deteriorating. When you’re a domestic, you aren’t qualified to know any of that sensitive information, so you really have to rely on your intuition skills when interacting with patients, do you take a chirpy tone or a neutral one when you ask if they’d like their bins changing?

For example, you can’t always walk into a patient’s room with a smile on your face and start a conversation with “You alright?” as you would in a bar because has that patient just recently been diagnosed with a terminal illness? Have they been told they might not ever walk again? Or are they simply in for a routine and low-risk procedure? As a domestic, you’ve got to really engage with your intuition skills and decide in a split-second whether such a question is appropriate. If you say nothing to a patient, you risk coming across as rude and if you say the wrong thing, you risk crossing a boundary or distressing them. As a result of this unawareness, there exists a liminal space, an unbridgeable personal distance, if you will, between patients and us.

I often feel like someone with a backstage pass at a big event or a member of the behind the scenes crew, there to clean and maintain organisation without disturbing the flow of the ward. That being said, I’m not trying to paint domestics as outcasts or victims of some brutal workplace hierarchy, in many ways it’s better to be blissfully unaware, what we don’t know can’t hurt us, right? We don’t carry quite the same emotional burden that other healthcare staff do, we’re on the sidelines of the emotional turmoil. And if I’m completely honest, most of us are very comfortable with working quietly. There’s an incredible level of catharsis to be found in cleaning. However, there is another more negative side to the anonymity we possess as domestics, which I’ll discuss later.

I love the job but…

All in all, I love the job. I enjoy sticking to a clear routine and mentally ticking off all the jobs required in my assigned areas. I leave every shift feeling like I’ve made a difference, feeling like without my input, the hospital wouldn’t be running as smoothly, like a small but important cog in a giant lifesaving machine. Feeling like you’re of value did (and still does) provide me with a huge level of mental contentment, which during lockdown was my saving grace. However, I most definitely could not do this job forever, it takes a certain calibre of person to be capable of this. You’ve got to have an incredible level of dedication, resilience and patience.

Unfortunately, you’ve also got to be prepared to encounter a substantial level of disrespect. I never knew what being invisible felt like until I became a cleaner. Patients and staff alike quite literally look straight through you sometimes. Of course this isn’t the majority, but it’s a number significant enough to make you feel unappreciated and undervalued. The bulk of this disrespect is felt in the form of microaggressions: someone not holding a door for you, not moving out of the way for you when you’re pushing a trolley of rubbish, people having a conversation over you, and not even looking up at you when you ask a question, along with ward staff still asking you your name after you’ve worked there 5 days a week for 6 months. As much as I joke about feeling like a background character, I sometimes feel like if the hospital were to be turned into a film, domestics wouldn’t even make the credits. If I weren’t as outgoing as I am, I could easily do a 13 hour shift in which I only have one or two interactions with other people.

I implore anyone reading this to please take the time to say hello or start up a conversation with your workplace’s auxiliary staff, such as domestics and maintenance staff, because we can often feel quite lonely.

Working in a hospital is not all doom and gloom. For every tale tainted with tragedy, there are at least twice the number of heartwarming recovery stories. This was certainly the case during Covid-19 as well. Those who had stayed on the ward a long time were clapped off by a parade of healthcare workers, united by the joy of seeing someone who weeks ago had been on death’s door taking their first tentative footsteps on the road to recovery.

As distanced as us domestics are from the nitty-gritty details of each individual patient, we definitely share the ward-wide joy in seeing people get better. It’s often the little things that we notice the most: seeing a patient being tube-fed one week, then seeing them enjoy soft foods such as a toffee yogurt (an NHS classic) the next, or seeing an unconscious patient’s hand being gripped desperately by a family member one week, then that same patient being awake and talking to loved one a week later.

Life’s fragility is as much as a gift to behold as it is a curse; there is no such thing as fair or unfair in hospitals, they operate purely on the principles of Mother Nature’s cruel rulebook. Once you accept this fact, seeing what you see and hearing what you hear becomes a lot more manageable to emotionally process. As I’ve said, domestics are not usually in the depths of the action, we are more detached than those providing patients with 24hr care, but we’re not oblivious to what’s going on, we just absorb it all on a more subconscious level. Therefore, every member of staff in a hospital must grow accustomed to being surrounded by emotional distress, whether they’re a domestic doing the bins, or a surgeon fixing limbs, a nurse dressing a wound on someone’s head, or a porter pushing around the bodies of the dead. We are a team, and our strength is our diversity.

The most invaluable lesson I’ve learnt from working in a hospital is perspective. In the midst of Covid-19, you develop a newfound appreciation for all the little things you usually take for granted and you squeeze your loved ones a little tighter each night. Some shifts feel never-ending, and it often feels as though time’s not passing at all, but in the end you get the privilege of going home each night whereas those patients don’t. Whilst I watch the clock tick, eagerly willing for 8 o’clock to come, some patients watch it not knowing which hour will be their last.

This article was first published in TITL.magazine