Durham is the Big Meeting and the Gala. Both sides of it are vital.  Next year and every year I can, I’ll be there. We’re so lucky it still exists and so long as civilisation has some influence here, always will. 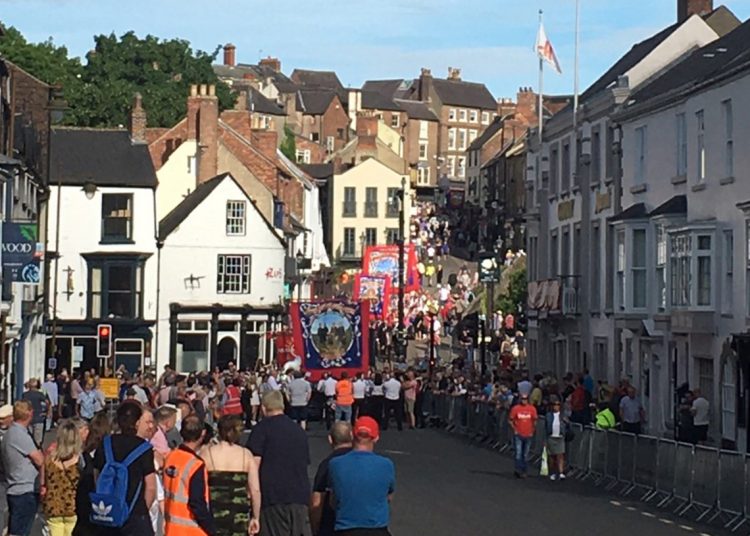 My mam told me that her first memory of Durham Big Meeting (Durham Miners Gala) was sitting on a large worm in her new dress aged four in the late 1940s. My first memory of it was playing under the geodesic wooden stage aged 12, where The Prime Minister, James Callaghan, was speaking at the time to my total lack of attention.

Security and people at Durham were tolerant; my Aunty Peggy from Fence Houses (one of those amazing Co. Durham villages which changed the world) and a pitman’s daughter, used to say “you can have anything you like, as long as you get it yourself”. She and her sisters including my beloved gran, taught me how to drink Pernod, how to play poker and, in a world where the pitmen died early, (the only two male survivors into “old age” were Jack, a pharmacist and Fred, a survivor of a crashed Lancaster over Schweinfurt, who evaded capture with the aid of the Resistance – hence the Pernod), the value of education, humour and family mining solidarity.

The dual necessities of pleasure-seeking in the sunshine, but then having to do the most dangerous job in the world seemed as inevitable as night and day. One is the pleasures of the Gala; another deals with deadly issues at “The Big Meeting”. They come as a package, two sides of the same coin and each as valuable as each other. My grandfather, after whom I’m named, a rescue man based in Benwell, next door to today’s West End Foodbank, used to have two sayings. They are engraved on our family’s heart and soul. “Heep a’had” and “Leave no one behind”. It was quite literally, as a hero of labour, who went underground after an explosion, his job. But he loved sport, music, laughter, his family and both the joy of the Gala and the political content of The Big Meeting.

The atmosphere at the Gala

The experience of the Gala is festive. It allows everyone in from “trendy Bill from Flint Hill who wants to meet Stephanie from Stanley”, the 8.30am cans, the shirtless games of football in the sun as blackcurrant cider is swigged by interested appraising onlookers coexist with those whose concern is purely  political. The side of the field nearest the stage full of serious messaged t-shirts (Trade Union and Alcohol Committee/I still hate Thatcher etc), the badges of defiance or identity introducing “a friend of yours that you haven’t met yet” are shown, leftist newspapers are offered and very occasionally sold, organisations you’ve never heard of and others, have stalls like that band from 1978 you forgot were still playing – and there they are. People talk to each other and smile. They get drunk and sing. They fight and they snog, they argue and they hug. They plan for better days and they remember their lessons.

This year’s Gala was special for a few reasons. It was happening, for one; Covid wasn’t stopping it (although…I’m not even going there); secondly, it was sunny and, more importantly, everyone knew that it was going to be sunny and dressed accordingly; third, there was after many years, there was a whiff of victory in the air. Johnson was doomed, the enemy was in disarray and the key workers speaking from the stage included the celebrated Mick Lynch with his ability to confound the media and government with his calm power, and the uncle of the band Lankum that we’ve put on at the Irish Centre. I’ve seen a lot of celebratory crowds effervescing with victory this season at St. James Park and this felt like pre-match at Arsenal – when we all knew they were beaten before the football even took place. The Durham crowd felt power may be coming back to them; that it’s theirs to lose and maybe the discipline that responsibility can bring. All the same the roadies should have put a radio mic on the band when they played “Gressford” at the start.

Power in the union

The greatest spectacle there in my opinion are the banners and the brass bands. If there is still power in the union, you really feel it when they thunder past. The march down the hill to the racecourse as they pause on Old Elvet is something that nothing should ever alter. That they were playing a theme from the Spice Girls (I’m serious and I swear on my mother’s life and I have a video that it’s true) only slightly detracted from the spectacle. I resolved that next year, I’d watch more of it and hope that it’s not Steppes; and I don’t know whose banner it was… But that was at 8.30am and, aside from a 20 minute break off the stall for a cup of tea and a bacon sandwich to see a speech, I was in the DMA Tent until 4pm. Sweating.

In the tent with Fans Supporting Foodbanks

There, the lads from Barnsley sold miners’ plates (I got one showing all the pits in Durham for my Mam), badges and posters, the stall showing the wonderful tradition of the LBGT mutual aid for the miners as shown in the film “Pride” sold me a “Perverts and Pits” T-shirt for a tenner, the Labour PR Campaign tolerated my opposing opinion with friendship, Tony was there from Newcastle Unites, Ben from the Durham Bookshop, the lovely Sunderland fan doing his Coals to Goals campaign and some “interesting Labour Party Marxists” (YCL I think..but I’m not MI5 so how would I know).

I set up the Fans Supporting Foodbanks stall with Jemima from the West End Foodbank showing the NUFC Fans Foodbank “Dignity” banner that debuted at an anti-fascist demo against Pegida in Newcastle in 2016. We had a couple of collection buckets since we had nothing to “sell” and the “Ruhrpott” flag from our international comrades from FC Schalke who attended the first Foodbank matchday collection in Newcastle in 2017. Most importantly, we had the new statistics that the Foodbank issued 2006 packages of food in June 2022 – more than ever before, more than the worst of Covid, when it was 1800 of so. That the problem is getting worse and the people need coordination of help now and through this approaching winter.

We were next to the Samaritans stall and opposite the Cats Protection League who packed up early. The highlight for me though was meeting a wonderful amazing woman at the International Brigade Memorial Trust who had the book about Tom Wintringham (The Last English Revolutionary) and showed me “her man” pictured on the right on the front cover, next to their banner… now and again you meet history and gape and swear undying allegiance. She cried a lot and I shed a tear…oh man! The lesson being that defeat is never final when your cause is just and we’ll get there in the end. Nee Paseran.

We talked to the lovely people, met some great friends of ours up from Liverpool who founded the Football Foodbank movement (Dave Kelly and Ian Byrne MP  and the lads), the Scottish fellers who are setting up football foodbanks there and everyone else and his aunty. My Dad’s pal Norman came over for a sit down, a can and some sun cream and we headed up the hill for a bevy or two to discuss the perfectibility or otherwise of humankind, like you do, and about 7pm I headed up that rotten hill to the station carrying my banners and the collection buckets. A bloke put another 15p in them on the 62 bus on the way back to Heaton as I wended my way from the Central Station to the Irish Centre (mobbed with Rugby League drunks for Magic Weekend) and then to the blissfully quiet alley next to the Tyneside Cinema where I forgot the No1 Bus stop was knackered due to Pilgrim Street being bollixed. The kind of day that you try to remember forever could never be affected, even by Newcastle City Council road closures.

Durham is the Big Meeting and the Gala. Both sides of it are vital.  Next year and every year I can, I’ll be there. We’re so lucky it still exists and so long as civilisation has some influence here, always will. Glory to the memory of the International Brigade.