Julie Ward reports on the little big meetings, the Durham Miners Gala, our proud and long history and the crass uncaring PM's comments. 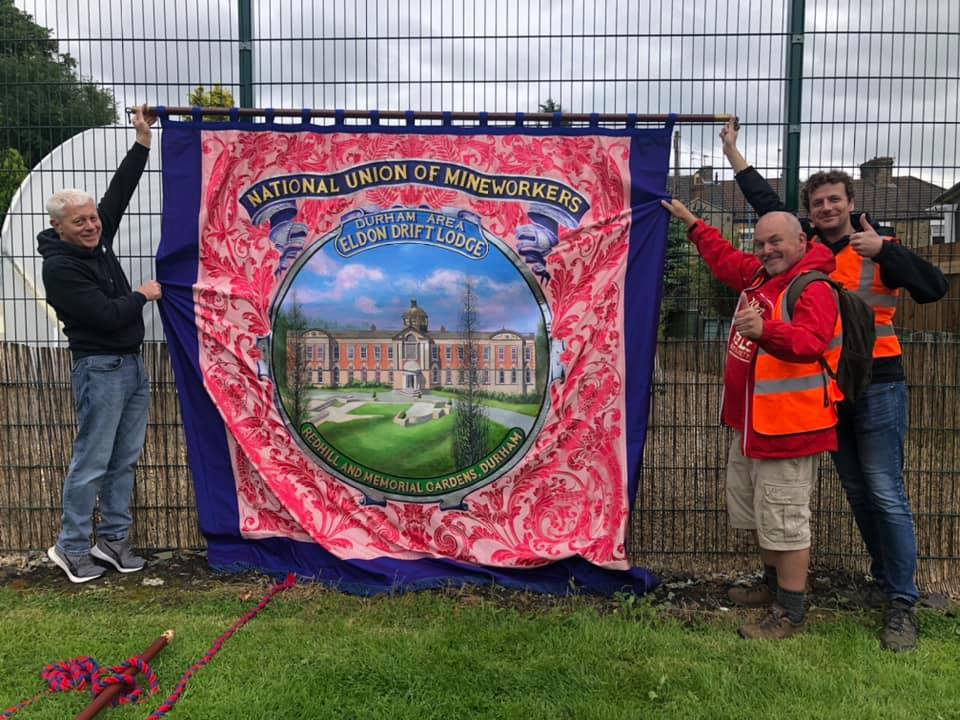 Boris Johnson’s crass comments praising Margaret Thatcher for closing the pits in the 1980s and wrongly attributing her with green credentials have been roundly condemned by leading figures connected to the Durham Miners’ Gala.

It is the second year running that Gala organisers have reluctantly taken the decision to cancel the iconic ‘Big Meeting’ due to Covid-19 health and safety concerns. However, with the support of various grassroots community organisations such as Shildon Heritage Alliance, the County is instead playing host to lots of ‘Little Big Meetings’ with local banners, brass bands, political speeches, family entertainment, and more than a nod to the coal-mining heritage that shaped the fierce community spirit as well as the local landscape.

Speaking at the ‘Little Big Meeting’ in Timothy Hackworth Park in Shildon on Saturday August 7th, Alan Mardghum, Secretary of Durham Miners Association, didn’t mince his words. He described Johnson’s depiction of Thatcher as an eco-warrior as “absolute balderdash”, pointing to the continued import of cheap coal from countries where child and slave labour was and still is rife. Alan worked as a miner at Wearmouth Colliery from 1977 until its closure in 1993, and then became a welfare benefits advice worker so he knows more than most about the school of hard knocks.

Speaking to me after Saturday’s event, Alan, said,

“It is vitally important to let people know that although the Tories annihilated the coal industry and did unspeakable damage to our communities, those communities are fighting back and the event at Shildon demonstrated that very well indeed… This was the latest in a long line of insensitive remarks made by the Prime Minister which demonstrated that he cares little, if at all, about the plight of working class communities.”

The truth about Thatcher and the Tory governments

In a letter to the Northern Echo, the former Labour MP for Blaydon, Dave Anderson, wrote, “We all know the truth that the Thatcher and Major governments decided to decimate the industry in order to destroy the trade union movement in this country. In doing so they closed down the industry that was leading the world in clean coal technology. That technology could have provided a bridge between a carbon powered world and a green powered one.”

Standing up for our heritage

Anderson who is also a former miner and now chairs the Marras (otherwise known as the Friends of Durham Miners’ Gala) was MC at the Shildon event. Speaking afterwards he said, “The wide variety of speakers, performers and exhibitions made up a great event at a time when we are just beginning to move out of the pandemic. It was very much in the spirit of the Big Meeting and a stepping stone to next year’s return in Durham… Everyone was chuffed with the event and it was great to see us all together again standing up for our heritage and our hopes for the future.”

Also speaking from the podium was local Labour Councillor Samantha Townsend who welcomed visitors to Shildon. Reflecting on the event she said, “The banner parade was very emotional… During the pandemic we have all been isolated, and it’s been a perfect breeding ground for this government’s divide and rule tactics. We need events like today to remind us that we have more in common than that which divides us and that in communities we have real strength.”

It is a game to the Prime Minister

Samantha also touched on Boris Johnson and the Thatcher legacy.

“The prime minister has curated a public persona. He’s won elections on his charisma and on being able to ‘reinvent’ the Conservative party as somehow detached from Thatcher and detached from austerity… This is a game to him, but to us, on the sharp end of austerity it’s life and death.”

Opportunities to get involved

Other speakers included Jane Hackworth-Young, a direct descendant of the locomotive engineer Timothy Hackworth, a contemporary of George Stephenson who became the first superintendent of the Stockton to Darlington Railway and also established a world-class engineering shop in Shildon. Jane is Vice-President of the Friends of the Stockton and Darlington Railway who along with the Weardale Railway Trust and Locomotion set up information stalls at the event and are always looking for volunteers.

The Women’s Banner Group were in evidence and will be running activities on Saturday 21 August at Redhills, the Durham Miners Hall in Durham City as part of this summer’s Little Big Meetings. Other activities in Shildon included the opportunity to block print inspirational political slogans with members of the Artists Union and a vegetable and plant give away organised by local food bank Shildon Alive!

A long history of solidarity at Durham Miners Gala

The Durham Miners Gala has a long history of solidarity with other grassroots campaigns. These include Hillsborough, the Shrewsbury Pickets, and the Orgreave Truth and Justice Campaign. International solidarity also features with invitations to comrades from other struggles such as the Chilean miners rescued following the 2010 Copiapó mining accident and Kurdish Freedom for Öcalan campaign.

The Little Big Meeting at Shildon gave a warm welcome to Yvette Williams from the Justice 4 Grenfell Campaign who recognised that although the communities in Durham and London might seem very different they both shared a huge sense of humanity in the way they cared for ordinary people. Veteran activist, Tosh MacDonald, a former President of ASLEF, gave a rousing speech in praise of the working class who power our economy and have been at the forefront of the fight against the pandemic.

Alan informed the crowds that next year’s Big Meeting will be dedicated to all the keyworkers who have kept the country functioning through the biggest crisis the country has endured since the Second World War, despite the incompetence of the government in handling the pandemic. And he announced an exciting future cultural exchange project with the Notting Hill Carnival.

Music at the Gala

Music has always been a feature of the Gala and this year is no exception. In Shildon the crowds were treated to Brasilian rhythms from Crook-based Runaway Samba, a Jack Drum Arts project, and singer-songwriter Sam Slatcher  whose recent offerings include a song in praise of the heroic RNLI written in response to the offensive comments made by Nigel Farage.

The only people who were noticeable by their absence were the local Conservative councillors and MP. But when your party presided over the destruction of whole communities and your leader insults your constituents, photo opportunities are probably a bit limited. You can find out about future Little Big Meetings here.