The significance of Easter in the history of Irish independence 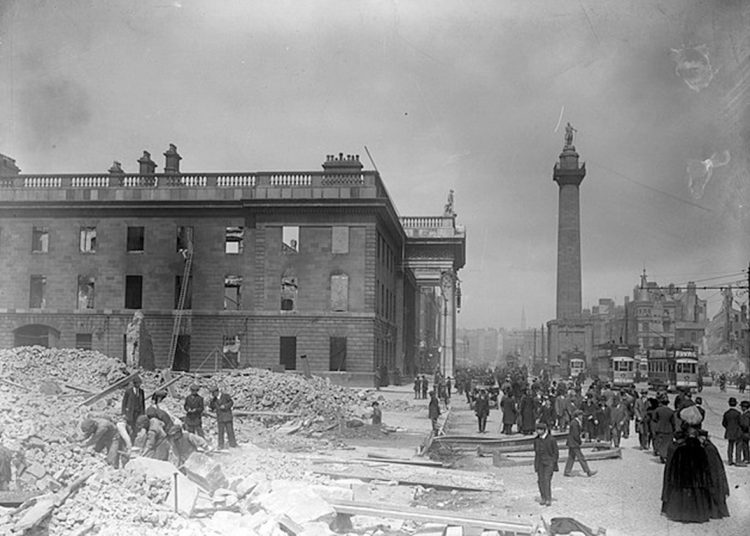 Easter is a holiday festival that historically resonates in Ireland, from 1916 to the present day. It was on 18 April 1949 that Southern Ireland finally became a republic. It was also that Easter Monday that saw the Republic arrive at the final stroke of the midnight bell when I emerged into the world a couple of hours later. This was to my Irish dad’s delight – though probably not immediately to my mum’s.

So, was this a culmination of a journey that started on Easter Sunday 1916 when an unfamiliar flag was unfurled above the ornate portico of Dublin’s GPO Building on what was then Sackville Street?

Yes and no. The war of independence that followed in 1919 saw an Irish Free State proclaimed in 1921 after arduous negotiations in London, followed within months by a horrendous and bloody internecine civil war. This was a civil war that saw the first bullets fly on Easter Saturday 1922 – between those who accepted that Free State as a foundation for nationhood free from the shackles of a colonial relationship with Britain, and those who could not accept that the price of this was to live with what they saw a discriminatory, bigoted Unionist statelet in a truncated Ulster. They were right in their analysis, even if they lost the political and popular argument, and it took yet another Easter – Good Friday, 1998 – to, at least, cauterise that open running ulcer.

How does this concern the North East?  I’ll come to that in a later article, but first the potted accounts of those Easters…

Easter Monday, 1916 was a clear sunny day in Dublin. Not many were about that morning, for the events began whilst many were at Easter Mass. Dog walkers and strollers in the south Dublin suburb of Rathmines were perplexed by the spectacle of a score of uniformed men carrying antique looking rifles boarding a number 14 tram, and their commander ordering 20 single tickets to the city centre. By the afternoon, a large number of strategic buildings were in rebel hands and proclamations of the new Irish Republic were being posted up everywhere. The story from now on is a familiar one; six days of fighting against thousands of British troops left most of the city centre a smoking ruin, and saw the surrender of the rebels followed by the execution of 16 of the rising’s leaders.

1916 put militant republicanism, which hitherto had been based on a constitutional approach, back to centre stage and 1919 saw the resumption in the south of a protracted war of independence, a war which was ended by the brokering of an Anglo-Irish Treaty in 1921 and the acceptance of that by a majority in the Dail in early 1922. However, the fact that this treaty accepted the reality of a Unionist, protestant state in the NE was too much for many. In the early hours of Good Friday 1922 the civil war’s first bullets were fired when a pro-Treaty patrol in Donegal Town encountered ten anti-Treaty men getting ready to break into the Ulster and Belfast banks. A gun fight ensued with the Royal Irish Constabulary (RIC) in the local barracks getting involved. After some time, the anti-Treaty men withdrew.  (There were numerous bank robberies being carried out by anti-Treaty men around this time after the pro-Treaty army headquarters in Dublin started to withdraw funding to IRA units which had gone over to the anti-Treaty side.)

The civil war was the nadir of Ireland’s first few two years as a ‘free state’, pitting IRA comrade against comrade, brother against brother and splitting entire communities. The military leaders on both sides – the Free State’s Michael Collins and the Anti-Treaty IRA’s  Liam Lynch were both assassinated in the war, two deaths amongst some 4,500 on both side (among whom were many executed by firing squads after peremptory court hearings.)  The Civil War was won by the pro-treaty Free State forces, who benefited from substantial quantities of weapons provided by the British government. The conflict claimed more lives than the War of Independence that preceded it, and left Irish society divided and embittered for generations

And now to consider Easter Monday of 1949. As the Irish Times observed:

“The passing of the Republic of Ireland Act in 1948 had laid the foundation for the renaming of the State and the exit from the Commonwealth. The changes took effect on Easter Monday, 1949 – the 33rd anniversary of the Easter Rising.”

Radio Éireann marked the Republic’s official birth at a minute past midnight:

“These are the first moments of Easter Monday, April 18th, 1949. Since midnight, for the first time in history, international recognition has been accorded to the Republic of Ireland. Our listeners will join us in asking for God’s blessing on the Republic, and in praying that it will not be long until the sovereignty of the Republic extends over the whole of our national territory.”

It was that last sentence that was the rub.  Despite the hopes, Northern Ireland was not going away, and indeed at midnight martial law was imposed for 36 hours in the province leading to nationalist rioting in Derry, West Belfast and Newry. The seal was set for nearly a half century of violence and repression spelling out into the troubles from 1969 onwards,

It was to take yet another Easter event to check that bloodletting. This was the Good Friday Agreement (GFA) of 1998 involving the governments of Ireland, Northern Ireland, Great Britain and the armed fighters on both sides – the Provisional IRA and the various Ulster paramilitaries, an agreement which despite everything seems to have held fast for the past 24  years, and an agreement brokered and negotiated by a politician from our own region – Mo Mowlam. It’s here that I’ll pause before we examine the role the NE played in the Irish struggle for statehood in a follow up piece.

“Lawmakers can’t be lawbreakers”: a letter to a northern Conservative MP

"Lawmakers can't be lawbreakers": a letter to a northern Conservative MP