There is a play – in fact, there are, no doubt, many plays – to be written about England during the pandemic but writing something now would be a bit like ending Romeo and Juliet with the balcony scene. Sadly there is so much more to play out. 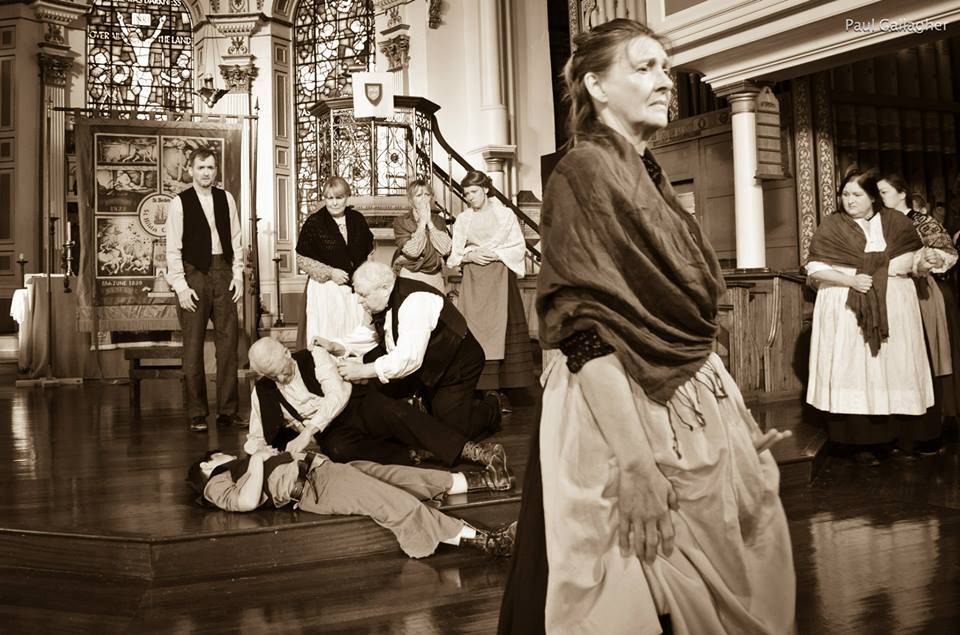 Cold in the Clay production: Part of the ensemble Photo by Paul Gallagher

All writers have their own ways of working and mine is to start with a character – storyline and plot come later. Even if it’s a play about a specific incident, like the story of the 1839 Hilda Pit Disaster in South Shields which was the subject of Cold in the Clay (commissioned from me by the Customs House, South Shields in 2014), I simply cannot get started until I have a character to provide a point of focus to build the play around.

Sometimes the character may not turn out to be central to the story. In Cold in the Clay, for example, it was the wife and daughter around whom the piece revolved; my initial character ended up dying in the first 15 minutes but he had served his purpose in giving me direction at the very beginning.

The character which had started me off on this new 2020 piece was based on a woman in her eighties who was holding forth – at length and loudly – in the waiting room of the Cataract Unit at Sunderland Eye Infirmary when I was waiting for my first operation. She made sure we were all fully aware of her opinions on every aspect of modern society, from her grandchildren to doctors, and she had nothing good to say about any of them!

A wonderful if totally obnoxious character, I just had to use her somewhere. Mind you, if I had to spend any more time with her in real life, I’d probably have strangled her!

She set something astir in my brain and I started imagining a few similar totally self-absorbed individuals, all of whom were inspired (if that’s the right word!) by people I had met at one time or another.

There was the foul-mouthed, totally ineffective door-to-door salesman who ranted that I thought I was better than him because I wasn’t interested in listening to his sales spiel and he bet he earned more money than me!  Then there was the young mother who was going to report her child’s school to “the education” because the rules said he could not have his mobile switched on in class when she might need to phone him. She was based on a former student (definitely not the right word – no GCSE mark higher than Grade E) from my time as a teacher who posted on Facebook that she disagreed with a doctor’s diagnosis of what was wrong with her child because “them doctors na nout” (sic) – and the reason she got poor marks in her exams was that it was a “s*** school”.

There were a few others, including a young man who finds it impossible to believe that any woman (or young girl) could say “No” to him. I’ve come across quite a few of those in my time so he was an amalgam of all of them.

For each I wrote a monologue which might (or might not) have become part of the play. To me they seemed to epitomise a society which was becoming increasingly solipsistic, a society in which more and more people feel that they are at the centre of the universe and their needs must always be met before anyone else’s. As another example, I was reminded of an incident I witnessed in which a woman was just leaving her parked car when another car drove up and a man jumped out, showering her with abuse because he wanted to park there: “I saw that space from the end of the street!”

This, I thought, was England in 2020, so England 2020 became the new play’s working title and gradually a structure, even a storyline, began to take shape in my mind after germinating for some months. This is another part of my way of working: unless I have a deadline, I take my time, allowing ideas to mature in my mind, often for months. Mind you, I did once write a play in twelve hours but that was in really exceptional circumstances. On the other hand, the afore-mentioned Cold in the Clay was 21 years in development!

And then along came Covid-19 and suddenly England in 2020 changed completely.

There is a play – in fact, there are, no doubt, many plays – to be written about England during the pandemic but writing something now would be a bit like ending Romeo and Juliet with the balcony scene. Sadly there is so much more to play out.

What is certain, though, is that England 2020 is no more. Will it be revived? Who knows? For who knows what society will be like when we finally come through the pandemic?

Perhaps I could adapt the monologues to make them suitable for actors looking for something a bit different for an audition piece? But with almost all of our theatres closed, very few companies (very few indeed!) are even considering, let alone planning new productions so I cannot see there being any great demand.

And when we finally come out at the other end, who knows? Perhaps the pent-up frustrations of our unemployed actors, directors, writers and producers will burst forth in a new flowering of creativity. Who knows?

Or perhaps, all confidence gone after a year (and it will be at least a year) of not just no work but no chance of any work, they’ll have given up, their love (and love it truly is) of their profession drained away by lack of hope.