There are plans for Middlesbrough (or perhaps somewhere near) to host a new college, run by Star Academies and Eton. 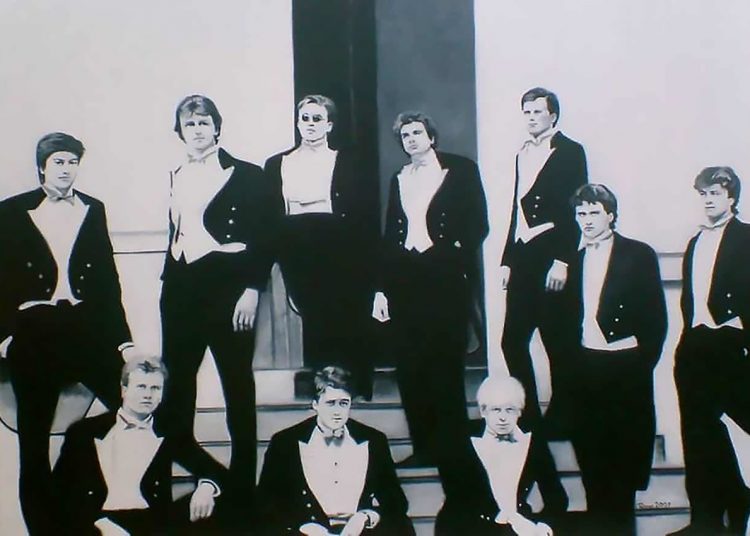 "General Election Bullingdon Club Members in 1987, including Boris Johnson and David Cameron" by Diego Sideburns is marked with CC BY-NC-ND 2.0.

While the world is – rightly – engrossed and revolted about what’s happening in Ukraine, odd things are stirring in the undergrowth of the Teesside educational network.

It is a bizarre tale. Eton is fixed in the public imagination as a place of top hats and tails, Johnson and Rees-Mogg, tuck shops, the wall game and the rowing lake. Yet soon its environs could spread to include the rather less endowed areas of downtown Middlesbrough.

The town, much to its surprise, may become the home of a sixth form college, opened by Eton in partnership with Star Academies — a trust run by the recently knighted Sir Hamid Patel. According to the Times:

“the schools (two others are planned elsewhere in the North West and West Midlands)  are the result of a whirlwind relationship. Simon Henderson, the headmaster of Eton, first met Patel in the autumn of 2020. Despite hailing from very different backgrounds, they are now firm friends as well as partners in the venture that both say is a long-term commitment.”

Plans for a new college

The new post-16 college is being designed to help to give young people who have done well in their GCSEs the opportunity to achieve the A-levels they need to go to Oxbridge and other elite universities. They will be created under the free schools programme that was set up by Michael Gove, with government funding, but also with an injection of ‘hundreds of thousands’ of pounds from Eton.  The school – site location yet to be proposed – will take 240 pupils per year, with some teaching delivered by subject specialists at Eton and with access to talks from high-profile speakers. There will also be academic essay prizes, debate clubs, Oxbridge-style tutorials and the chance to learn Latin. Each year teenagers from the new schools will have the chance to attend Eton College for a summer school.

“Henderson, Eton’s head master since 2015, said the locations were chosen after extensive local conversations with politicians, businesses and communities.”

That was news to local Middlesbrough MP Andy McDonald who said his first knowledge was after being contacted by a local paper and it was also news too for ‘the community’ however you define that.

Henderson and Patel reel off statistics, making the case that the sixth forms are needed in each of the chosen towns — in Middlesbrough 35% of pupils get five good passes at GCSE, yet only 8% of teenagers in the town achieve A-level grades that would gain admission to the top third of universities.

Is it creaming off?

So will it be simply a creaming-off cuckoo in the post 16 education nest on Teesside?  Both Henderson and Patel deny this. Patel says:

“There are bright kids who have clearly got potential, who for a whole series of reasons are not going on to convert that potential into the kind of A-level resus that allows them to access top universities.”

Others disagree.  Francis Green, Professor in Education Economics at University College London, says in a commentary in ‘Schools Week’ that there are countervailing arguments:

“Academically-selective schools have a dampening and potentially demoralising effect on neighbouring schools. Evidence tells us that the progress of children who are not selected is harmed by the presence of academically-selective schools in the area. I can’t see why it would be different in this case. When eventually the ‘lucky’ locations for the three ventures are revealed and approved, headteachers in some nearby schools may be justifiably worried. To counter the potential harm in these areas, Eton could be doing more good if the new colleges were required to be no more academically selective than neighbouring schools and sixth-form colleges.”

Somehow, I can’t see that happening.

Leaving Eton to one side, the ethos and governance of the Star Academy network seems to militate against social engineering. Its governance, via a legally imposed complex multi-faceted tier of ‘members’ ‘governors’ and ‘trustees’ is establishment star studded for an enterprise based firmly in Blackburn.

Starting off with a Lord Lieutenant, Lord Shuttleworth (an OE himself) it includes a few ex local council chief executives, Sir Michael Wilshaw former Chief Inspector at Ofsted, Julia Cleverdon, a chum of Prince Charles and the big wheel in both Business in the Community and HRH’s charitable trusts, former Blackburn MP, Jack Straw and Peter McKee, the Vice Provost of Eton.

Mr Patel also enjoys good connections; his biography lists him as a member of the Ofsted Board and is a board member of the Confederation of School Trusts. He also sits on the Youth Endowment Fund Committee and is Chair of the charitable trust’s Grants and Evaluation Committee. In recognition of his ‘service to education’, He was awarded a CBE in 2015 and a knighthood in the Queen’s Birthday Honours in 2021. Having got over that drawbridge, he now also sits to guard it as a member of the Education Honours Advisory Committee – a useful man to know, perhaps.

One clue to the direction the school could take is contained in a coy admission; Again, according to the Times:

“..the potential sites were picked because of their good transport links from outlying areas — it is expected that pupils will travel from up to an hour away.”

Middlesbrough is not yet (despite the dreams of its elected Mayor Andy Preston – who is also orgasmic about the Eton interest) a city. It is relatively small. An hours travelling from the town centre can take you to lush pastures; leafy places in North Yorkshire, up-market Yarm or the nouveau riche footballers gated estate of Wynyard Park

So where now?  Arguably, there is little room for a new school in this area – whatever its background. A hotly contested area review of FE and sixth form provision across Teesside undertaken in 2016 has bedded down well and there is a stable (and co-operative) structure in place – something already noted by the national body, the Association of Colleges. It’s not certain if the rigorous requirement to consult with other educational partners and local councils – which was a feature of that DfE review – will now re-occur given the school’s ‘free’ status, but there is no doubt that the existing providers for sixth form A level provision in the catchment area will be less than exhilarated by the arrival of such a rival bird of exotic plumage and with such coruscating connections with the top echelons of high Tory Britain.

Nazanin Ratcliffe is on her way home