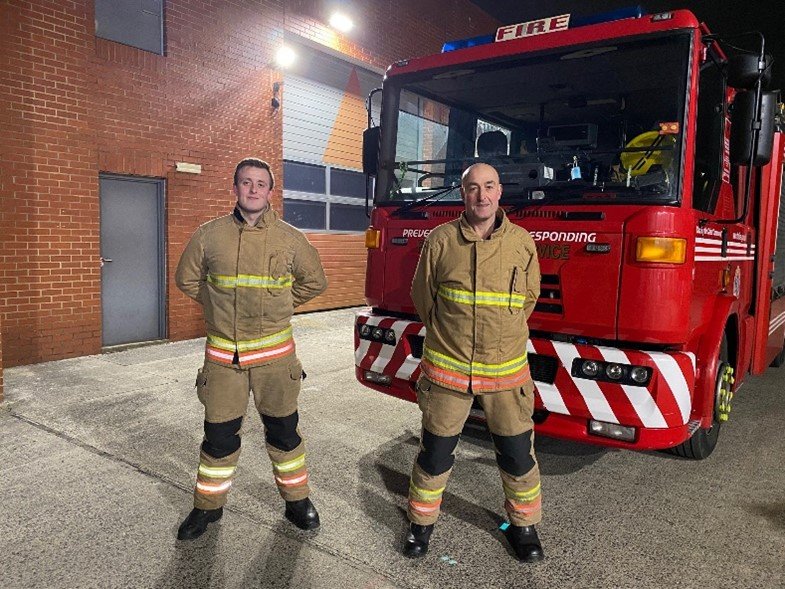 Tony Bird has been a firefighter for most of his life. He started work, aged 16, as a miner and soon after he followed in the footsteps of his own Grandad Joe, who was a Retained Firefighter at Chopwell Fire Station back in the 1950s and 60s. Chopwell is now the only retained fire station in Tyne and Wear.

Tony first worked at Marley Hill Colliery in Whickham, transporting materials to the coalface by assisting the pit ponies. Tony stayed at Marley Hill until its closure in 1981 when he was transferred to Wearmouth Colliery in Sunderland, where he worked on the coalface until 1993. Tony was also a firefighter. He was a retained firefighter or on-call firefighter; a firefighter who does not work on a fire station full-time but is paid to spend long periods of time on call to respond to emergencies through the Retained Duty System.

Tony celebrated the essential role a Retained Firefighter plays in the local community during  National On-Call Firefighter Week, a campaign delivered by the National Fire Chiefs Council (NFCC) during the first week of March this year. The campaign highlighted the opportunities to become a professional firefighter which are open to people from all walks of life. A national website for on-call firefighter recruitment means that people can enquire about opportunities in their area at any time of the year. The website is packed with real-life stories from on-call firefighters, it gives an insight into what the role entails and what recruits can expect.

“I’m really proud and honoured to have served my local community for nearly forty years as a firefighter. None of this would have been made possible without starting out my journey as a Retained Firefighter,” said On-call Watch Manager, Tony Bird.

Tony is Chopwell born-and-bred, he is husband to Susan and they have a son, Anthony aged 32, who also works for Tyne and Wear Fire and Rescue Service as a Retained Firefighter. Tony has five granddaughters.

Tony continues: “The role of a Retained Firefighter is an occupation that holds great respect with residents in the village.  I’ve had people knocking on my front door if someone has collapsed or is badly injured, as you get taught first aid skills as part of your training.”

Tyne and Wear Fire and Rescue Service is a real family affair for Tony as his son Anthony (who works in a glass factory), and nephew Kallum aged 26 (a local landscaper) also work as retained firefighters at Chopwell Community Fire Station. They started out their association with the Service by joining the Young Firefighters scheme.

In 1997, Tony made the transition to being a Whole Time Fire Fighter based at West Denton Fire Station and later moving to Swalwell – where he has worked for the past five years.

Tony is also an active member of the Chopwell Miners’ Banner Group and helps to set up the annual Christmas lights display.

Tony concludes: “Being a firefighter is the best job in the world and I wouldn’t swap it for anything else.  Having the chance to help safeguard people I’ve grown up with in my home village is very rewarding.”

Jon Anderson, Service Delivery Station Manager for Tyne and Wear Fire and Rescue Service, said: “National On-call Firefighter Week is an opportunity to highlight the important working commitment made by Retained Firefighters.  In our region this is provided at Chopwell Community Fire Station.  The crews provide an essential role in helping to protect the local community.

“We are always keen to hear from people who are looking to join the Service and deliver this crucial role.  It is a very fulfilling job that can help bolster people’s careers.

“Retained Firefighters provide an immediate response to a variety of different incidents from road traffic accidents, flooding and residential fires. These are fully trained people providing assistance when their community needs them most.”