The nation hosts a nightmare Covid-19 scenario, the economy is in a grievous state, and our national debt is eye-wateringly high. 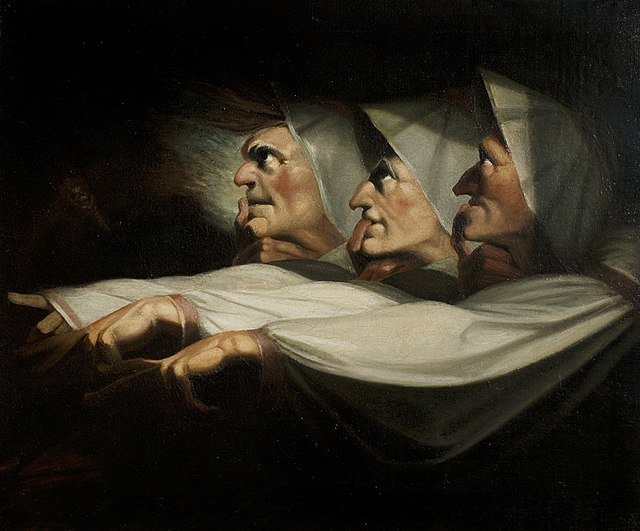 The wider world of the Scottish play resonates with our times in its themes and imagery. The original audience would have regarded Macbeth very much as the ‘video nasty’ of its day. King James himself was terrified of witchcraft and was a firm believer in the supernatural, as would have been most of his contemporaries, driven by a very real, and literal, belief in God and the devil, heaven and hell.

James even wrote a treatise on Daemonology.

One might be forgiven for thinking that we too are living in portentous times. The omens are not good. On 13 January, Merlina, queen of the resident ravens at the Tower of London, was announced missing and presumed dead. She had disappeared before the Christmas lockdown when the ravens were being ‘put to bed’. Merlina has flown free before, but has always returned. The Tower now only has seven resident birds. If the number falls below six then the Kingdom is doomed, according to legend. There are several significant collective nouns for these magnificent birds: they are a conspiracy, a murder (also of crows), a treachery or an unkindness of ravens. They have always been seen as birds of ill omen. Lady Macbeth, immediately before she asks the “spirits that tend on mortal thoughts” to fill her “from the crown to the toe top-full of direst cruelty” and “stop up the access and passage to remorse” speaks of the raven:

Duncan, on his arrival at Dunsinane, observes, “this castle hath a pleasant seat” and calls his hostess “fair” and “noble”. Yet, we know that she has conspired with her husband, to treacherously and unkindly murder the king. She is simply looking “like the innocent flower” but being “the serpent under’t”. She is not to be trusted. Appearances are deceptive, nothing is as it seems. Sense cannot be relied upon. What appears fair is foul and vice versa.

Less than a fortnight after the pronouncement of Merlina’s assumed death, Boris Johnson took to his lectern to announce the horrendous milestone of 100,000 coronavirus deaths, and the number is still rising.

Not for one moment am I suggesting that this does not deeply sadden him, but the general media, the Opposition, some of his own party and I myself are virtually unanimous in believing that the government could have acted earlier to prevent such a catastrophic loss of life.

Johnson’s bid for kingship and popular standing, by putting the economy first, is not, I fear, likely to stand in his posterity. Furthermore, the United Kingdom teeters on a dangerous knife-edge, regardless of whether two more ravens die in the Tower. The union seems doomed! Brexit, the word which for some illogical reason cannot be mentioned, is only exacerbating the misery of the pandemic and the divisions of the union.

As if that were not enough, we are increasingly beset by unprecedented tempests, floods and winds to add to our misery, whilst sun, moon and planets align in rare conjunctions. It would clearly be wrong to attribute blame for these events to the government or the stars, though that is what many Jacobeans would have done. We are all to blame for the devastation of climate change and past governments of all persuasions are responsible to lesser or greater degrees for the inaction that has led to this. However, now that we have left Europe, our ‘sovereign’ government, whilst paying lip service to a green agenda, seem hell-bent on wreaking further damage: banned pesticides reintroduced which are disastrous for pollinators; deforestation of ancient woodlands; building on flood plains, sanctioned by relaxation of planning permission; the steady watering-down of proven farming practices; the absurd proposals for a new coal mine … the list continually grows.

In Macbeth Lennox has this to say about the night, unbeknown to him, of Duncan’s murder:

We also discover in the next scene that “this sore night hath trifled former knowings.”

Duncan’s horses, “minions of their race … broke their stalls …and ate each other.” An unnatural and supernatural event!  All Macbeth can say in reply to Lennox is, ‘’Twas a rough night” – just as we currently have to endure a ‘lumpy ride’. As the death total continues to rise, and Brexit problems continue to surface, Johnson and his cabinet daily play down the enormity of the situation we are in, preferring instead to hide behind the bombastic rhetoric of the vaccine. Don’t get me wrong: I am delighted about the roll-out of the vaccine and am looking forward to being jabbed! However, I fear that this good news is being used to cover up many other ills, not least the erosion of our democratic processes and the unlawful acts and lies perpetrated by our government.

Before she is murdered, along with all her children, Lady Macduff has the following conversation with her son:

This banter reflects the world of the play, where indeed the honest and those opposing Macbeth and speaking out are being killed or forced into exile. Perhaps I am being overly pessimistic, but with evidence of Priti Patel seeking to ensure that protest shouldn’t interfere with legitimate business and planning to increase police powers to deal with protest, I cannot help feeling that the parallels with Macbeth’s world are becoming markedly apparent. Politicians are regularly exonerated from acting unlawfully and even boast of being willing to do it again. Lies, or at least disingenuous statements, pour from the mouths of our elected representatives. There is no transparency. There is no accountability. We are being stifled.

Fittingly, the play starts with thunder and lightning. As the play progresses not only do the events become more diabolically dark, tempestuous, but daylight literally drains away:

Dunsinane becomes darker than hell itself. The porter declares, “But this place is too cold for hell. / I’ll devil-porter it no further.” Scotland is also increasingly described metaphorically as sick and diseased – just as the UK is, once again, being dubbed ‘the sick man of Europe’. The nation hosts a nightmare Covid-19 scenario, the economy is in a grievous state, and our national debt is eye-wateringly high.

Unlike the play, I for one cannot see how this will end. I do not perceive a Macduff on the horizon. The opposition to this corrupt government feels pitiful. It would seem that if we want our democracy back, and some semblance of governance with a duty of care, then we, the people of the UK, need to hold the government to account as vociferously as we can.

Join Steve Bray in his week of protests against corruption in June.