Fear Street: a unique take on a horror series

Katie Maughan reviews the latest horror trilogy from Netflix. If you enjoyed Stranger Things then this might be for you. 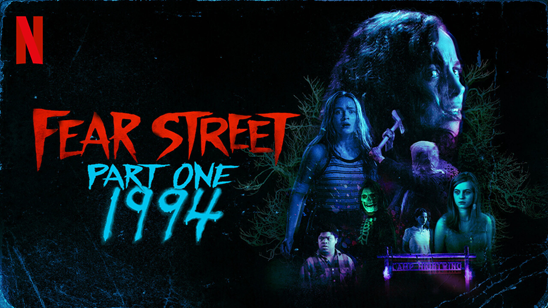 Fear Street 1994, Fear Street 1978 and Fear Street 1666 are the movies that make up the newest horror trilogy to hit Netflix. Unlike previous series, the three movies were released at the same time, each part a prequel to the one before it. The series cleverly ties together characters from three different decades to uncover the secrets of Sarah Fier, a previous resident of the town who was hanged for witchcraft.

The first movie stars teenage Deena and her girlfriend in 1994, who are stuck in a town that is seemingly cursed with the murders that happen every few years. A member of the town always seems to get possessed and go on a killing spree, but only ever kills residents of Shadyside. There are rumours that they’re being possessed by the witch Sarah Fier, which seems possible when Deena’s then ex-girlfriend Samantha sees a vision of her, before being hunted down by a series of familiar killers.

The second movie sees previous survivors of Sarah Fier’s curse, Ziggy and her sister Cindy back in summer camp in 1978. It just so happens that similar murders occurred then too, when a camp counsellor is possessed. In this prequel, we learn more about Sarah’s Curse and the mark she had previously left on their town.

The third film of the series takes us back to 1666 where Sarah Fier is being accused of witchcraft after being caught with the pastor’s daughter. The final film reunites all of the previous characters to show them the truth about Sarah Fier in a surprising twist.

In a style very similar to the Netflix series Stranger Things, also featuring Sadie Sink and Maya Hawke, Fear Street takes on a cool retro aesthetic that adds to the Stephen King-like atmosphere. Though each film is set in a different time period, the retro aesthetic manages to make an appearance in each one.

The films feature multiple killers, each with their own unique characteristics and origins. Throughout the three movies, they even become recognisable. Fear Street includes multiple horror tropes; possession, witches, monsters, and even gore as the films go on. The gore definitely gets more extreme in each movie, with the first featuring only one truly gory scene. The second features a lot more gore, but nothing compared to that which we see in the third movie.

Though this isn’t the first time that witches have made appearances in modern horror films, Fear Street puts a twist on the concept. In the first movie, Sarah Fier is simply a ghost story for the town, a scapegoat for the murders that followed years after her death. In the second movie, she becomes a much more real force of evil. However in the third movie, she becomes the protagonist. Sarah Fier becomes a character that we’re all interested in and support by having her shown through the first movie’s protagonist Deena.

The audience’s view of the antagonist shifts dramatically throughout the three movies, revealing new shocking information as we go. The plot is one of the most interesting I’ve seen in any recent horror series, especially because of the unorthodox way that the information is revealed.

The Fear Street trilogy is unlike any horror series Netflix has created, with both a unique plot and structure throughout. Any horror fans would love this series, especially those who are fans of vintage horror. The films also feature LGBTQ+ leading ladies, who are the driving force of the series.

Fear Street is the best horror movie series Netflix has made so far, and it’s definitely worth binge watching.

Confessions of a student during Covid-19

Confessions of a student during Covid-19