One rule for them and one for us... 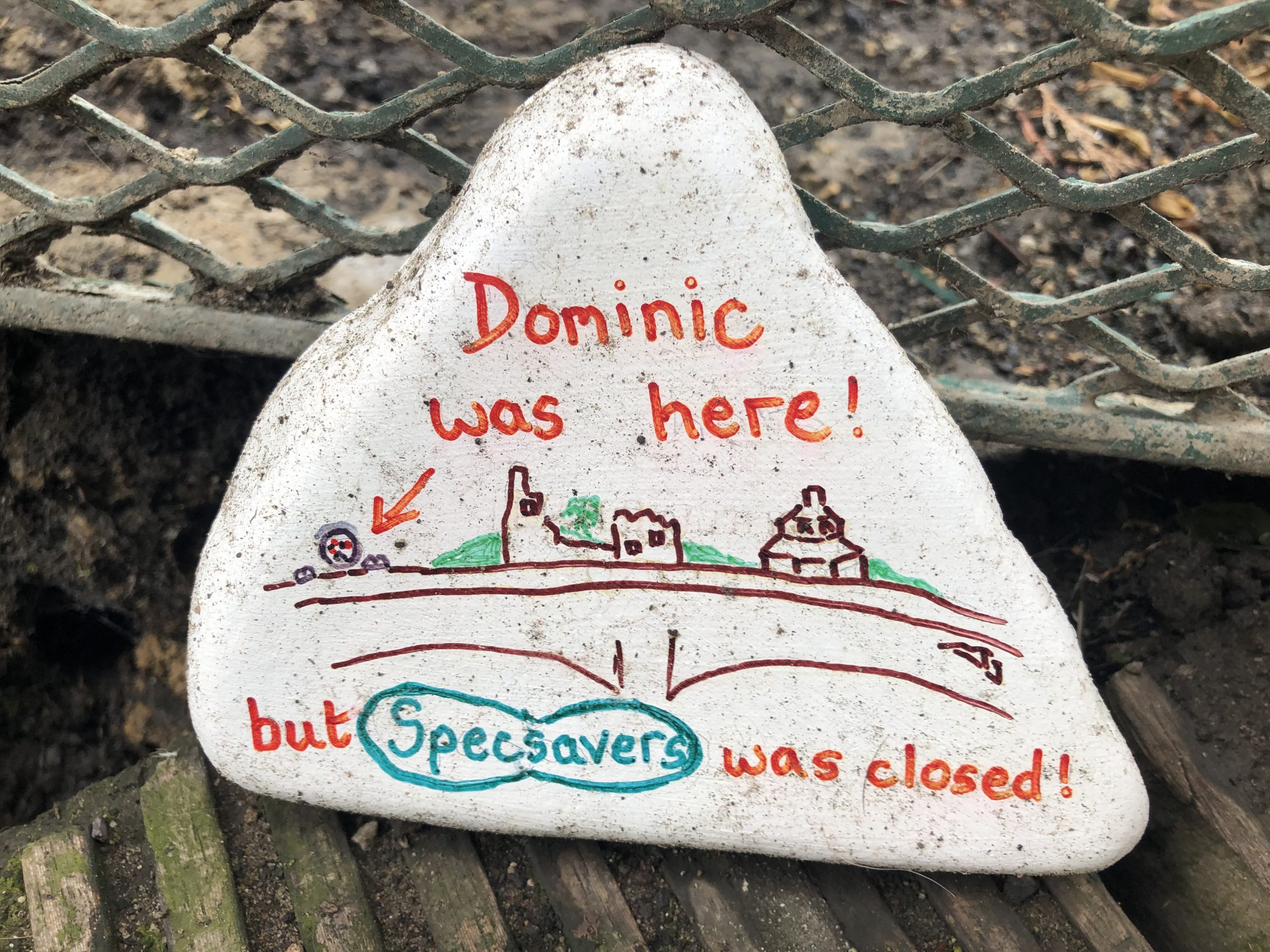 On Sunday March 22nd I drove 20 miles from my home near Tow Law in County Durham, to Barnard Castle, not to test my eyesight but to take care of my aged father who had recently moved into sheltered accommodation so that he could be near to my mum who was in a care home, suffering from Alzheimer’s. A lockdown was belatedly on the cards in response to the rising death toll related to Covid19 and the rapidly increasing infection rate. There had been rumours that the army would be setting up roadblocks to prevent unnecessary journeys. I knew that if I stayed at home my dad would be completely isolated and would probably die of loneliness before any virus might lay waste to his respiratory system.

I left home in a panic, not knowing how long I would be away or whether or not I would even be allowed to stay in my father’s sheltered housing complex but determined to care for him. I threw an old Z bed mattress into the back of my car along with a few clothes, some supplies from the back of my pantry and an assortment of duty free alcohol that had accumulated, figuring that I might be desperate to achieve mild oblivion now and again. Nearly four months later, at the end of June, I am still sleeping on the floor of my father’s tiny one-bedroomed first floor apartment. We’ve finished the over-aged port and most of the Madagascan vanilla rum, the cheap sangria and the Jerez sherry. My life is on hold. Meanwhile my mother has died.

My father’s daily routine for the past year or so had involved spending most of the day with my mum inside the care home, playing tunes on his melodeon, singing little ditties, looking at photographs and reminiscing. He took his main meals with her, encouraging her to eat when she struggled to remember she was hungry. His near constant attention to his wife of more than 65 years meant that he did not cultivate new social networks outside of their world together.

In the days before the lockdown the care home began to limit family visits and so Dad and I entered our new relationship as flat mates without having seen my mum for several days, or months in my case. March 28th was Dad’s 90th birthday. It was also their 67th wedding anniversary. He was desperate to tell her he loved her, to hold her hand, hug her and kiss her. We walked the short distance from my dad’s flat to the care home and I rang the reception. I begged them to bring my mum to the window so we could wave at her. We sat down on the kerb to wait and Dad began to cry. A car stopped. It was an off-duty doctor. “Is everything alright?” he asked. I tried to explain through sobs. He uttered some kind words and left. I felt bad for him. What medical advances and years of training can treat a broken heart? He needed to attend to the dying and dangerously ill, to the infected and those with compromised immune systems. We were just another family living through the pain of enforced separation.

I already knew far too much about the virus. Studying human biology at secondary school years ago had left me with a curiosity about bodily functions – how to help and hinder them and what happens when our cells come under attack. I had learnt all about cytokine storms from a doctor friend early on in the pandemic and, being atopic, I was damn sure that if I was infected my immune system would go bonkers and I would end up killing myself with an over-response to the invasion of my system by alien protein particles.

I told my dad that we were going to be ‘Super Preventers’ during the pandemic, that we must be part of the solution to defeat the novel coronavirus, that we must set a good example and act in everyone’s interest, not just ours. My dad found it hard, not just because he couldn’t visit my mum, but because I wouldn’t let him pop out to the shops every day for things he didn’t really need. We fell out over a household banana shortage, the wrong kind of marmalade, the size of potatoes, the perennial problem of what to do with left-overs, and whose turn it was to mop the bathroom floor. But we also grew closer together, rebuilding bonds that had been insufficiently nurtured during my adult life.

We tried to get regular FaceTime with my mum but staff at the care home seemed increasingly stressed and busy so we sometimes went more than a week without any contact.  We knew that the residents were confined to their rooms and Dad sensed Mum’s increasing confusion as the previously familiar carers appeared gloved and masked beside her during our infrequent FaceTime calls. When the care home reported a positive case of Covid19 we felt sick with panic. County Durham had by then reported the highest number of care home deaths from the disease. On June 5th after a second confirmed case in the care home we were asked about DNR (Do Not Resuscitate) and consulted about putting in place a Covid19 Emergency Health Care Plan. In total Mum tested negative three times for the virus but she died on June 16th after displaying Covid19 symptoms. Her death certificate states “frailty and advanced dementia” but who knows what part the lockdown played in her sudden deterioration and eventual demise or if indeed the virus was also at play. I was shocked to discover that a third of negative test results are found to be ‘false negatives’. We still know so little about this virus and we are not aggregating data to build a comprehensive picture.

It is well known that people with dementia respond well to a range of stimuli and human contact. Essentially my mum and thousands of others like her have been deprived of this relatively cheap form of therapy simply because human contact is the most likely means of transmitting the virus. I get that – I want to stay in lockdown until a vaccine has been found – but we will always wonder whether her life could have been prolonged if we had been able to break the rules and wander up to the care home to sit with her. However, that would not only have been illegal but also a disregard of our collective responsibility to our fellow citizens, which brings me to our location – the now infamous town of Barnard Castle.

As we approached Easter weekend the government began to panic about how the public would respond to the lockdown rules. We listened to Boris Johnson, government ministers, chiefs of police, mayors, council leaders and national park authorities begging people to ‘stay at home and save lives’. I sat my father down and laid down the law, “We are not going to be part of the problem. We need to model best practice, so we will not be going out at all this Bank Holiday weekend”. It was tough love and it pained us to be confined to our tiny first floor apartment with no access to the outside world for four sunny days, but we did it for the greater good. Imagine then our anger when the story later broke about Dominic Cummings’ little jaunt to supposedly test his eyesight.

The national media subsequently descended on the town and #BarnardCastle began trending on twitter. Local creatives have immortalised the miscreant’s visit with fake blue heritage plaques and witty images in a trail of painted stones leading down to the River Tees and across the bridge to the place where Cummings apparently sat on a bench ‘feeling a bit sick’. Turner prizewinner, Jeremy Deller even commissioned his own painted stone from local artist Stuart Hughes to catch the mood in perpetuity.

There are now souvenir mugs bearing the Spec Savers logo with the slogan ‘Should have gone to Barnard Castle’. These will presumably be mass produced in time for the day when the town can legally be visited by hordes of people wishing to focus their eyes on the town’s many historic sights. But for those of us who observed the rules that fateful weekend because of our belief in collective action, our concern for vulnerable people and for frontline workers, especially in the context of huge personal loss, Cummings’ arrogant breaking of the rules, and subsequent getting away with it marks a new low in Tory exceptionalism. The bereaved and the lung-scarred don’t need a mug to remind them. They will carry their painful memories into the voting booth at the next election.

Mutual aid and solidarity in Alnwick