A Tyne and Wear firefighter who has just retired from the service encourages others to follow in his footsteps. 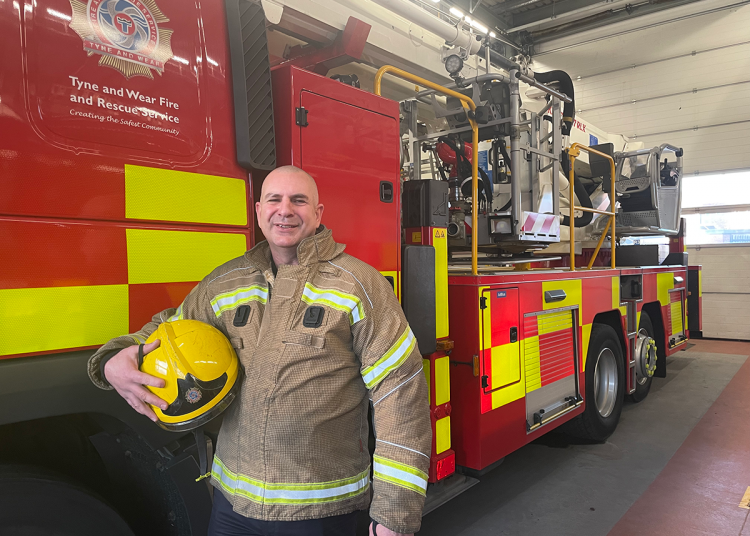 A dedicated firefighter who has spent over half his life protecting Tyne and Wear has hung up his helmet – but not before encouraging others to follow in his fire service footsteps.

Neil Borsberry always dreamed of becoming a firefighter and after working as joiner for five years his dream came true in 1992.

The 53-year-old has now been a firefighter for 30 years and is just weeks away from retiring and riding off into the sunset on his BMW motorbike with his wife Allison.

But Neil leaves Blue Watch at Gateshead Community Fire Station in good hands after passing on his three decades of knowledge and skills.

The father-of-four has watched on as the next generation of firefighters join Tyne and Wear Fire and Rescue Service (TWFRS) amid their latest recruitment drive.

And now Neil has called on others to consider following in his footsteps and beginning a career that will change your life, and those of your community.

He said “I will miss my watch when I go, we are like one big family, they pick you up when you are down and we work through hard times together.

“It doesn’t matter who you are in this job, it’s all about what you bring with you in experience and character because there are some tough times and you’ve got to keep going.

“This is an exciting time for TWFRS and for the whole of Tyne and Wear because the face of the Service is changing.

“New people bring new ideas and energy but we all have the same thing in common – we are proud to be in a role that keeps our community safe.”

Neil has had a lifetime of attending interesting incident during his time with TWFRS, even losing his finger tip during what looked like a basic job back in 2013.

After receiving a call about a little bit of smoke coming from the first floor of a property in Gateshead, Neil and his crew noticed a small fire in a faulty fitted fireplace which hadn’t been put out properly.

Quickly they realised they need to get the mantle off before someone got seriously hurt as one of the legs had fallen through the floorboard, Neil put his hand under the mantle to take it off and lost his fingertip.

He said “If it wasn’t for the other two lads helping secure the fireplace in that building, we could have lost a lot more than a fingertip that day.

“Incidents like that are why you’ve really got to be prepared for anything in this job and you’ve got to see it through, you never know what an incident is going to throw at you.

“It’s great to see the new recruits coming through, sometimes I wish I could be around for a bit longer to help them through the next stages of their careers and offer more advice but I would be around forever.”

And today (Friday) one of TWFRS’s highest ranking firefighters has echoed Neil sentiments and thanked him for his service.

Assistant Chief Officer Lynsey McVay said “We are looking for the best people to join us not matter their background or experience, sometimes the more varied the better so you look at problems slightly different and bring a new way of thinking.

“We are so proud of Neil for all his hard work over the years and for passing on his wealth of knowledge onto the next generation.

“It’s a testament to his character and the nature of the fire service that we are always looking after each other.

“In the last two years we have welcomed over 100 new recruits into the fire service after a long freeze and it’s firefighters like Neil who have welcomed them with open arms.”

TWFRS are currently recruiting for wholetime firefighters on their website.

Boris Johnson's comments on Ukraine and Brexit are an insult