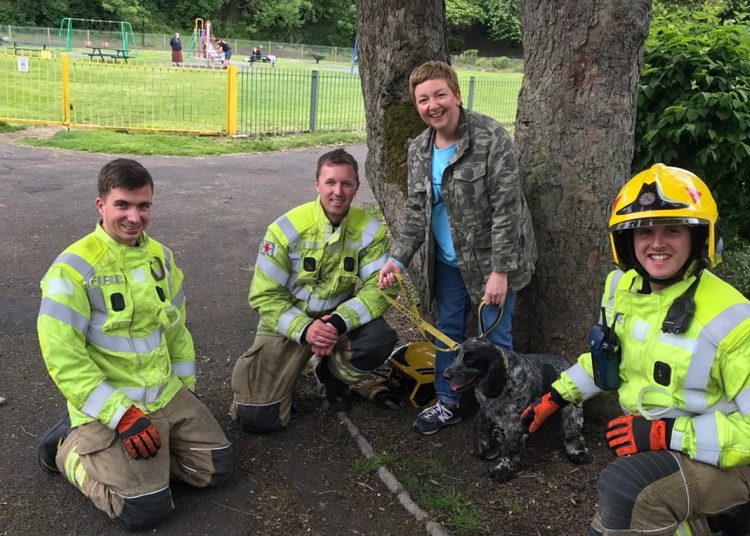 A relieved dog owner has praised firefighters who rescued her distressed cocker spaniel when it became trapped under the roots of a fallen tree. On Saturday afternoon, Fiona Reid was enjoying a leisurely stroll with her eight year old daughter, Freya, and their spirited cocker spaniel, Baxter in Cleadon Park. But things turned sour when Fiona noticed her nine and a half year old pooch had gone missing.

The mother and daughter frantically looked all over the park for their lively canine, but they quickly realised something was wrong.

After hearing some familiar barks Fiona located Baxter who’d managed to tumble down a hole made by a fallen tree.

“When I realised he couldn’t get back out himself, I tried in vain for half an hour to rescue Baxter from the hole. But with no success.

“I could see that he was becoming increasingly distressed by the minute, and the more he panicked the more soil was coming down on top of him – making it harder to retrieve him.”

Speedy response from Tyne and Wear Fire and Rescue Service

As Fiona thought time was against her, she decided to make a 999 emergency call to Tyne and Wear Fire and Rescue Service.

n appliance from South Shields Community Fire Station crewed by firefighteras from Green Watch was quickly on the scene within four minutes.

A happy and relieved dog owner

Fiona has now spoken about how the firefighters went about rescuing her beloved Baxter – and praised them for their intervention.

“I was very relieved when Baxter was rescued. The firefighters were great.

“They managed to free him in less than five-minutes, and at every step of the way they were trying to calm him down as he’d became agitated.”

A relieved Fiona has also offered some useful advice to other dog owners who may not be aware of the risks. She said;

“Always be alert to the dangers when you’re out and about with your dog,

“I was always of the opinion that if they can get in, then they can get out.  But this was definitely not in the case for our Baxter.”

Steven Bewick, Station Manager at South Shields Community Fire Station, has said the crews were happy to reunite the mother and daughter with Baxter.

“It’s amazing just how quickly a fun stroll in the park can become tainted within the blink of an eye.

“Dogs are naturally inquisitive and they will always follow their nose to discover the next adventure.

“But as proven by Baxter’s misfortunes even some places that appear to be safe and fine can actually be dangerous for our four legged friends.

“We were happy to lend a hand and reunite Baxter and Fiona together to enjoy the rest of their walk in the peaceful surroundings.”

For further information about the work of Tyne and Wear Fire and Rescue Service please visit our website www.twfire.gov.uk

Feeling the full force of Teesdale at the High Force Hotel