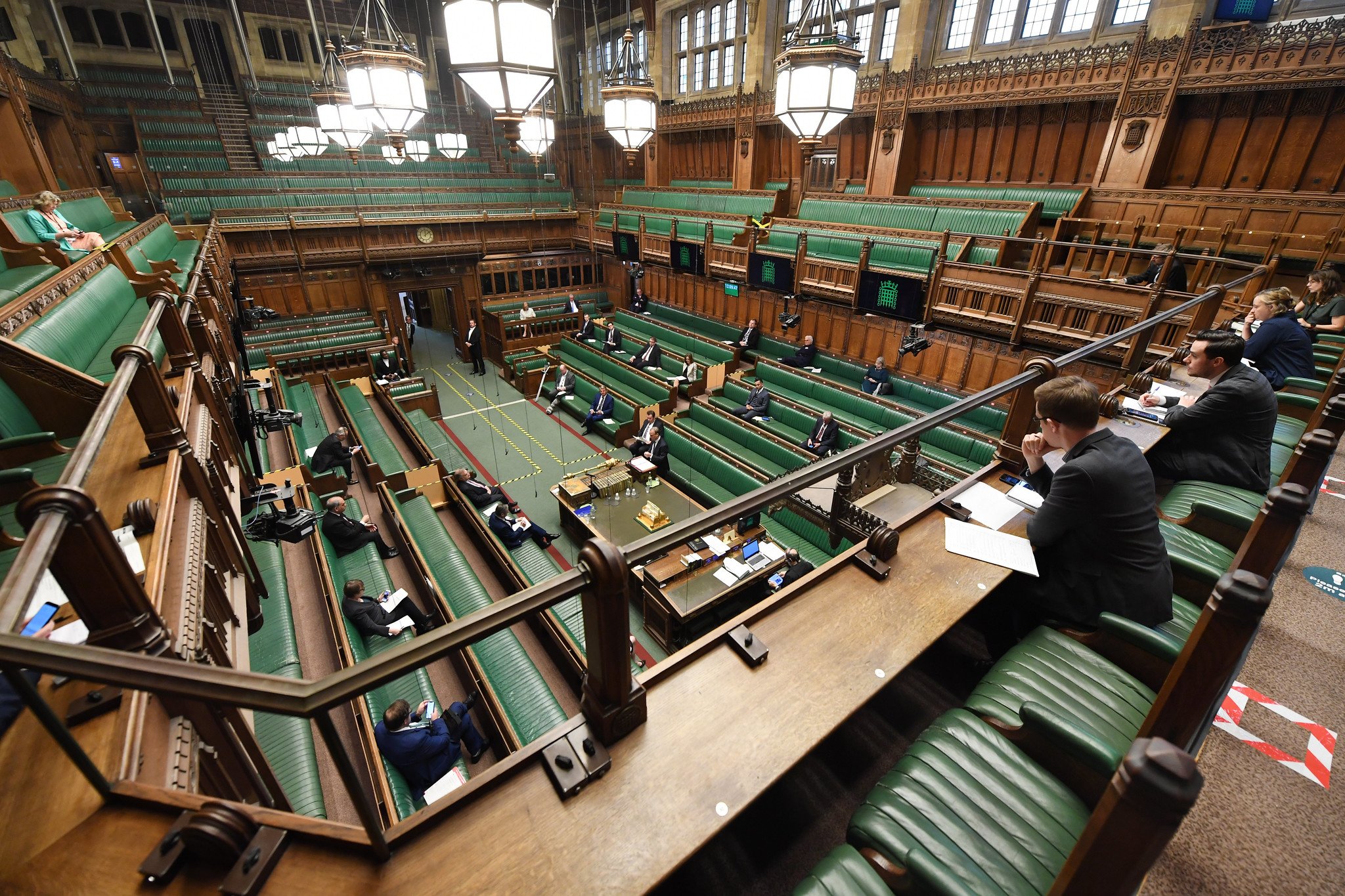 Reproduced with the permission of Parliament Creative Commons licence

Democracy is about giving the people a say. Not being told what to do, but having their views represented. The conventional way to do this is to have a parliament with people’s views represented by the candidate who gets the most votes in an election.

In the UK, our parliamentary democracy uses a ‘first past the post’ system. This goes back historically to a time when there were only two parties: Whigs and Tories. At this time it could be said that the first past the post system was relatively fair, notwithstanding the corrupt practices prevalent and the fact that vast swathes of the population including all women were disenfranchised!

The current large majority is mainly due to this first past the post system. Our voting system is no longer fit for purpose.

Sadly, for the voter, neither of the two main parties have the political will to change the system because it would be detrimental for them. Hence, we get large majorities on occasions. Hung parliaments are traditionally perceived as something bad. We are not used to consensual coalition governments. Our system is not truly democratic.

Furthermore, because the individual parties provide advertising and support for their candidates, it is assumed that once elected they will toe the party line. The party whips’ job is to ensure that this is the case. Is this still democratic? Are the views of the people being accurately represented?

People in the UK were clearly wrestling with democracy in the 1930s, the first time that there were three parties with a significant number of seats. Winston Churchill dared to say that the duty of a people’s representative in parliament was not to their party, but respectively to: their conscience, their constituents and their party!

How well are the wishes of the electorate represented by a single political party with a large majority of, say 80?  Not very well!  People accept this on the basis that in another four or five years they can vote out a government. This is not good enough if the party in charge is behaving in an undemocratic way. An 80 seat majority does not give them a mandate to do whatever they like! That would be a travesty of democracy. Fortunately, successive governments have generally lived up to the principles of honour and maintaining democracy, particularly in times of a national crisis.

There have been majorities much bigger than 80. Blair had three figure majorities in 1997 and 2001. Thatcher in 1983 and 1987. Brown inherited a large majority. The coalition majority in 2010 was close to 80. Did democracy stop after each of those elections? Of course not! On each issue, the governing party whipped its members, but still the views of the people on particular issues were heard and debated in Parliament.

Brexit and ‘the will of the people’

Each time Thatcher achieved a massive majority, people who didn’t vote for her dusted themselves down and prepared to oppose the policies that they didn’t agree with. The same thing was true for with Blair’s opponents. The countryside was on the march against ending fox hunting. Those who opposed accepted the democratic vote held in Parliament, if they lost.

Compared with those times, something feels wrong now. I think that Brexit broke something about our democracy, by declaring itself to be ‘the will of the people’. The reasoning behind this was that the Leave vote got 52% of the vote. This is not true!  37% voted to leave, 35% to remain and 28% were undecided. How can this be called the will of the people? Furthermore, we now have evidence that there was interference in the referendum and that lies were told.

Back to ‘normal politics’?

Normal politics is not about MPs simply voting as they are told by the party whips. Ideally MPs should listen carefully to the views of their constituents and weigh them up using their consciences. It should be about establishing a way forward despite a range of opposing views. In other words, it compromise is sometimes needed.

However, the last four years of Parliamentary politics been almost solely about two opposing forces colliding, with each one intent on total victory. This has also happened within the public at large. There was a time in the spring of 2019 when it looked as if infighting had been suspended and a compromise would emerge that would satisfy both sides (some kind of partial Brexit and a second vote). This seemed reasonable.

It failed, and our political system failed with it. Quite why it failed is baffling. A new and ruthless leadership emerged that seemed intent on delivering what was constantly referred to as ‘the will of the people’ at any cost!

That was bad enough. It got worse. Our democracy is based on our unwritten constitution. Her Majesty is an expert on the constitution – her schooling concentrated very heavily on that. When Parliament was prorogued in contravention of the constitution (as verified when the Supreme Court re-established the constitution), it felt very wrong. There was a media outcry. They, in line with the government, were challenging the constitution.

How could they even do such a thing? Quite simply because the media, and parliamentarians, had seized on ‘the will of the people’ as a popular mantra!  We won, you lost!  We have a mandate to do exactly what we want. That meant they were even suggesting that the constitution was out of order. Some people called this an undemocratic coup. Whatever you call it, democracy had failed. The government should have fallen. Instead, democracy was broken.

The obvious solution to a government losing its majority would be a change of government. The conventional way of fulfilling the constitution would be for the leader of the largest party to call for a vote of no confidence, allowing the opposing parties to vote the government out. A new government would emerge, and democracy would be restored. That would be the constitutional way to fix it. But we were living in unprecedented political times. The 2019 parliament had at least three significant opposition parties, which did not necessarily work together. It seemed that compromise was not possible. Although the government was behaving unconstitutionally, the actual break was caused by opposing forces refusing to fall behind the largest party. Perhaps this is not acknowledged clearly enough! In the absence of a united opposition, the constitution could not come up with a solution.

Despite a robust defence from the Supreme Court, the constitution was nevertheless defeated. The opposition, despite having a majority, were completely powerless to act. There was one possible solution out of the mess – an election. But with the opposition as divided as 1983, the same result as 1983 would be likely. The opposition would be absolutely hammered.

Some said, “Never mind, at least there will be a result, and there will be a constitutional government again!” In the end, it was a relief that the majority was only 80, and not the 144 that resulted in 1983. Yes, only 80!

What happened after the December 2019 Election?

The new government was now constitutional. Normal politics could resume.

Yet it didn’t. The opposition was still as divided as ever. Going back to 1983, the opposition quickly re-established order by electing a new leader.

This didn’t happen in December. Without effective opposition, the government assumed a role that was closer to an elected dictatorship than proper democracy. Why? Nothing has changed. The constitution is as it was. There can be argument, lobbying, protesting and consensus as there was historically after the return of governments with huge majorities. What had changed?

There was a great call after the election for ‘acceptance’. The same tactics were being rolled out that had effectively been used after the 2016 referendum. We won, you lost, you shut up. This was again perpetuated in the media. It didn’t help that Labour took such a long time to choose a new leader. Opposition was effectively in limbo for months. Covid-19 also arrived in the middle of this, confusing matters further.

The result is a changed public perception to ‘normal politics’. And this is serious. Those who have ‘won’ expect those who have ‘lost’ to keep quiet. Those who have lost seem quite content to do just that. There is a psychological term for those who do nothing because they think there is no point… and that is learned helplessness. But democracy is an active process, and without active opposition to a government it can slide towards an elected dictatorship.

It is easy to say that something is still broken. But can it be fixed? If so, how? To return to normal politics we need to get back to where we were in 2015, when the perception was that everyone (not just the ‘winners’) can, and is encouraged to, have a say. So how can this be achieved?

How can democracy be fixed?

A docile citizenship, too lazy, or worried to protest, is a government’s dream! The 80 seat majority is only a barrier to effective opposition because the media presented politics win/lose as a result of the 2016 referendum. The propaganda has succeeded in persuading people to believe that an elected dictatorship is normal politics! There’s a reluctance to get involved.

The best way to get back into normal politics, is to realise that challenging the government can be successful. The A-level students, their teachers and parents took immediate, demonstrable action throughout England and Wales. The government made a U-turn. This is what democracy looks like! Democracy depends on people being active when there is palpable injustice. Passive acceptance is the friend of dictatorship

It is about changing hearts and minds and it is easier than we sometimes think. Small protests in town squares are a great way to start.

We can find out about local ‘grassroots’ issues and campaign for those. Where I live in Herefordshire that means farming. The communities here care about food and rural living. They find it unacceptable that higher standards of animal welfare may be abandoned. They expect food standards to be maintained and labelled.

In other parts of the country, large employers may be threatening to leave if a No Deal Brexit goes ahead. People who are concerned about this need to talk about it and communicate their concerns.

Wherever we live we can still influence politics. We can write to our MPs and we can work together locally in a common sense and unemotional way. We can promote the cultural and societal values we share. It is early days but we can and must work together to fix our broken democracy.