Following a thread: untangling the story of a homespun product

A quick google search told me that the ISCC was established in 1935. 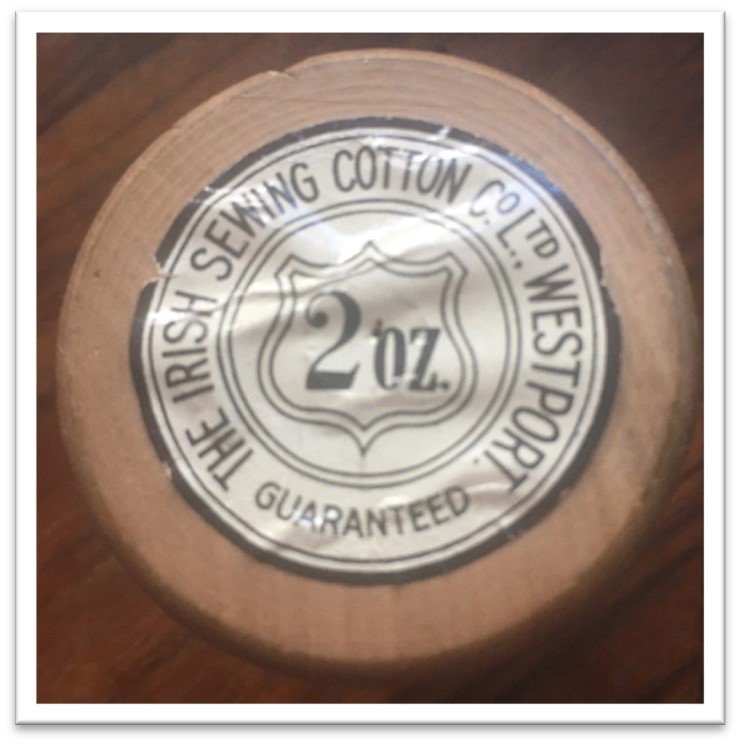 I found this reel of cotton in my sewing basket, and I don’t remember how it got there. It’s obviously old, from the style of the label, and the fact the reel is wooden rather than plastic. Maybe my mother acquired it in the mid-1960s when our family spent a couple of years in Antrim. Maybe it was unearthed from one of the old houses we have lived in since. I investigated the history of The Irish Sewing Cotton Company (ISCC) of Westport, County Mayo, and it was more interesting than I expected.

A quick google search told me that the ISCC was established in 1935. In the proceedings of the Irish House of Commons – the Dáil that year, the Minister for Industry and Commerce, Sean Lemass, said the new Free State was too dependent on foreign textile supplies. He wanted a thread company set up in the west of Ireland, and did so under a new government scheme, called the ‘Reserved Commodity Order’ (RCO). Sewing cotton was the first RCO instigated in the Free State, to control the price of thread and to provide for the sewing needs of the whole of Ireland. Although in theory, there could be many RCOs, in practice, there was often only one issued for each industry sector, and the state therefore created several near-monopolies.

As an aside, Sean Lemass was an interesting character, infamous for an incident in 1916 when he was a sixteen-year-old nationalist cleaning an illegal gun at home in Dublin. The gun went off and he shot dead his toddler brother. Undeterred by this tragedy he went on to be one of the key movers in the Easter Rising, to kill British soldiers on the day of the 1920 ‘Bloody Sunday’ incident and to be imprisoned by the British. After independence, Lemass became a Sinn Fein TD in 1924, leaving the party with Eamon De Valera to found Fianna Fail, and he himself became Taoiseach after De Valera’s retirement from politics. In Ireland, you can really feel that proverb: one man’s terrorist is another man’s freedom fighter.

At the time The Irish Sewing Cotton Company was established, Ireland had only been independent from Britain for fourteen years. The Irish Civil War had followed, then the economy was affected by the worldwide Great Depression. Ireland was excruciatingly poor, and the Taoiseach, Eamon de Valera, wanted to generate Irish jobs and Irish products for Irish people. In effect, a form of nationalist ‘import substitution’ was in play, designed to make the country self-sufficient and to unhitch the economy from that of its biggest trading partner and former colonial power, the United Kingdom. This concept may seem familiar in 2020s Britain. The Mayo News reflects that:

“The motivation for protection was the need to create an Irish manufacturing sector from an almost zero base, partition having split off the heavily industrialised Belfast region, leaving the Free State with the modest remainder.”

The ‘Anglo-Irish Trade War’ as it was known, began in 1933 and lasted until 1938. Tariffs and quotas were raised against British goods, and of course the British government retaliated with penalties on Irish exports. All the subsequent commentary on this period reflects that the Trade War did considerable damage to the Irish economy, keeping the country in poverty. The British economy, which was much larger and more diverse, and traded extensively with ‘Empire’ countries, did not feel the pain so keenly.

But in that Dáil debate in 1935, TD General Richard Mulcahy (Fine Gael) spoke against the government’s policy, and was worried that, because of capital investment, set-up and training costs, the new monopoly’s sewing thread was going to prove more expensive than the British equivalent.

William Norton, Labour TD for Kildare, was also uncomfortable with the situation, and seemed exercised that Minister Lemass could not tell him what proportion of the jobs created would be held by men, in an industry dominated by female labour. Nevertheless, the company was formed, and managed by one Charles Hughes, a Westport draper, whose family firm persists as Portwest, a manufacturer of workwear and PPE.

Within a few months, The Irish Sewing Cotton Company was being discussed in the Dáil again. It was struggling to supply enough thread to drapers around the country and other supplies were having to be imported after all. It was also in trouble for only supplying thread suitable for sewing machines, when most families in the poorer parts of Ireland had no sewing machines, sewed by hand, and needed a different gauge of thread. The ISCC was forcing distributors to buy wholesale bundles of thread of different gauges, but some of its rural customers knew they could not sell a large proportion of that bundle. TD James Dillon remonstrated with Sean Lemass in the Dáil that the ROC had left the Irish people worse off than when they were dependent on British imports:

“I understood that the terms and prices of the Irish Sewing Cotton Company were to be the same as those which applied before the monopoly was created—before foreign thread was excluded. At no time did any of the firms associated with the Central Agency — J.P. Coats, Alexanders and Clarkes—or, I think, the British Thread Company, ever ask you to take any thread but the thread you required. None of these companies ever stipulated that a merchant should order No. 10, No. 30, No. 60 or No. 40. Whatever a merchant wanted they were willing to supply at the list price. This is a completely new departure…”

And so it became clear that the De Valera government’s policy of ‘import substitution’ had led to a distortion of the market, as monopoly positions often do. With increased prices and reduced choices, the makers and menders of Ireland had been stitched up. These protectionist policies persisted until the 1950s, and the Mayo News article quoted above says:

“By the mid-1950s the Irish economy had hit rock bottom with regular balance of payments crises, peak emigration of 80,000 in 1958 and a population reduced to 2.8 million. With a few exceptions, protection and insulation from the world had failed miserably.”

My own parents-in-law were just two among the tens of thousands who left Ireland in the 1950s because there was not enough work at home. But now in 2021, it is the UK that has reduced its ability to trade freely, so my husband has retraced his parents’ steps for similar work-related reasons. Meanwhile we are watching the fallout from Brexit from the safe haven of an EU member state. It seems that forcing a break with a larger trading partner on your doorstep, and therefore restricting your ability to import and export, might lead to higher prices, an inferior selection of goods in shops and ultimately to the ruin of your own economy. I’ll leave it to you to tie up the loose ends.