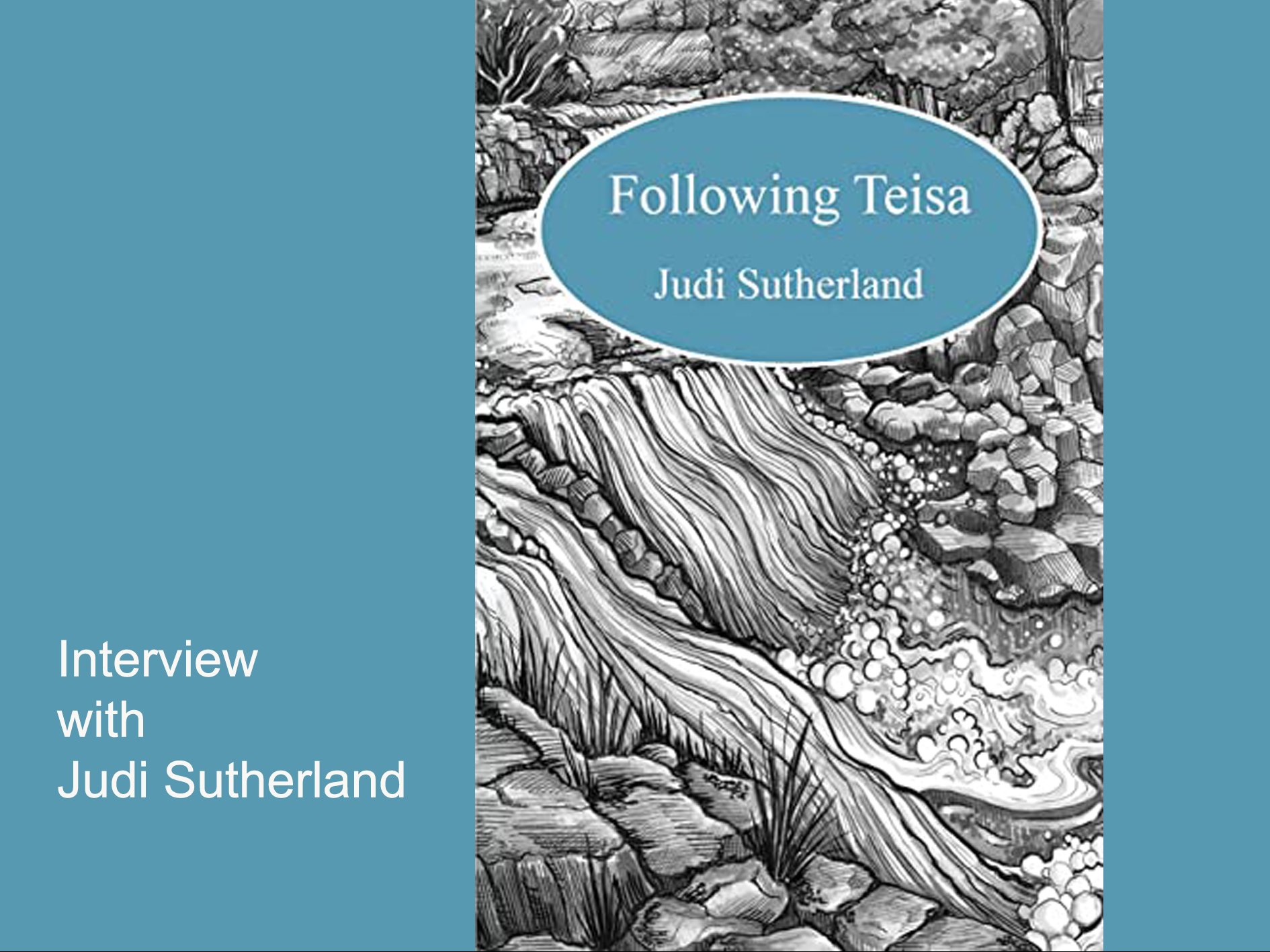 The poem tracks the trails of the River Tees, famous for its industrial history and bridges, through some perhaps unexpected twists and turns…

Ok, Judi, thanks for taking the time out to chat about your new epic poem Following Teisa. Before we get into the poem itself, how’s life in Ireland? Is there much of a literary scene where you are?

We have landed in a really lovely place, beside the sea in North County Dublin. Covid has prevented me from really exploring the literary scene, but things are opening up now, and I’m part of a tiny poetry group of three local poets. So, not bad, I would say.

Excellent, I’ll have to come over and visit. Now then… Teisa… I have memories of standing with you under the Tees Transporter Bridge, little knowing you were planning an epic poem! It might sound like a trite question but what was it about the river that inspired you to start writing the poem?

When we moved from Oxfordshire to Barnard Castle in 2014, I realised I knew very little about the local geography. I could see the River Tees flowing through the town, and because I went to some poetry nights in Middlesbrough, I saw the river much further downstream. I started to wonder about where it went between those places. Then I stumbled on a poem called “Teisa” written by an unknown poet called Anne Wilson in 1778, which tells the story of the Tees from source to mouth, so I thought I might repeat her journey and see what had changed and what hadn’t.

Yes, I must admit I hadn’t come across Anne’s poem either. I know during the height of its working life, the Tees’ course changed somewhere around Thornaby/Stockton. So, industrialisation and post-industrialisation aside, what else has changed, do you think?

In Teesdale, reservoirs were built on the Tees (Cow Green) and on its tributaries, the Lune and the Balder. These were intended to provide a steady flow of water for the chemical industry on Teesside. As a by-product of that, the dangerous wave known as the “Tees Roll” was consigned to history, because the flow of water can now be controlled by dams.

In Wilson’s day, Yarm was a sizeable port, although it took several days for boats to get there on the incoming tides. Stockton put a stop to that, by building a bridge that tall-masted ships couldn’t get under. Now, of course, the Tees barrage has changed the flow of the river. There were actually two places which were straightened, as you mention, to ease the flow of shipping at Stockton.

When Wilson was writing, Middlesbrough did not exist other than as a tiny hamlet. So the town and its bridges are a major change. I wonder what she would think of the great Victorian town we can see now…

I have to say I love the way that the feel of the poem changes as the river winds and weaves its way. The writing style for example in Kirkcarrion feels perfectly rural compared to, say, The Black Path. Was this intentional or did you just pick up your pen and try to reflect what you saw and its effect on you?

I didn’t want this book to be all “nature writing”, full of lovely birds and flowers – although there is of course some of that. I want to look equally on everything I saw, so in Middleton I mention the lead miners, I visit the pumping station at Broken Scar, and I mention the fly tipping I saw at Hurworth. The story of the river isn’t just about beautiful things, it’s also about the human relationship with the river for good or ill.

So the use we have put it to for fishing, abstracting water, shipping, all of that went into the poem. That much was intentional. I was less interested in praising or criticising, more interested in just recording what the places are like.

Yes, that angle of human interaction with the river is an interesting one to me. I recognise the ‘biscuit-sweet / exhaust of Frutarom’s spray-dried flavours’ at Teesmouth! Given the length of the Tees and all the locations/human uses, it must have taken a good while for you to research and write the poem…?

About four years! Of course (excuse the pun) I was only skimming the surface. A poem is not a map and you can’t represent every metre of the river. If it wasn’t for lockdown and then having to move away from the area, the book might have been a lot thicker! I am aware that there are lots of people, including quite a number of poets, who know the Tees better than I do, and who have written about it in more detail. I just came into the area as on “offcomer” and wrote about as much as I could in the time I had. I walked as much of the Teesdale Way as possible, and backed that up with some online research. It still feels very incomplete.

Oh, I think you’re being a bit hard on yourself there. I think those of us who grew up around the Tees can sometimes fall into the trap of either overdoing the ‘dirty old river’ thing (guilty as charged) or we can talk about it wistfully as if it’s some kind of mythical giant. You have brought an unsentimental outsider’s eye to it, and the book is all the better for it. (And you know how rubbish we Smoggies are at giving praise!)

The next question has to be the one everyone will expect… what was the bit of the river that you look back on most fondly, your favourite part?

There are so many lovely places! Eggleston Bridge where I use to drive across to Mickleton for choir practice every Tuesday, the wonky planks of Whorlton Bridge, the tiny spa fountain at Gainford, the seals at the barrage, the Transporter Bridge… but if I really had to choose, I’d pick the waterfalls at Low Force, where the limestone slabs are a great place to eat a picnic, and you can cross the wobbly Wynch Bridge to see the fantastic range of wildflowers on the western bank. People living near the Tees are extremely lucky.

Ah, close to my favourite bit – High Force. So spectacular. So where can readers buy Following Teisa?

From my publisher, The Book Mill, or online from Amazon, The Book Depository, or Wordery. I’m told there are copies for sale at the Teesdale Mercury shop in Barnard Castle. And if you are in the EU, I can send you a signed copy from here in Ireland. I hope it inspires people to spend some time exploring the area (I am not being paid by the tourist board by the way).

Ok, final question… what’s next on your writing agenda? Working on anything in particular?

Well… the part of County Dublin we rocked up in is known as Fingal – “the land of the fair strangers” – and it seems that all sorts of people have arrived on this piece of coast over the centuries from the Stone Age to the present day, including Romans, Vikings, and the perfidious English. At one stage it had its own language “Fingallian” which was something like Chaucerian English.

I’ve also written about my attempts to learn Irish. I will be continuing my interest in places and their history, and their effect on people, I suppose.

Brilliant! Not. Jealous. At. All. Thanks, Judi.

LOL thank you, Harry! Go raibh maith agat and come and visit us some time!