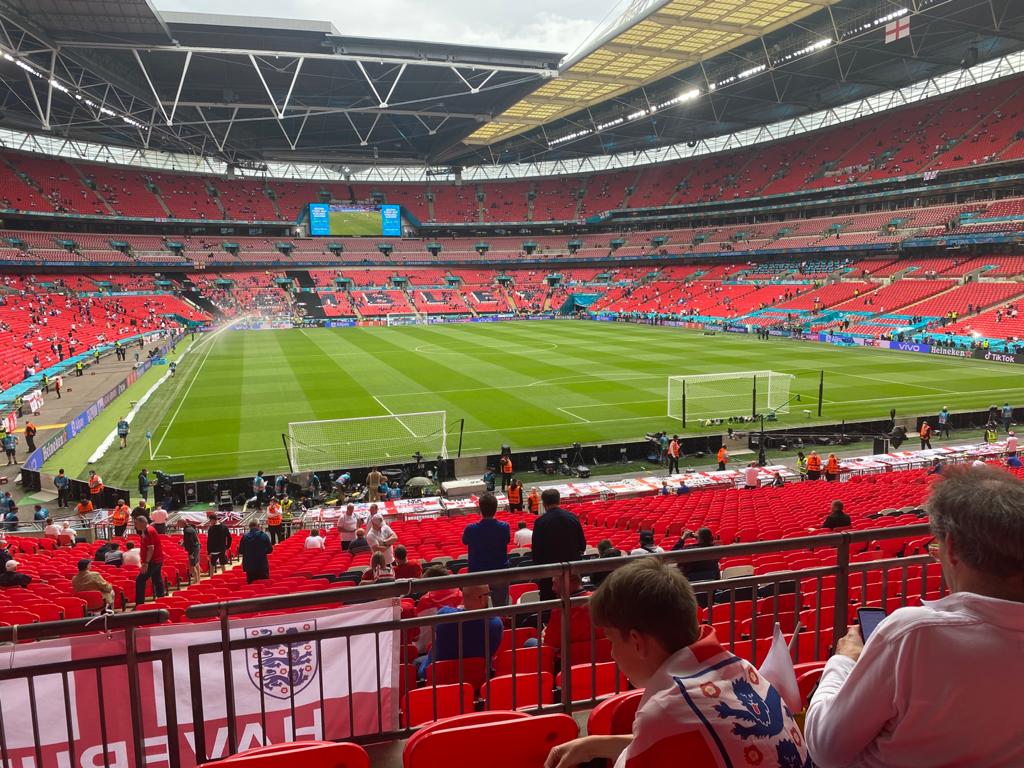 My Euro 2020 adventure – and why football HAS come home… ‘Where it began’, as Neil Diamond croons in the opening lyrics to ‘Sweet Caroline’ – adopted as an anthem by England fans this summer – was back in 2018.

My mate Andy and I joined the official England Supporters Club, specifically with a view to getting tickets for Euro 2020, knowing that most of England’s games would be played on home soil. Minimum qualification to be considered for tournament tickets was to obtain one ‘cap’ – i.e. attend one match – before the tournament in 2020.

We dutifully filed into a dreary and poorly attended qualifier at Wembley that made us wonder whether we should really bother. However, armed with our one cap each we applied for ‘Follow My Team’ tickets – which allow you to attend each game the team progresses to throughout the tournament – and were somewhat surprised to obtain confirmation that we’d attend every game at Wembley through to the final. We waited in eager anticipation.

Then Covid struck, all tickets were cancelled, Wembley Stadium’s capacity was drastically reduced, and we assumed our single caps would not qualify us for any tickets unless we (hahaha) got to the semis or final, when it was promised the capacity would be increased.

When the tournament started we were sent emails before each group game confirming that we had not qualified for tickets. Then the England v Germany knockout match arrived, and we were notified there would be three ballots for tickets. We held out little hope, but ‘won’ tickets in the third ballot at 48 hours notice. Cue huge excitement. A classic contest. An opportunity to beat Germany in the knockout stages of a tournament for the first time since 1966!

Still with greatly restricted numbers for social distancing reasons, Wembley stadium was incredibly civilised and spacious. For the same reasons, we were given an entry time slot of 2.30-3.00pm for a 5.00pm kick-off. This was a little tedious, especially with beer priced at £6.90 for a pint of Heineken in a paper cup! But the atmosphere built as kick-off approached, the match was exciting, The England team were brilliant, a dragon was slain, and we went home happy.

We expected to be nailed on for semi-final tickets, because the stadium capacity was increased, and sure enough they were duly obtained. The atmosphere for this 8.00pm kick-off was very different. Hordes of drunken young men jostled us to our seats, and then proceeded to stand in the gangway blocking our view for most of the first half. Three times I asked them nicely to move. Then I told them to. They became aggressive and threatening towards me. One of them kicked me in the back. I summoned a steward, and we were moved to superior seats for the rest of the match.

On the pitch the boys were giving their all. The tension was almost unbearable. We prevailed. We were in the final!

Sadly, my friend Andy couldn’t get a ticket for the final. He was working on the morning the tickets had to be paid for online, and the system wouldn’t allow me to purchase his ticket for him. By the time he got home and tried himself the ticketing portal had basically crashed. So I attended alone.

The contrast with the semi-final could not have been greater. I saw nothing of the thuggery involving hundreds of ticketless morons forcing entry to the stadium, and was seated in an almost genteel section of the crowd, with families and alcohol-free individuals. It seems that one’s location is purely down to luck.

The opening ceremony was tremendous. I always find these boring on TV, but it was a grand live spectacle, culminating in the Red Arrows flyover that left a trail of red, white and blue smoke over the stadium. The whole event felt slightly surreal, and this feeling was intensified when we scored in the second minute. You know the rest. Gutted doesn’t even cover it. Meagre consolation came in the form of my prediction of a draw followed by an Italy victory on penalties. I’d backed this up with a bet, which resulted in a decent contribution to the cost of my ticket; but oh how I’d rather have the glory…

Yes, gutted, but oh so proud. The team had acquitted themselves very well, and the progression to a final (and second place finish following logically on from a fourth and third place in previous contests) was a massive achievement. Proud too, of the whole ethos of this England team, with its thoughtful and considered manager and its mature, intelligent, and well-rounded young players. Several times during the tournament I found myself picking up interviews on the radio halfway through and wondering who this articulate commentator or journalist was, only to then discover that it was a member of the squad.

And yes, football has come home. In 1996 the song ‘Football’s Coming Home’ was written to celebrate the fact that England was to host a major tournament for the first time in 30 years (of hurt). The game was coming home to the country that gave it to the world. It was not a song about winning, or even aspiring to win.

Newcastle’s Best Summer Ever, 2021: Kenton and beyond