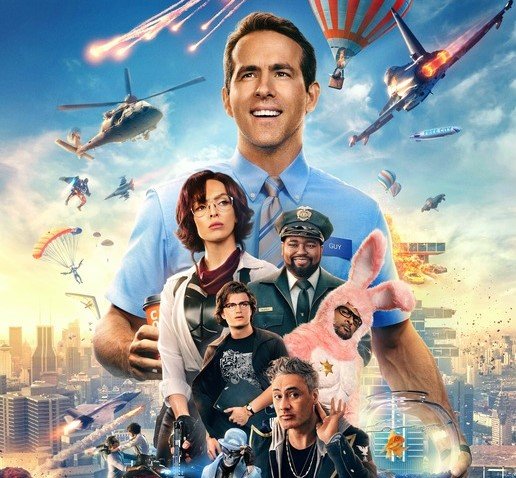 Guy (Ryan Reynolds) is just an average bank teller going about his life, when he discovers that he’s really a non-playable character in a Grand Theft Auto-esque open world video game called Free World and that the game’s creator Antwone (Taika Waititi) is going to delete the server within a couple of days. While the premise is essentially a variation on the Jim Carrey classic The Truman Show with games replacing reality TV, there’s a lot of potential for a fun and intriguing comedy.

Reynolds is the best thing about the film (which was clearly a passion project for him as he is also credited as one of the producers). He portrays Guy with such a cheery and earnest attitude even when being mistreated by players that the audience roots for him, and he bring a lot of pathos to the scenes where Guy contemplates his existence after he finds out the truth. He also has great chemistry with Lil Rel Howery, who plays his best friend, and Jodie Comer, who plays Milly, a programmer Guy falls in love with. The romance between Guy and Milly is sweet and has the audience’s sympathy despite it being obvious that it’s not going to work out as one of them is a computer simulation.

The video game setting also allows for some very creative action scenes but doesn’t let the film fall into the trap of just feeling like you’re watching somebody playing a game. The film is also consistently funny, particularly the moments that satirise gaming culture. The only parts where the jokes fall flat are a handful of pop culture references to priorities like Star Wars and The Avengers that feel forced.

Unfortunately, the film ends up being quite generic and derivative of other, better films. Aside from the earlier mentioned The Truman Show, there are glasses that allow Guy to see what his world really is just like in They Live and whenever Guy is killed and wakes up in his bedroom is reminiscent of similar scenes in Groundhog Day. Milly is almost a virtual copy of the love interest in The Lego Movie at times, with her gaming avatar even looking somewhat like a live action equivalent. As a result, the film lacks any real memorable moments.

Ironically this seems to go against one of the main themes of the story. At one point it’s suggested to Antwan (the villain of the piece) that he make his next game an original idea instead of just doing a sequel to Free World, which he reacts to with confusion and asks why you wouldn’t just try to make more money with an existing brand. The film’s own lack of originality makes this commentary feel hollow and insincere. It also doesn’t help that the film’s distributor 20TH Century Studios is owned by Disney, a company that has become notorious for relying on its known IPs in the past decade.

Ultimately Free Guy is a fun experience at the cinema with a strong central performance, but possibly not one you’ll remember afterwards.

No ‘levelling up’ for the North East: another broken promise

No 'levelling up' for the North East: another broken promise