Free School Meals is a new show by Unfolding Theatre, inspired by Marcus Rashford and performed by children at Northern Stage. 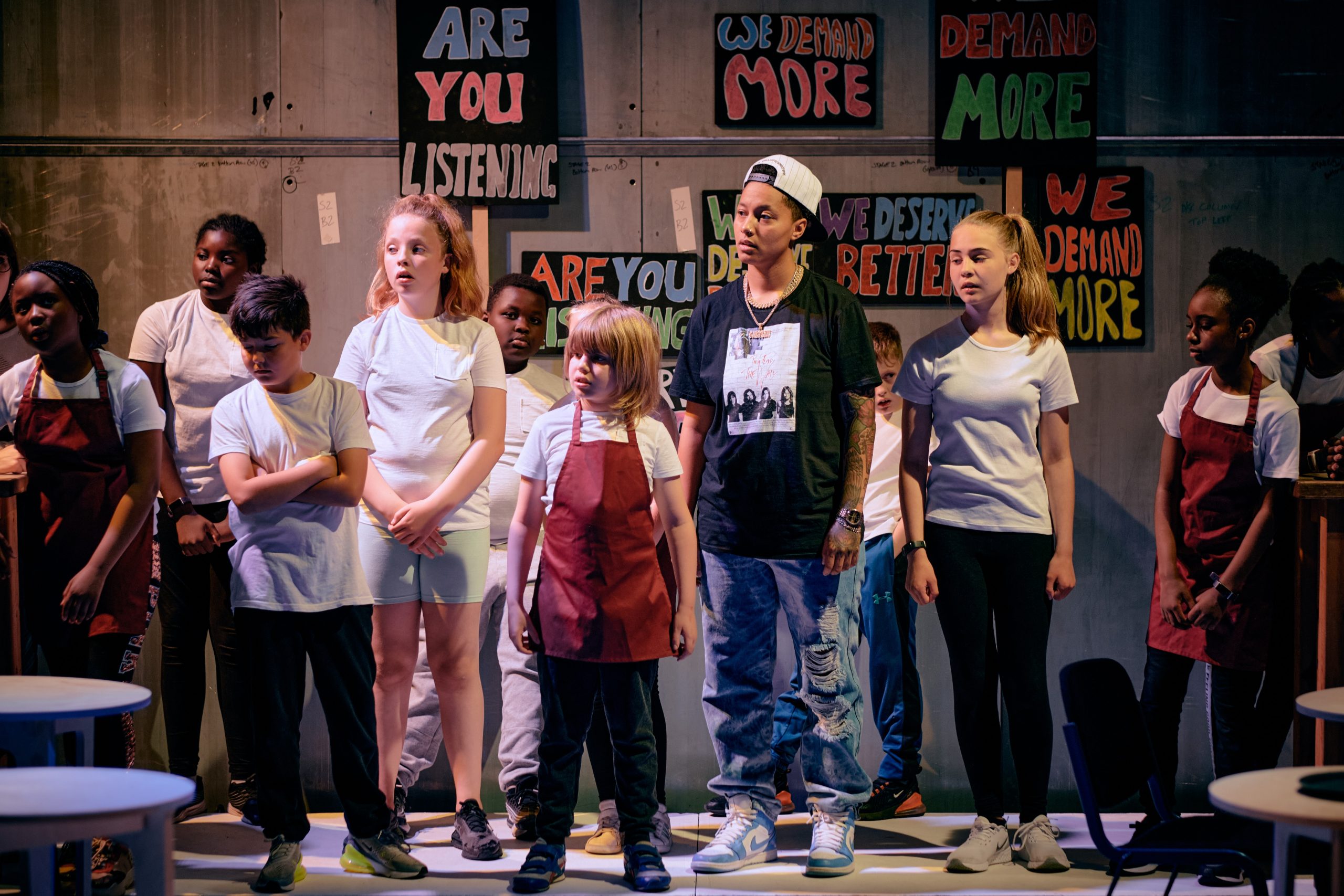 During the pandemic, kids were given food parcels with ten cheese slices, a Frube and half a carrot. The kids are pretty outraged. They think people deserve better. So they’re taking over and turning the tables, dishing up delicious bites, brilliant beats and tastes of a better future. Written by Luca Rutherford and co-created with 40+ school children, Free School Meals is set in The Future – a restaurant run by children serving up super fresh ingredients and a healthy portion of home truths.

The idea for Free School Meals

Director Annie Rigby explains how the show came about:

“Bringing people together is what Unfolding Theatre is all about, and welcoming people is a big part of our ethos – we’ve baked bread, served drinks and cooked pancakes for families on their doorsteps during lockdown and we wanted our next show to be even more ambitious in how it hosted its audience. Inspired by Marcus Rashford’s brilliant campaign against the inadequate food parcels offered to families during the pandemic and having listened to more than 4,000 children and young people tell us about the change they wanted to see in the world in our Multiverse Lab project, we started thinking about inequality, protest and hope for change. Then, like many of our best ideas, no one can remember who said it. But someone said – what if we made a show set in a restaurant run by children?”

The cast and creative team

As with all of Unfolding Theatre’s work, participation drives the creative process. For Free School Meals, the team has created a fictional world for their young co-creators to play in – a restaurant where the children are in charge. The creative team is working with 40+ children aged 8-12 to explore what they want to say in this space. In weekly workshops, they are talking about politics, about hopes for the future and what they think needs to change.

“I have always been fascinated by children’s imagination and curiosity. You hear children ask the question ‘why?’, often to adults’ eventual annoyance. I think this is one of the best questions in the world and it’s at the heart of the creative process for Free School Meals. It is so simple and so profound and so open.

“While writing this show, I’ve also been asking myself how to honour the imagination of children to build a better world. I’ve created a structure and woven a narrative together based on the world created in the devising process, leaving chunks unwritten, marked only with a question. We then brought these questions into the workshops with local children at Byker Primary school, because I don’t want to be an adult telling children what to say – the writing process has to honour this, giving the children agency over the words they will be speaking in the performance.”

Led by Artistic Director Annie Rigby, Unfolding Theatre brings together surprising combinations of people to better represent England’s diversity on our stages. Over the last decade, the company has built a reputation for working with all sorts of people from different walks of life to make theatre with a wild sense of humour and strength of character. Recent work includes the “Fantastic – funny, big-hearted, moving and truthful.” Putting the Band Back Together (as reviewed in the Guardian), and Hold on Let Go, a poignant show about memory described by the Scotsman as having “Infectious energy and good humour…A show to remember”. Hold on Let Go will tour across England in Spring 2022.