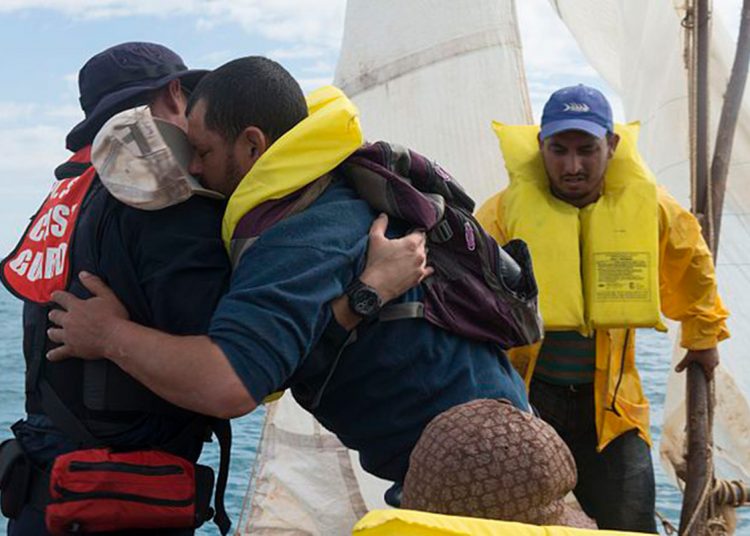 What won’t the UK government, the Prime Minister and Home Secretary use to try to cover up Partygate? Well, here’s what we know they are willing to use as of this morning – human suffering in Ukraine, a complete lack of moral probity, the Royal Navy taking over responsibility for patrolling the English Channel and now the offshoring of asylum seekers to Rwanda. Even senior Conservatives are criticising the move, for example Tobias Elwood – MP for Bournemouth East and Chair of the Defence Select Committee – has called the move a ”massive distraction from Partygate woes”.

Priti Patel may say that this is a good idea for a scheme, at a cost of £120m to you the British tax payer with further costs in the pipeline, but the fact is that the government itself warned about Rwanda’s restrictions on freedom and civil society as recently as last year; something which Lewis Goodall has pointed out on Twitter. The Home Office’s own figures show that the UK even gave asylum to Rwandan refugees as recently as 2021. With these new powers the Home Secretary would have returned these refugees to persecution in Rwanda without a second thought.

1991 might feel a very long time ago, but in that year the Commonwealth Heads of Government issued the Harare Declaration which reaffirmed their confidence in the Commonwealth but also, and incredibly important for the Home Secretary’s unilateral move, committed in Article 1 all Commonwealth nations to the promotion of international understanding and world peace.

It is difficult to see how the UK government can live up to this aim when simply offshoring male asylum-seekers directly goes against international understanding and peace. After all, we know that the move by the Home Secretary will simply re-traumatise vulnerable refugees, for example those in the LGBTQ+ community and victims of torture.

Not only this, but they will also be cut off from support from specialist civil society organisations which will not be able to operate in these conditions. Something which directly contravenes Article 4 of the Declaration, especially in relation to the commitment to the principles of human dignity and equality, and Article 9’s requirement for a Commonwealth nation to respect human rights.

Perhaps most worrying, as Lewis Goodall points to in his tweet, in Point 1 of the government’s statement from January 2021, the UK government recommended that Rwanda as a soon to be Chair-in-Office of the Commonwealth should conduct transparent, credible and independent investigations into allegations of extrajudicial killings, deaths in custody, enforced disappearances and torture, and bring perpetrators to justice.

Whether or not these investigations have occurred credibly and independently is difficult to judge. But, given that since 2014 Human Rights Watch has documented numerous cases of arbitrary arrests, detentions, prosecutions, killings, torture, enforced disappearance and more against Paul Kagame’s government’s opponents it may not be in the interest of the dominant party authoritarian dictatorship to open these to scrutiny!

The UK is not the first country to experiment with the idea of offshoring to Rwanda. In 2013 Israel signed agreements with Rwanda and Uganda, to which it began transferring Eritrean and Sudanese Asylum Seekers. As a 2018 Border Criminologies blog post makes clear the ‘Voluntary Departure’ policy was questioned from the start, given that detainees had to choose between being detained in the Holot facility (closed in 2018) or signing a document to leave ‘willingly’. When a policy was mooted in January 2018 to forcibly deport remaining asylum seekers to third countries, such was the level of international and local criticism, and social protests the Israeli government was forced to cancel its deportation plan.

The ultimate result of the policy was that refugees and asylum seekers were re-traumatised thanks to being forced to flee across Africa to Europe having been beaten, detained arbitrarily or escaping with smugglers, facing people trafficking and slavery on their journey to find safety; something which is detailed in this thread by Zoe Gardner.

Other countries which have actively chosen to offshore asylum seekers and refugees include Australia, all the evidence from this suggests that not only is the policy hugely expensive but it has a hugely damaging impact on those (of all ages) who are moved offshore. One report, from Amnesty International and the Refugee Council of Australia, noted that self-harm and suicide rates worsened among men detained on Manus Island due to cuts to health and counselling services, the heavily securitised accommodation and lack of protection for the 600 men.

Likewise the Nauru files, a cache of 2,000 leaked reports from the Australian offshore detention system, highlighted the trauma and abuse visited on children who were detained on the pacific island. The reports totalling more than eight thousand pages delivered a damning indictment of the Australian system; itemised within them were never before seen details of assaults, sexual abuse, self-harm attempts, child abuse and the dreadful living conditions endured by asylum seekers.

When combining the Australian and Israeli experiences, it can quite easily be shown quite how mentally traumatic and personally damaging forcing someone into offshore accommodation can be. Not least because of the apparent lack of checks and balances between the nation states concerned, the constant re-traumatising of a person leads to mental ill health, self-harm (for example a girl detained on Nauru sewed her lips together in 2014, but a guard simply laughed at her) and extraordinary acts of desperation.

All of this is compounded by the plan the Home Secretary is forcing onto the Statute Book – with men being removed offshore to be processed/dealt with – which not only needlessly splits up families, but also causes distress to children and makes it harder for people to rebuild their lives.

The context we find ourselves in is that the Home Secretary, presumably backed by the Prime Minister and other Cabinet colleagues, is pushing ahead with the Nationality and Borders Bill; a Bill which Together with Refugees estimates will cost the British Taxpayer £2.7bn, 51.9% of which will be made up of the cost of offshore processing alone.

Alongside this, the daily cost of detaining someone in Immigration Detention is estimated by The Migration Observatory at Oxford University to be in the order of £99 per person per day. To put this into context, £99 per day equates to £36,135 per year per person – this is a broadly similar amount to a starting salary for someone seeking an Academic Career following a PhD. All of this made worse by the fact that, along with Turkey, we are the only country in the Council of Europe to not to have an upper limit on the number of days someone can be detained.

We have all seen the devastating impacts of improper housing of asylum seekers and refugees at Napier and Penally barracks, reports finding a catalogue of failures on behalf of the Home Office – from lack of mental health support to inadequate accommodation. Why should the British tax payer be forced to pay an estimated £1.44bn per year for a plan which will destroy lives and make it harder for refugees to integrate? Perhaps Paul Mason is right, the inhuman Rwandan deportation plan is the first salvo in a 2023 General Election campaign designed to mobilise the Conservative Party’s racist base. Either way, we can end on a positive – from Syrian refugees to those coming from Ukraine, and so many other places, Britain is a welcoming country to those who are fleeing war or torture. Indeed, we have a well established and experienced network of charities supporting asylum seekers. Rather than building on this the government is pursuing a reckless strategy to grab headlines and distract from its current troubles. In so doing it has shown its true colours, despite its rhetoric on Ukraine.