The thought of terrorism returning to the streets of the UK is one to consider seriously. It is worth noting that it was barely debated during the 2016 referendum. 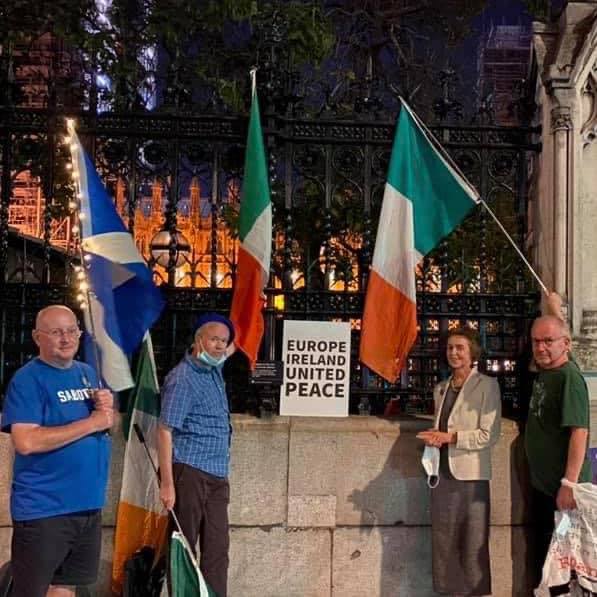 Protestors calling for peace outside parliament Photo by Sylvia Zamperini

I can’t believe that we still need to talk about peace in Ireland in September 2020. The Good Friday Agreement was signed on 10th April 1998; that’s over 22 years ago. Peace, this unique and precious commodity is being gambled with and traded in the most underhand and despicable way possible by the Westminster government.

The UK government even admitted to breaking international law in a ‘specific and limited way’ and thus caused consternation in parliament, Brussels, Dublin, Washington and even within the Tory party.

The Prime Minister has used inflammatory language such as saying that the EU has put a revolver on the table and that it would block trade between the UK and Northern Ireland. These statements were dismissed as a fabrication by the Irish Foreign Minister Simon Coveney, the EU and by Ed Miliband speaking in parliament this week. The language used by Johnson seems to come from a man desperate to achieve his aims no matter what the costs. Impressively he has managed to unite five past PMs, the former attorney general and many others in condemnation of his behaviour.

In the past the UK was known for its adherence to the highest legal standing. Indeed, on many occasions it has condemned other countries for breaking international agreements. The language and actions of the Prime Minister this week bring the UK and its government into the gutter. How can any conservative MPs vote for the new proposed legislation?

A No Deal Brexit would have grave consequences for Northern Ireland and would necessitate the creation of border infrastructure. The border with the Republic of Ireland is 499km long with 208 official crossing points with perhaps hundreds of others across ditches fields and small county lanes.

Can we put up 208 border posts to regulate travel between North and Southern Ireland?  During the ‘troubles’ there were only a handful of heavily fortified crossing points and large concrete blocks and barbed wire to prevent travel on other smaller roads. These posts were often fired upon by the IRA by mortar or gun attack.

Can you imagine a crossing point on the border now? Who is going to staff 208 crossing posts? How will the terrorists react to them? Is this a deliberate plan by Dominic Cummings to force the Irish government and the EU to put up these border infrastructures? It is reassuring that the President of the EU, Ursula Von der Leyen said that Britain cannot unilaterally change the Brexit Agreement and said again that the EU will “never backtrack “ on the Withdrawal  Treaty

The prized and much expected trade deal with the US will not happen if the Good Friday Agreement is not upheld. This has been repeated in recent days by the Speaker of the House, Nancy Pelosi.

The thought of terrorism returning to the streets of the UK is one to consider seriously. It is worth noting that it was barely debated during the 2016 referendum.

Maybe we need to refresh our minds with John Lennon’s poignant words:

“All we are saying, is give peace a chance “