While the Libertarian ideology of Cummings and his associates does not exclude Scotland per se, parts of England’s electorate do. 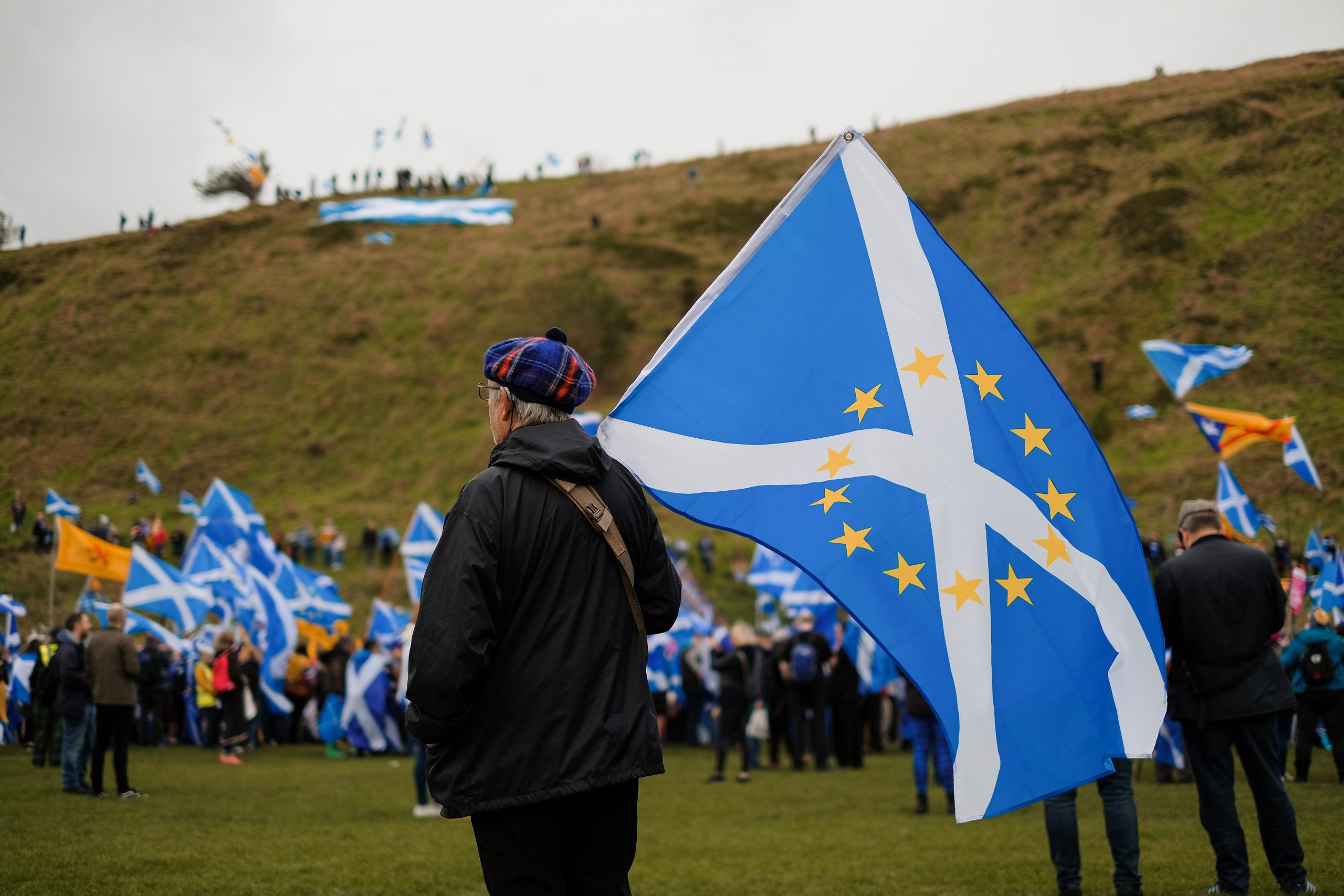 Photo by Adam Wilson on Unsplash

While the rest of us continue to navigate the global pandemic, and await a possible no-deal Brexit, former Prime Minister Gordon Brown chose recently to write about the unifying effect of devolution across the UK.  Despite appearances to the contrary, it was well timed.  While the pandemic is severe, it is also (hopefully) short term.  The need for ‘levelling up’ the regions on the other hand, is both urgent and long term.  And this government came to power on the promise to extend English devolution, in a way that had hitherto been anathema to Conservatives.

A few days later Brown published a second article,  to coincide with devolution being declared a disaster by Boris Johnson.  Did he manage to deliver a stinging rebuke?  No, the whole piece was in actual fact oddly irrelevant.

He laments a rise in the popularity of separatism in Scotland, explains why English regions need a Barnett-style formula to create a robust basis for devolution, and advocates the setting up of citizen assemblies to reset the political consensus.

He thus skirts delicately round two key issues that should, in fact, have exercised his mind – one is Brexit (it is mentioned only once), the other is the fact that, since the Independence vote in 2014, support for Labour in Scotland has collapsed.  The latter being a matter about which the UK Labour Party as a whole remains steadfastly incurious.  Time, perhaps, to have a good look at these, as they bear on the conclusions he draws about devolution.

No sooner had Brown left office in 2010, than we entered the age of the plebiscite – three referenda in six years, beginning with the AV referendum in 2011.  This is important because of the strategy then Prime Minister David Cameron employed to secure victory – give those who advocate electoral reform a platform, but not the proposed reform they actually believe in.  They lose, the status quo is maintained, job done.

Cameron, flushed with success, employs the same tactic for the Scottish Independence referendum – insist on the most disruptive form of Independence for Scotland being on the ballot, and leave the Scottish National Party (SNP) to struggle to sell it to the electorate.  He then experienced the inherent problem of plebiscites, which is that political parties do not control them.  The public does.  Ed Miliband, for one, failed to grasp this fact, and belatedly went on the attack against the SNP.  He had no idea that the SNP, while on the same side as the ‘Yes’ supporters, was only a part of the picture.  The SNP was providing fuel, but the arguments were being had in every house, bar, school and workplace in the country.  And it was there that opinion was being moulded.  Gordon Brown, in turn, has failed to appreciate that opinion expressed by plebiscite is different from policy ratified at party conference.  Politicians don’t have the means to alter it.

The Labour Party paid the price in subsequent elections, but still Gordon Brown continues to dismiss any separatist perspective as ‘grievance politics’.  It’s odd, however, that while he is critical of separatism in Scotland, he offers no opinion on the inherent separatism of Brexit.  Brexit, it seems, is a decision made.  We just have to get on with it.

From my perspective, however, there are two Brexits to deal with – the Libertarianism of Vote Leave, on the one hand, and the Rule-Britannia-end-immigration-the-EU-costs-a-fortune-and-we-don’t-get-nothing-back-black-is-white nativism of England’s Brexit-supporting public on the other.  As with the Scottish referendum, the campaign leaders fuelled the debate, but did not control it.  Thus, Vote Leave won with there being very limited discussion among the public at large about the Libertarian project.  The electorate owns its own Brexit.  And Brown appears to think the Scottish electorate is about to just suck it up.

Brown describes at length what he considers the real priorities of Scottish voters: “60% of Scots say the different nations of the UK still have more in common than divides us”, a majority view not just from those close to the Border but from the Highlands and the Industrial Central Belt. Even more say they feel strong affinity with England’s North and Midlands, and with Wales. And a bigger proportion, 76%, say “the UK and Scottish governments should be better at cooperating on issues affecting my life”. Hardly a plea for separation (quotes are original, Brown does not identify their source).

So what’s wrong with that?

What’s wrong with it is that he fails to observe that the sentiment is not mutual.  In Brexitworld, politics is hyper-partisan; sceptics are quislings and enemies of the people.  Compare Brown’s comments to these, found below the line of a recent Mail-online article:

“Frankly, put the Scottish devolution bid to the English and the Welsh to vote for and there would be a resounding ‘Get Lost’, please go and leave us in peace and then watch them die economically.”

Now it would be unwarranted to deduce from the opinion of a single bigot, the mindset of English Brexiters as a whole, but we have all seen comments like this before; in recent years applied in equal measure to the people of Scotland and Northern Ireland.  So, while the Libertarian ideology of Cummings and his associates does not exclude Scotland per se, parts of England’s electorate do.

The choice facing the people of Scotland is a stark one.  If they concede that separation from the UK will have so damaging an effect on their economy that the retention of the Union is preferable, then they are obliged to submit to this government’s Libertarian agenda, and tolerate the ongoing hostility of England’s Brexiters.  The alternative is to demand Independence from the UK, which will be so unwelcome at Westminster, that we can expect that the most severe of separations to result (let’s face it, ‘benign’ and ‘Boris Johnson’ rarely appear in the same sentence).  On the presumption that Scotland then re-joins the EU, it will trade with the UK on whatever deal is struck now between Johnson’s government and Brussels.  As Scotland relies on trade with the UK more than any other nation in Europe, it stands to be the most adversely affected by that deal.  But will Scotland’s separatists achieve their goal?

Separatist movements elsewhere, Quebec in particular, have struggled to attract majority support.  One place where it has succeeded, however, is Southern Sudan.  And there are two key features of the separation there that bear on the Scottish case.  One is that, like Scotland, the movement was strictly separatist and not nativist-nationalist, and secondly that the racist attitudes of people in Northern Sudan meant that it was widely supported there by people in both regions.  Push as well as pull.

For those in England who believe that Brexit will bring with it economic catastrophe, and that Scotland’s economy will eventually be the more robust for EU membership, there remains the question of whether, in the end, England also has something to gain from the separation.  For Brexiters there’s the satisfaction of ‘we’re better off without them’.  For anti-Brexiters there’s a more subtle advantage, which is that in a world of hyper-partisan politics, giving your opponents everything they wish for reduces the number of scapegoats they have at their disposal when things go pear-shaped.

At present there is no evidence that the popularity of Brexit is diminished (and recent popular support for cutting the UK’s international aid budget mirrors that).

If, as many believe, Brexit will be much less damaging to the EU than it will be to the UK, we can envisage a situation where there is economic growth in Scotland and economic decline in England. It becomes much harder for Brexiters to deny that Brexit is the underlying cause of that decline when the EU is on England’s northern Border, rather than across the Channel and the Irish Sea.

This does not emerge from Gordon Brown’s interpretation, because of its basic assumptions and its top-down perspective – the Union is good, and Brexit’s a done deal whose worst effects can be alleviated by reforming structures of governance.  In reality, the threat that Scottish Independence poses to Brexit is not to be underestimated.  And as Brexit remains the defining political shift of our times, no discussion of political reform can justifiably ignore it.